We're On The Road Again

We've been sitting in Lacey, Wa too long and Joe has a little "hitch itch" so here we go.  Head em up and move em out.

First a stop at Les Schawb, they open at 0800 so we were there at 0750 to top off the air in the truck and the Stream.  They are so fast and so courteous and on our way to I-5.  Our plan was to pull over after about two hours of driving and have a healthy breakfast of yogurt, apple and walnuts.  But when we left the tire place we were at the traffic light where you turn to go into Panera.  Have you ever had one of their bear claws?  They are to die for.  So we turn into the shopping center, by this time the place was starting to get crowded but we persevered through parked cars until Joe found a place that he could almost fit into.  So in I go, thinking of all those luscious pastries, bagels and bread they have.  I keep telling myself to be brave, just get a sausage egg sandwich and get out.  Easier said that done, there was a line so I had to stare at all those yummy things.  So when I got up to the counter I said:  two sausage egg sandwiches, I was getting ready to pay and then she said; Is there anything else you want.  I caved.  I quickly said ONE BEAR CLAW.  I got my stuff and hurried out to the truck and told Joe we would be splitting a bear claw down the road in a couple of hours.  He kinda gave me a little smirk.

Whenever we bring food into the truck Buddy gets real interested, probably because he is spoiled rotten, so there we was sniffing the air.  We started leaving the parking lot and Joe said; Did you put Buddy's food in?  No, I didn't, That is definitely a "blue" job, "you were suppose to do that".  Luckily we were only a couple of miles from home and it was easy to turn around and go get his food.

I'm sure there are other things we forgot.  So we finally get to I-5 and then take Hwy 18 to I-90 east.  So where are we going.  We are leaving a bit early for the winter and expect to be in Rising Sun, Maryland by Sept 21, then join the Airstream Southeast Coast Spectacular Caravan in Delaware by 10/1.  We will eventually go to Mayport,one of our favorite spots in Florida, just outside Jacksonville; down to Sarasota FL and then maybe a cruise out of Tampa to ????  Eventually be home by May 1st.  So that's it in a nutshell.  We just love Streamin across the Country, so much to see.

There is still a lot of construction on I-90, but they are making progress, I think it's been going on for 4 - 5 years.  Our trip so far has been uneventful, which is the way we like it.  The mountains look inviting and then..... we got to the area of the recent wildfires which was finally just contained a few days ago.  It's a shame that so many homes and buildings were lost.  Our favorite fruit stand is Red Sky Orchards at exit 93, we saw them on the news with lots of fire fighters there.  We stopped for some peaches that were mouth-watering and juice running down my face.  They also had a new crop of apples in, I always look forward to the new apples, they said the Gala's will be out next week which means that fall is just around the corner.

So continuing east, crossing the mighty  Columbia River and up the hill is a place to view the river and see the Wild Horse Monument.  This is the first time we have ever stopped, the view was spectacular.  The monument is up a steep dirt trail and all I had on was flip-flops.  So next time we will stop and I will have shoes on so I can go up on the Hill.

Columbia River Looking South,
From here the water still has to travel about 100 miles to the Pacific Ocean 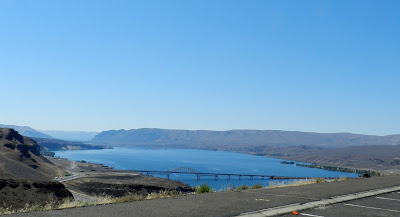 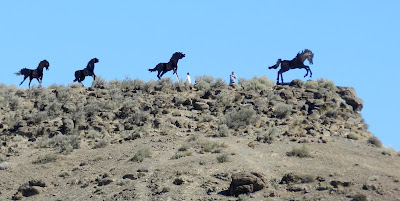 There's a big heard of them,
I was only able to get about half of them 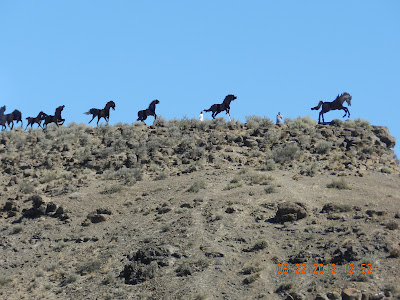 Eastern Washington (aka the other side of the mountain, or "on the east side....")
is all farming of many different grains plus corn, onions, potatoes,
alfalfa, vineyards, hops, orchards, etc

After the wheat is harvested, probably all grains,
the fields are burned to kill any fungus that may be present 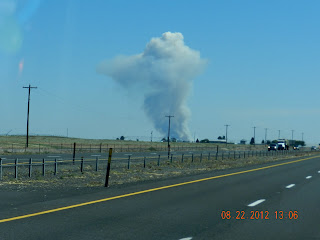 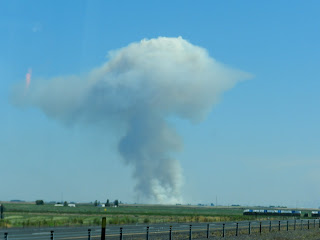 So tonight we are in Haugan, Montana at the 50,000 Casino.  They have free parking with power, on gravel.   There is a restaurant in the casino that serves OK food especially after driving about 400 miles today. We have stopped here many times, you are way off the hwy and behind the casino so it's fairly quiet at night.  A truck stop too with diesel, today $4.15 (no cash discount).  Exit 16 in Montana, on north side of I-90

Safe travels to all, have a blessed day and thanks for stopping by.