1/18 - 1/20/2-13
Destin, FL
Army Recreation Area
Destin is sort of like a mini Miami on the Gulf, hopefully it does not become another Miami.  Many water ways, white sand and very expensive boats.  The boat pictured in the background is for sale, a 38' for a mere $1,650,000.  It must have gold fixtures in the galley and head.  Of course a boat like this maybe they call is chef's kitchen.  There is only one really really tall big hotel/condo which is behind me.  They do have a really nice board walk and not too many people, but... come March it will be body to body with spring break kids. 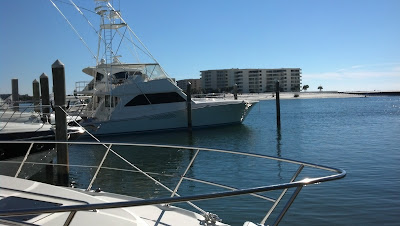 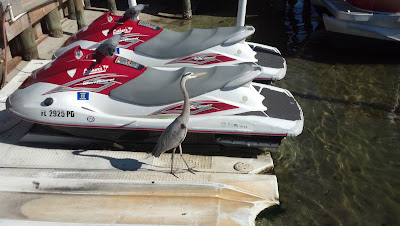 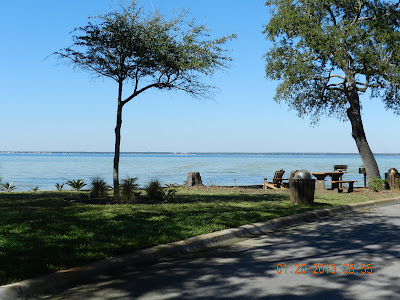 Views from the Army recreation camp 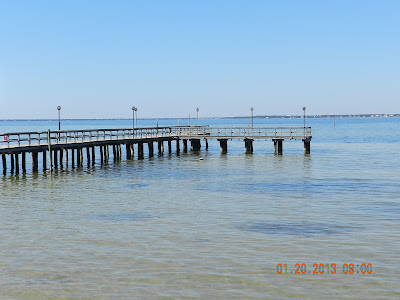 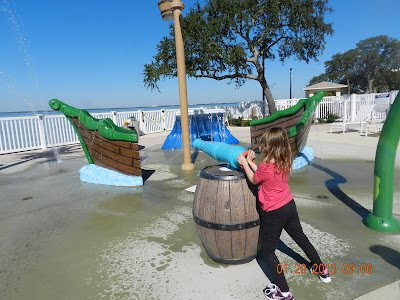 They have a fun water park but you can't see the many spouts of water coming up.  This cute little girl is shooting water out the cannon.

All and all, we had a good time, the place is just too busy for us even in this off season.  I can't imagine what it's like later on in the year.

Have a great day

Nancy
Posted by Joe and Nancy Conrad at 6:51 AM No comments:

Getting caught up again.

After our caravan we only had about 120 miles to drive to Naval Station Mayport in Jacksonville, FL.  This is one of our favorite military RV parks.  It is on the Atlantic Ocean to the east and north is the St Johns River.  The RV park looks out at two shipping channels, one for the Navy and the other is the commercial channel.  There are container ships coming through here 24/7.

Notice the rocks and cement slabs that make up this levee.  See below about Joe's accident on these. 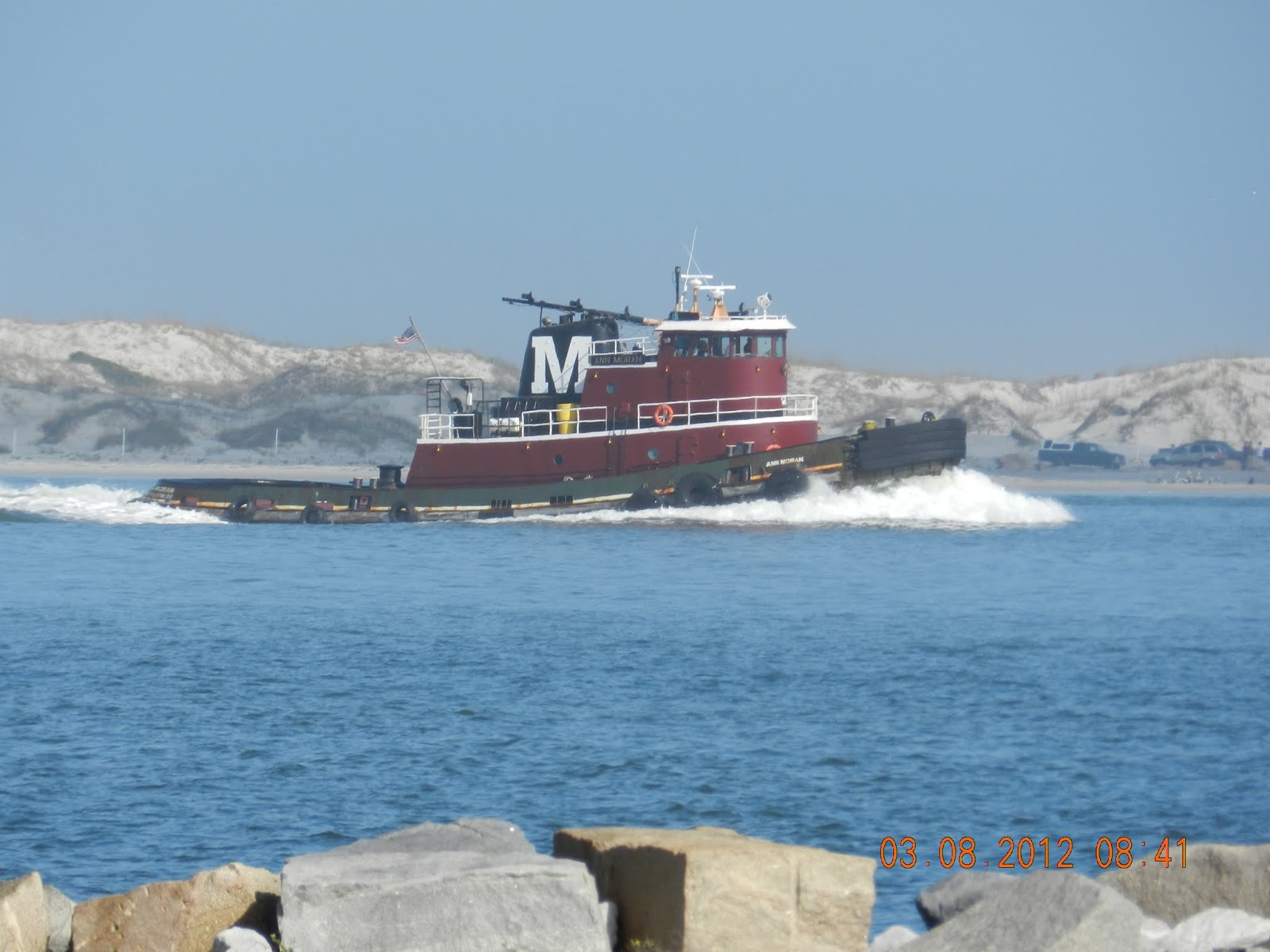 We were here last year and took many pictures so I have very few pictures time.  I love watching all the ship activity. 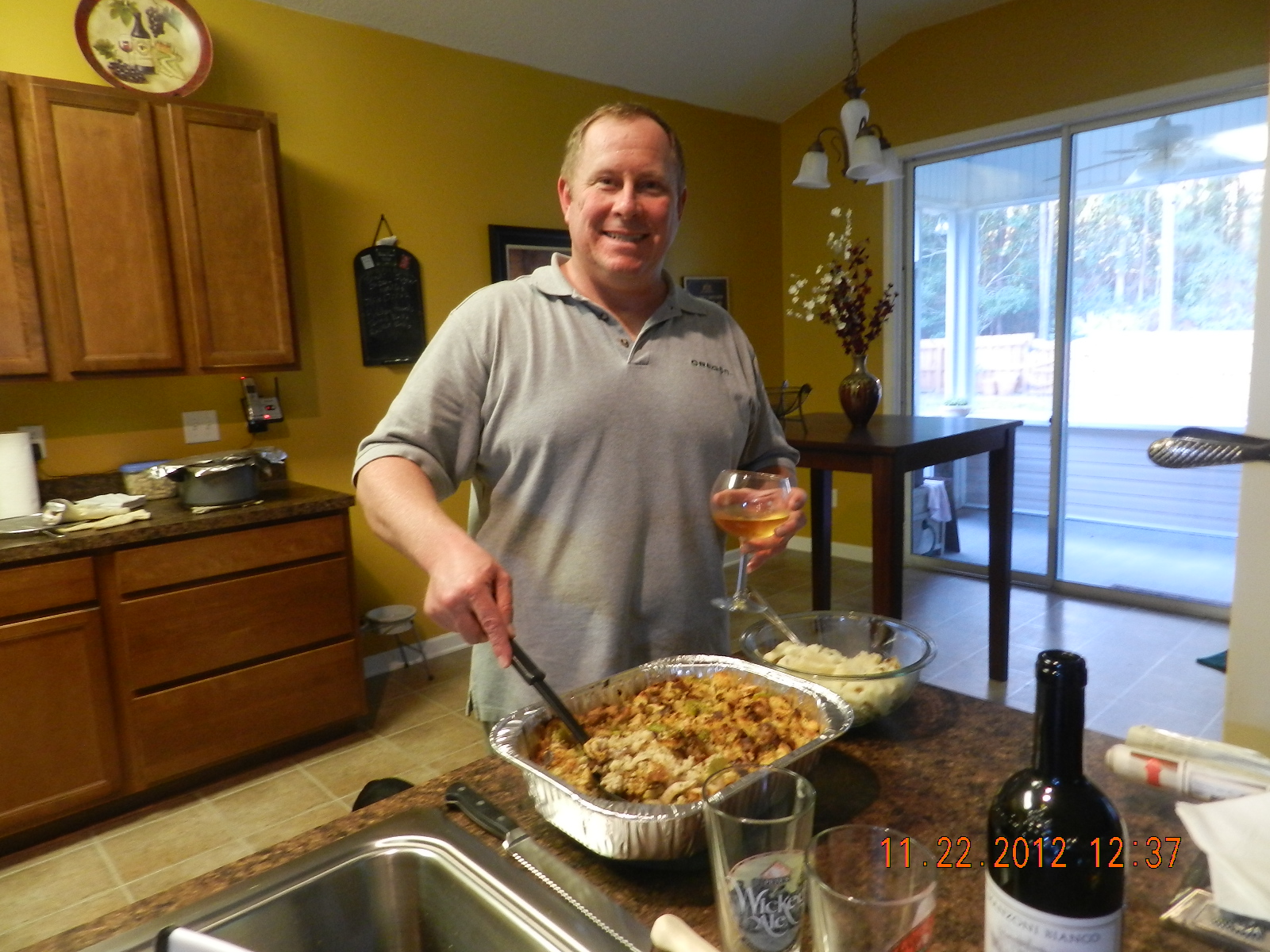 We thoroughly enjoyed Thanksgiving with my son, Tim, he is a fantastic cook.  Tim retired from the Navy about a year and a half ago and has been going to school full time.


The second week of December we moved 50 miles to Anastasia State Park in St Augustine.  Even though it rained most of the time we had a wonderful time.  The state park is great, right on the ocean and very popular,   St Augustine claims that they are the oldest city in the United States, established in 1565.  I can't imagine the hardships they had to go through.  The forest and undergrowth is very thick and then to have an organized city in 1565; these people were truly a hardy bunch. 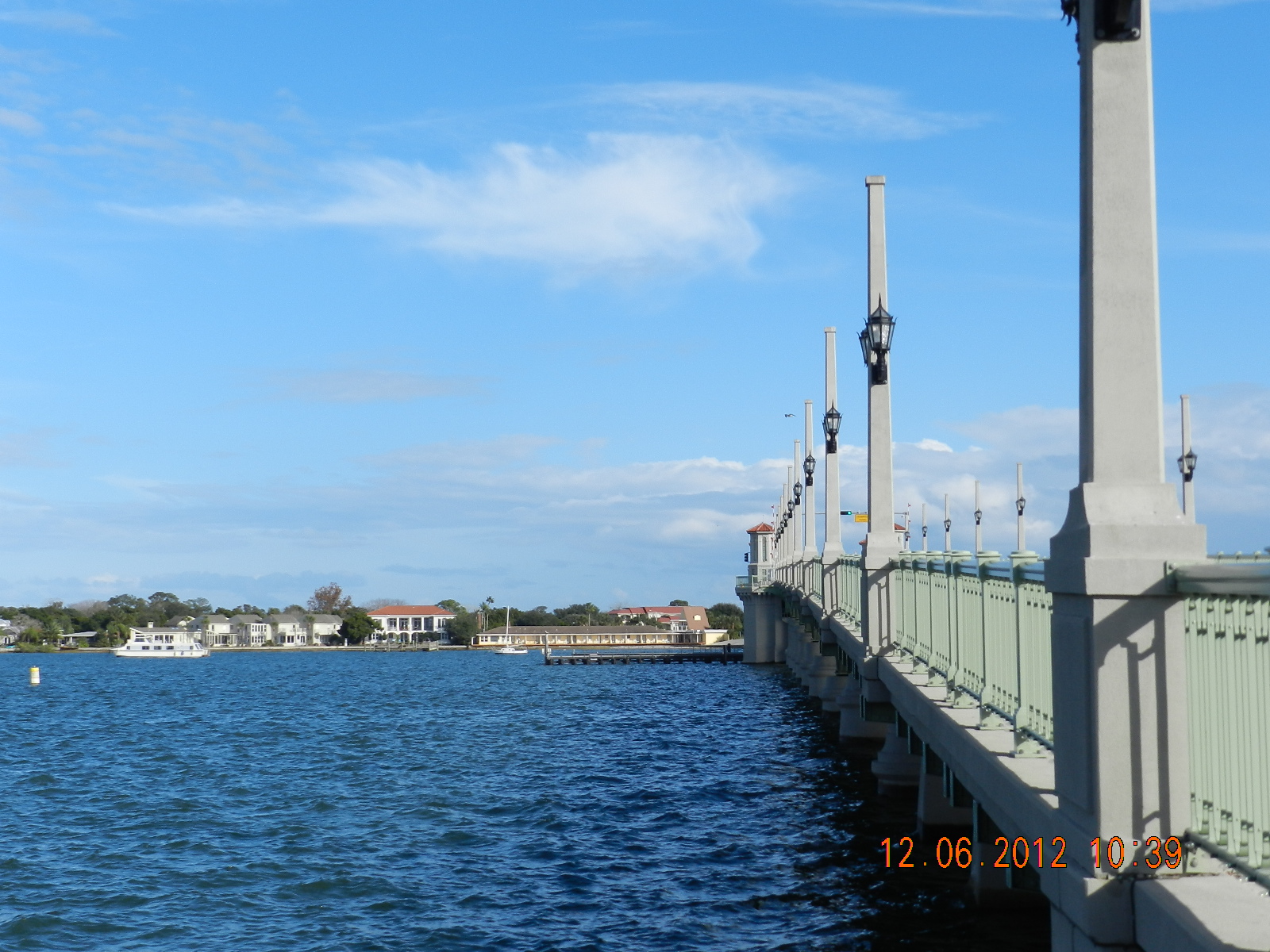 Bridge of Lions from Anastasia Island into St. Augustine. 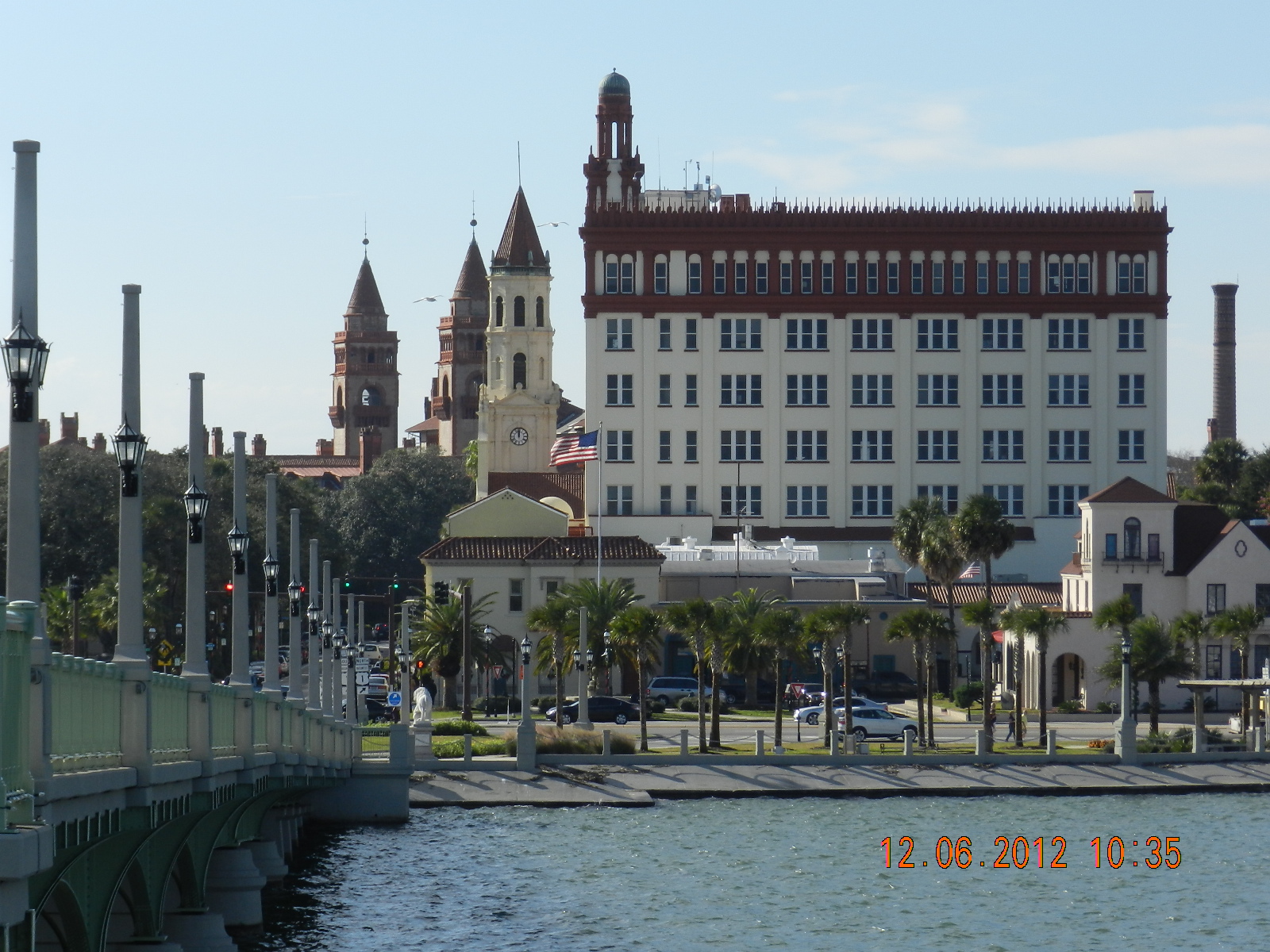 Looking into the city. 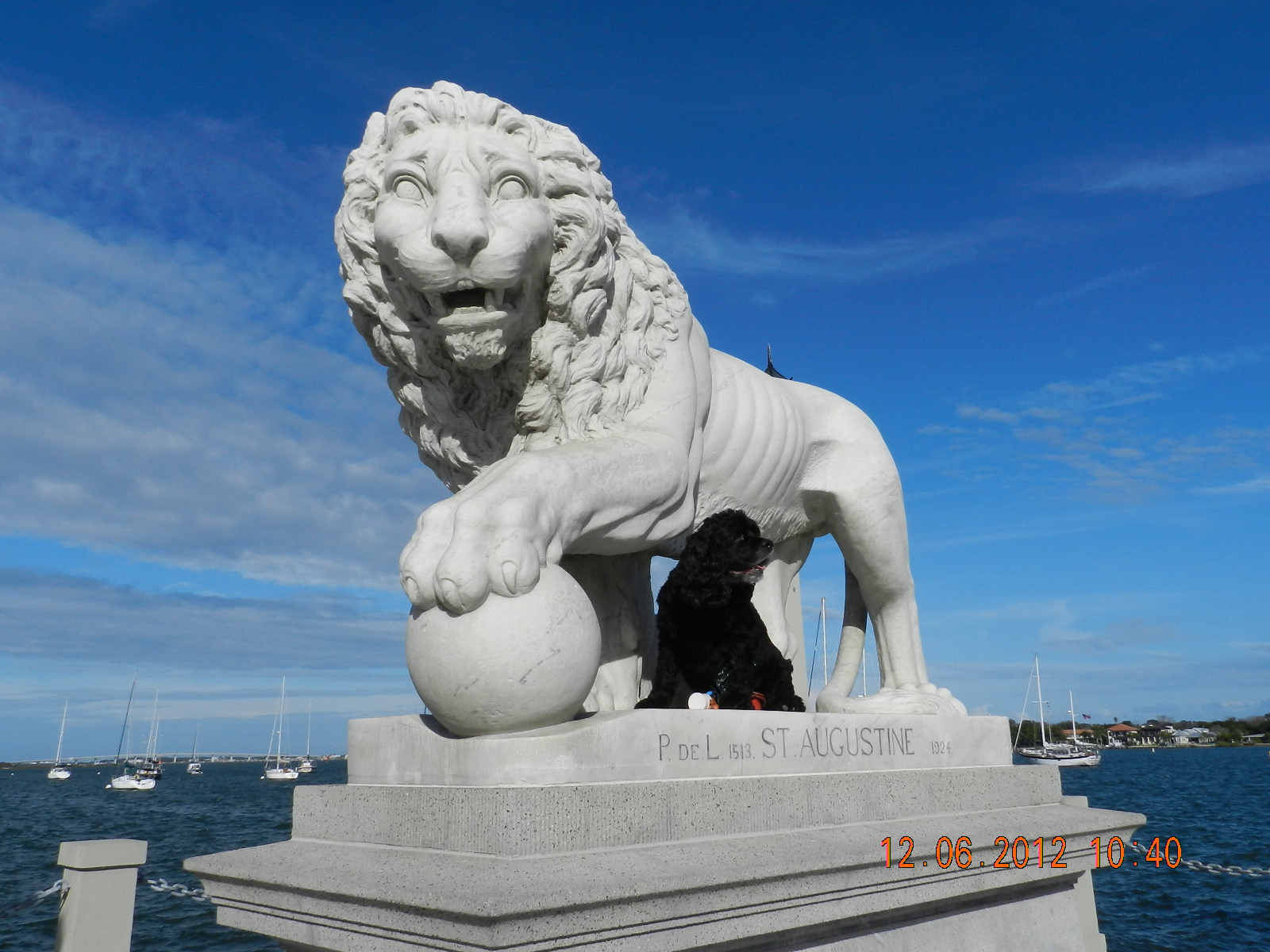 There is a pair of lions at the entrance to the bridge.  That black area under the lion is Buddy, he puts up with anything.  I had to lift him above my head to get him up there.  Then to get him down he climbed on my shoulders, what a brave guy.


Joe's accident:  Joe was out fishing on these rocks, he slipped and fell, scrapping up his shoulder, arm and leg.  I cleaned and bandaged him up, watching for any sign of infection.  It took about two weeks to heal.  Then he started feeling ill, becoming weak, unable to eat or drink, then the fever, then the chills with more fever, then a trip to the ER.  He ended up in the hospital for 8 days, and was discharged Christmas Eve at about 6 pm, they were waiting for the results of a blood test.   However he still had to go back to the hospital every day, starting on Christmas Day to continue infusion of antibiotics for the next 14 days.  It turned out that he had some nasty bacteria off those rocks when he fell: e-coli .  This is a nasty bug to get rid of.  He is now fine and no damage to his organs.

We finally left Jacksonville January 11th instead of our planned departure of 12/27/12.  We had several reservations at state parks and when I explained to Reserve America about Joe's hospitalization they waived the cancellation fees at two different parks.  I thought I would have to provide a note from the hospital, but they said no, you have been through enough.  What a pleasant surprise.

That's it for tonight, thanks for stopping by.

Nancy
Posted by Joe and Nancy Conrad at 8:40 PM 3 comments:

Today is January 30th 2013 and I have not posted since November.  Don't really know why I stopped, lazy or maybe a little depression, but I am back.

I discovered that I still had this draft that I never posted; so hear it is.  I will continue posting and get caught up.

Our caravan, "The Southeast Coast Spectacular" has certainly lived up to it's name.  We have definitely had 40 days of spectacular travels, dinners, tours, perfect weather, but most of all meeting 19 wonderful couples that all have the same visions of travel, as we do: see, do, and have fun.  This caravan is known,  in the Airstream circles as 900 miles in 40 days and 40 pounds.  Yep, we sure did eat our way down the coast.....and every bit of it was deeeeeelicious.

We visited the turtle  information/sanctuary/hospital/recovery center.  Very interesting and I would highly recommend a tour.  In fact I would like to volunteer here. 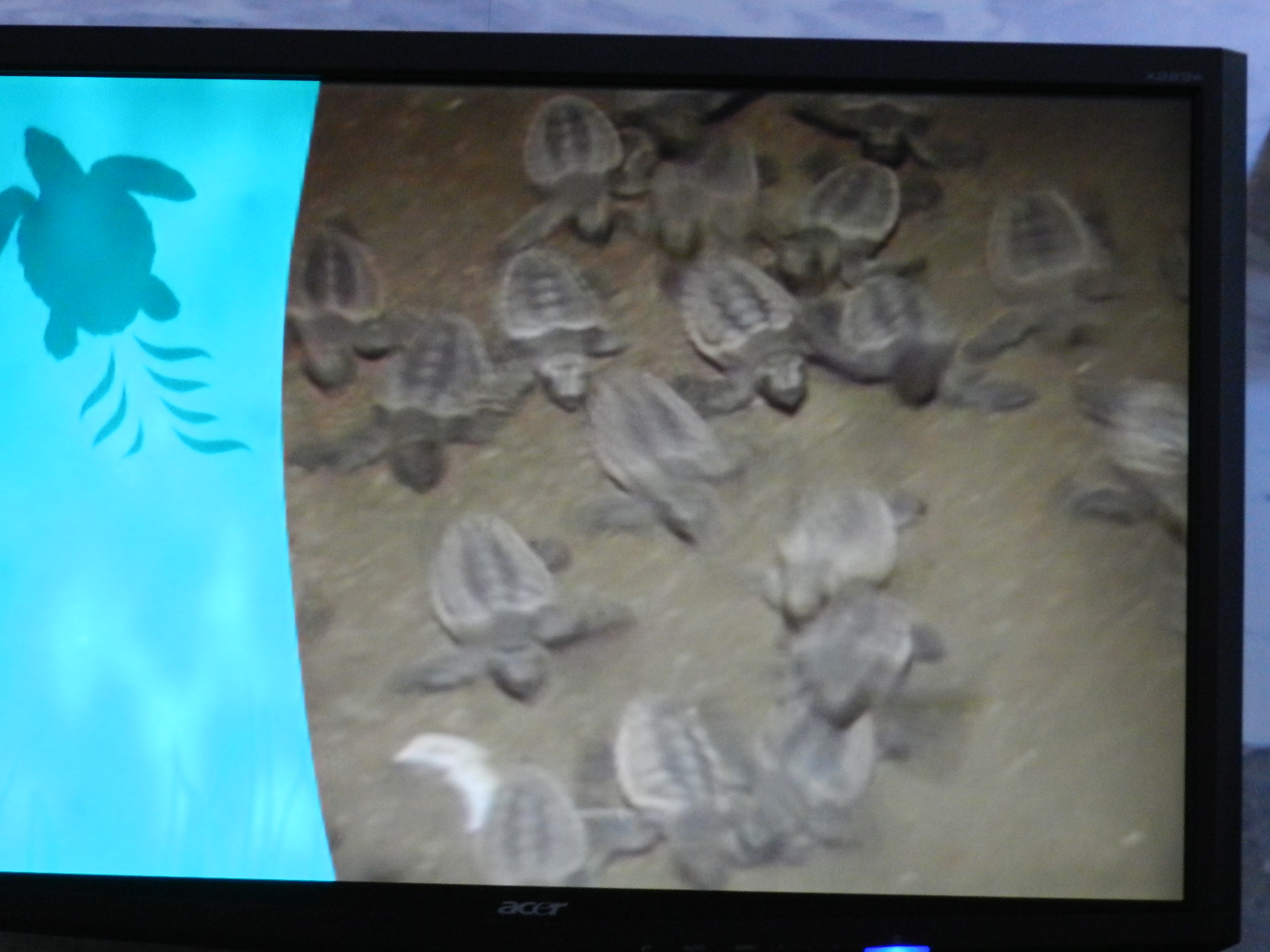 This was a severely malnourished young turtle that was found in Mayport, FL.  They have been bringing it back to health for about three months now and the plan release is next spring.  He/she has a litle paralysis going on so they put his food in the middle of a pvc frame so he has to use his flippers more to get into the frame. 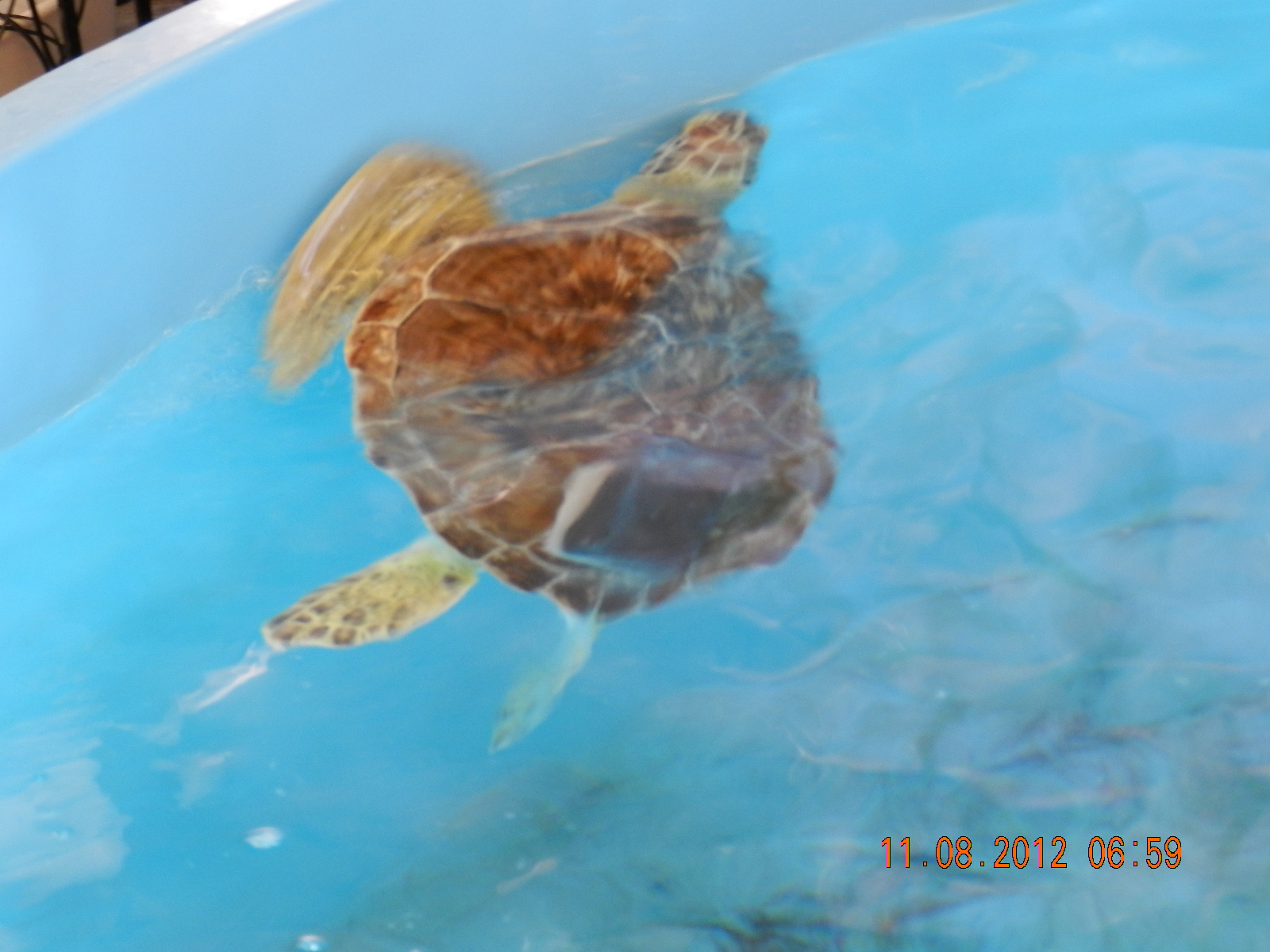 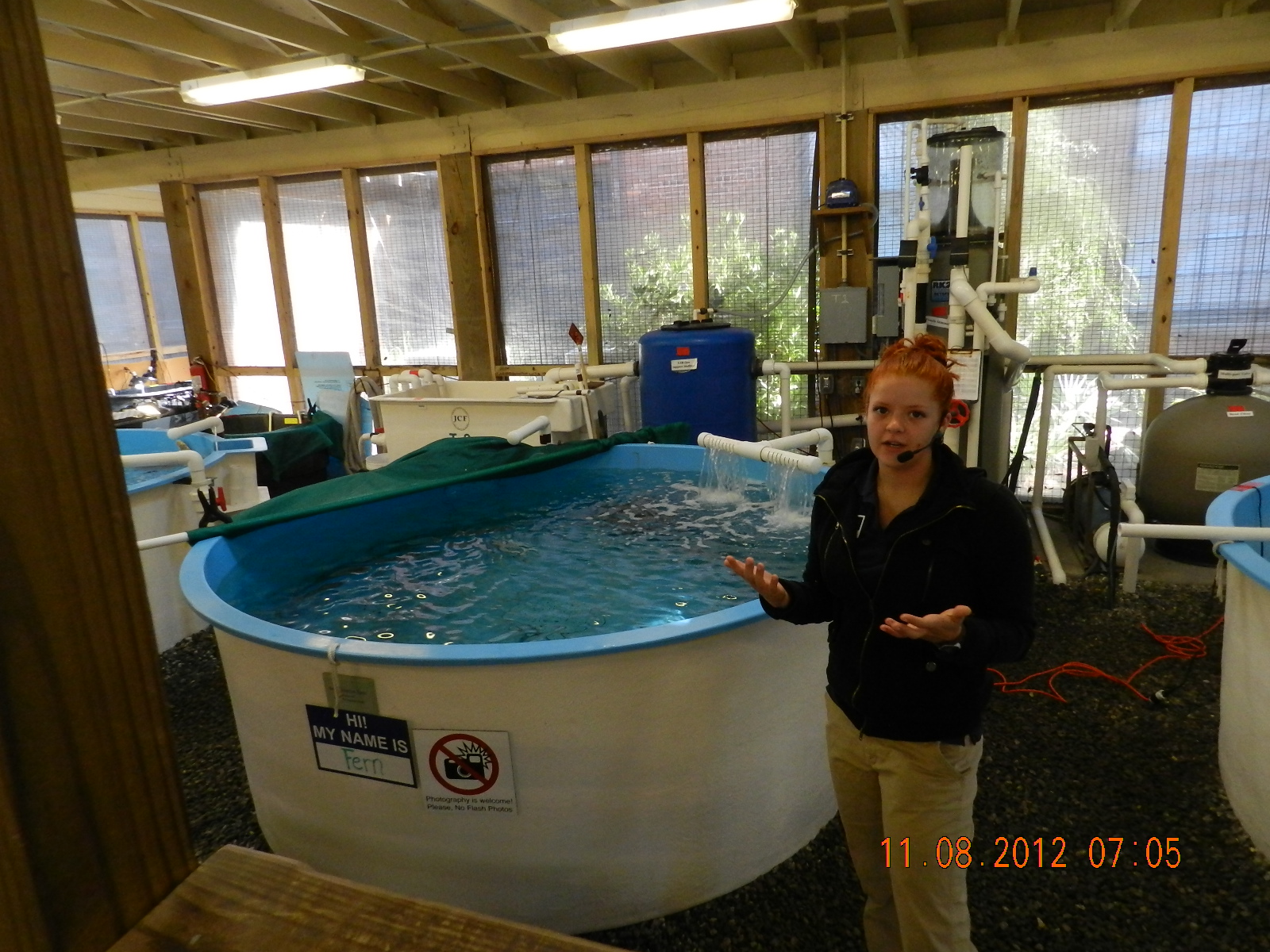 This turtle is in the surgical area having a dressing change.  He had a large hunk of shell missing when he was brought in. 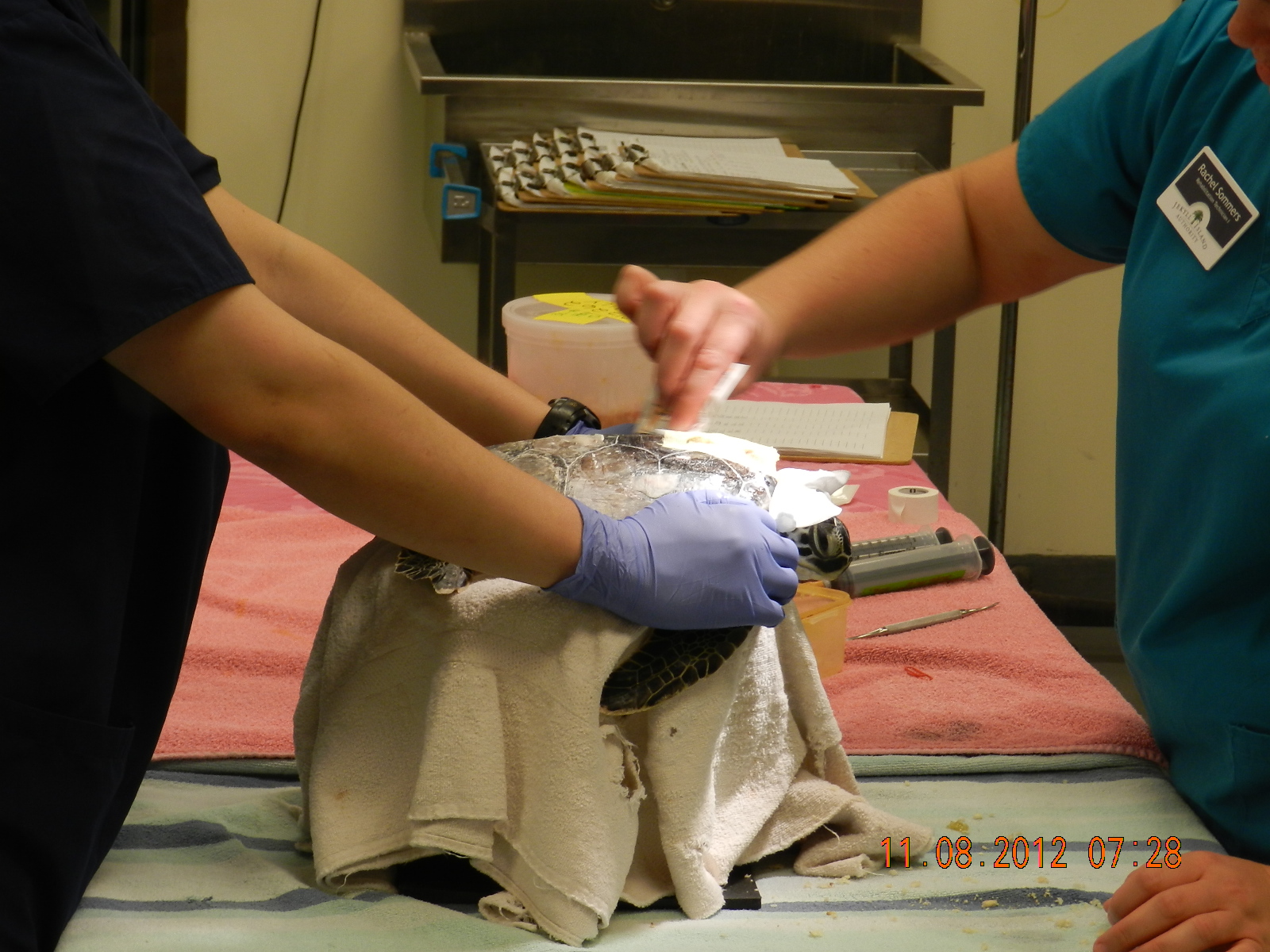 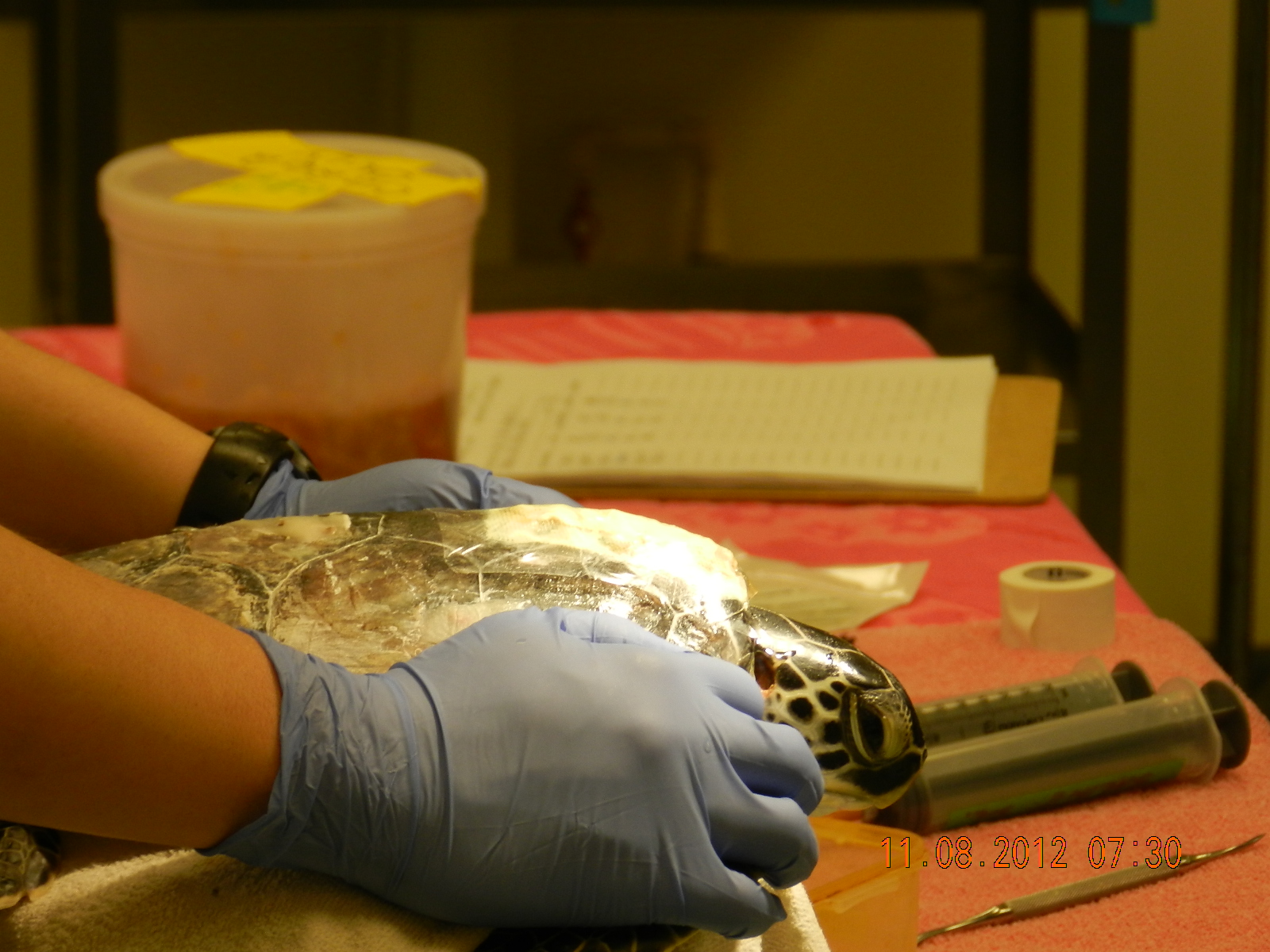 This was such an interesting place, they have a lot going on, I would like to volunteer there if we would settle down in one place long enough. 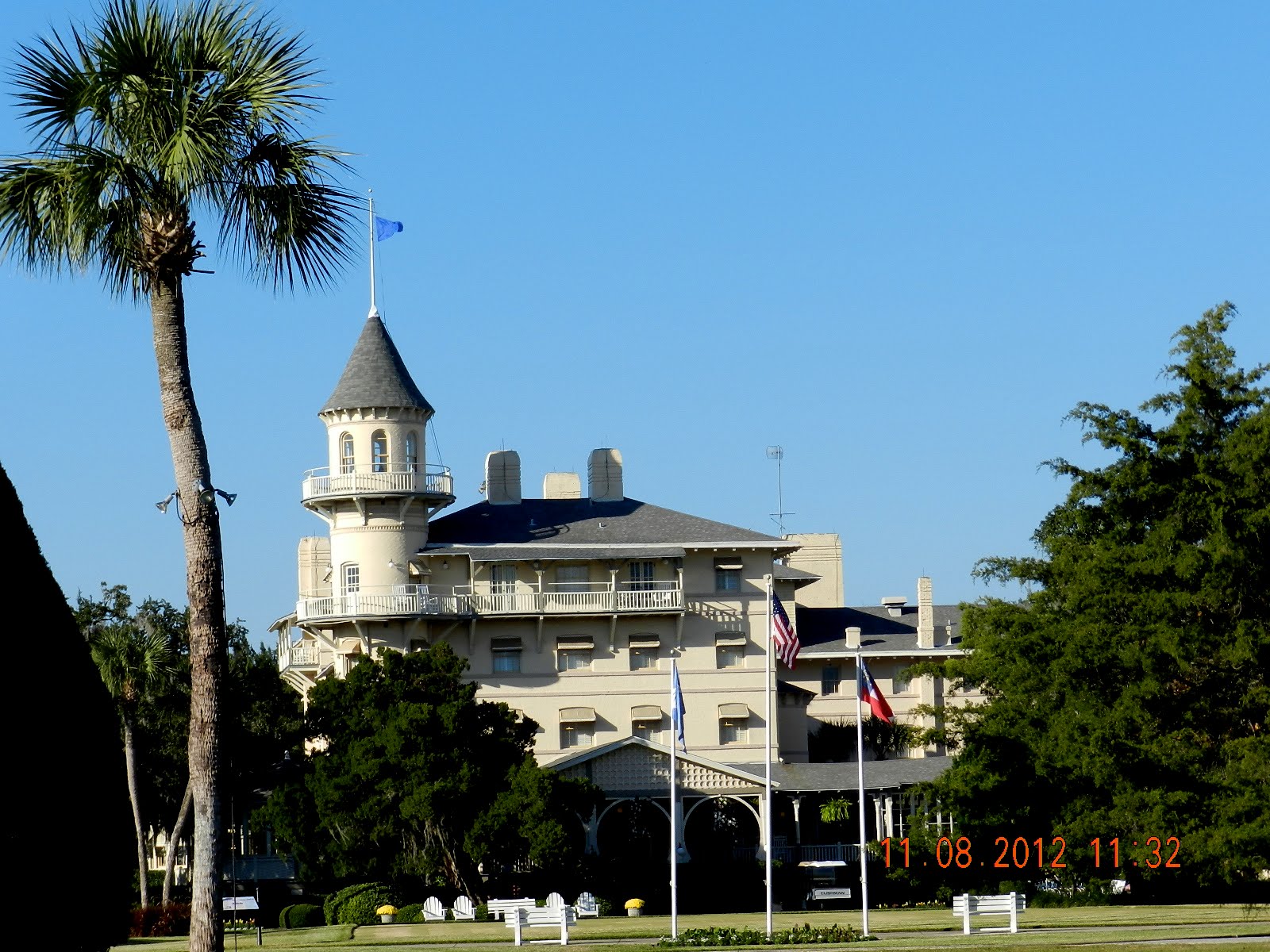 Jekyll Island Club Hotel
We had our final banquet here. 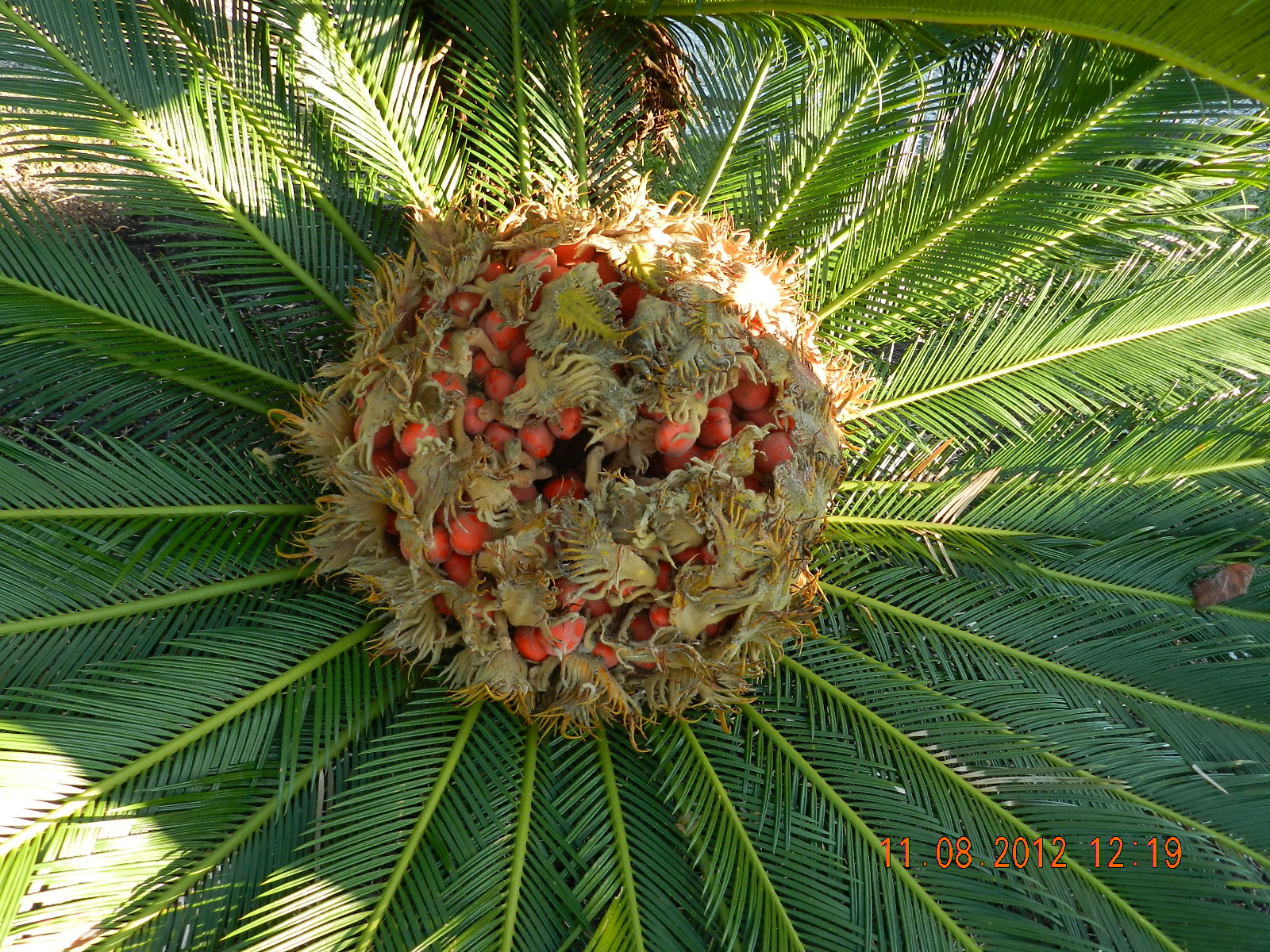 Middle of a palm 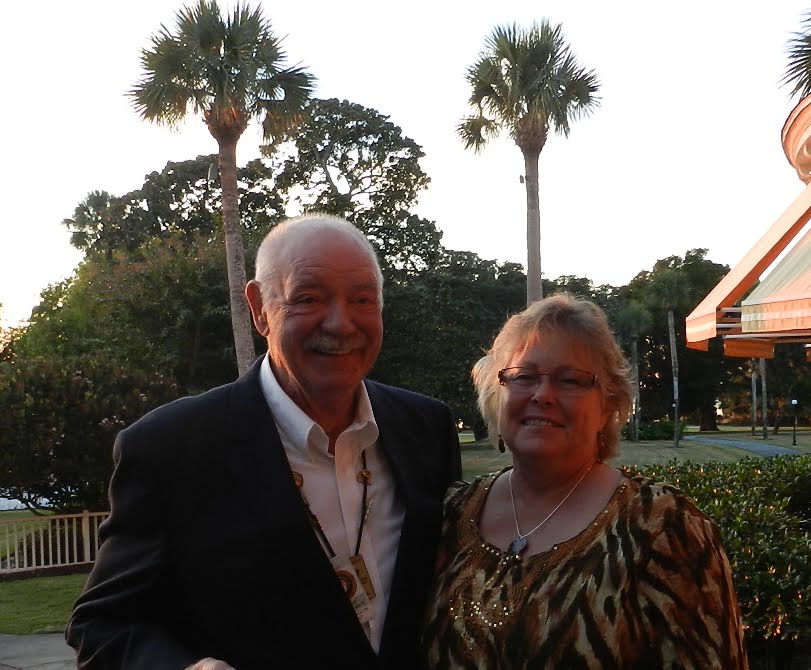 The banquet was a dressed up affair, first time in six months I think 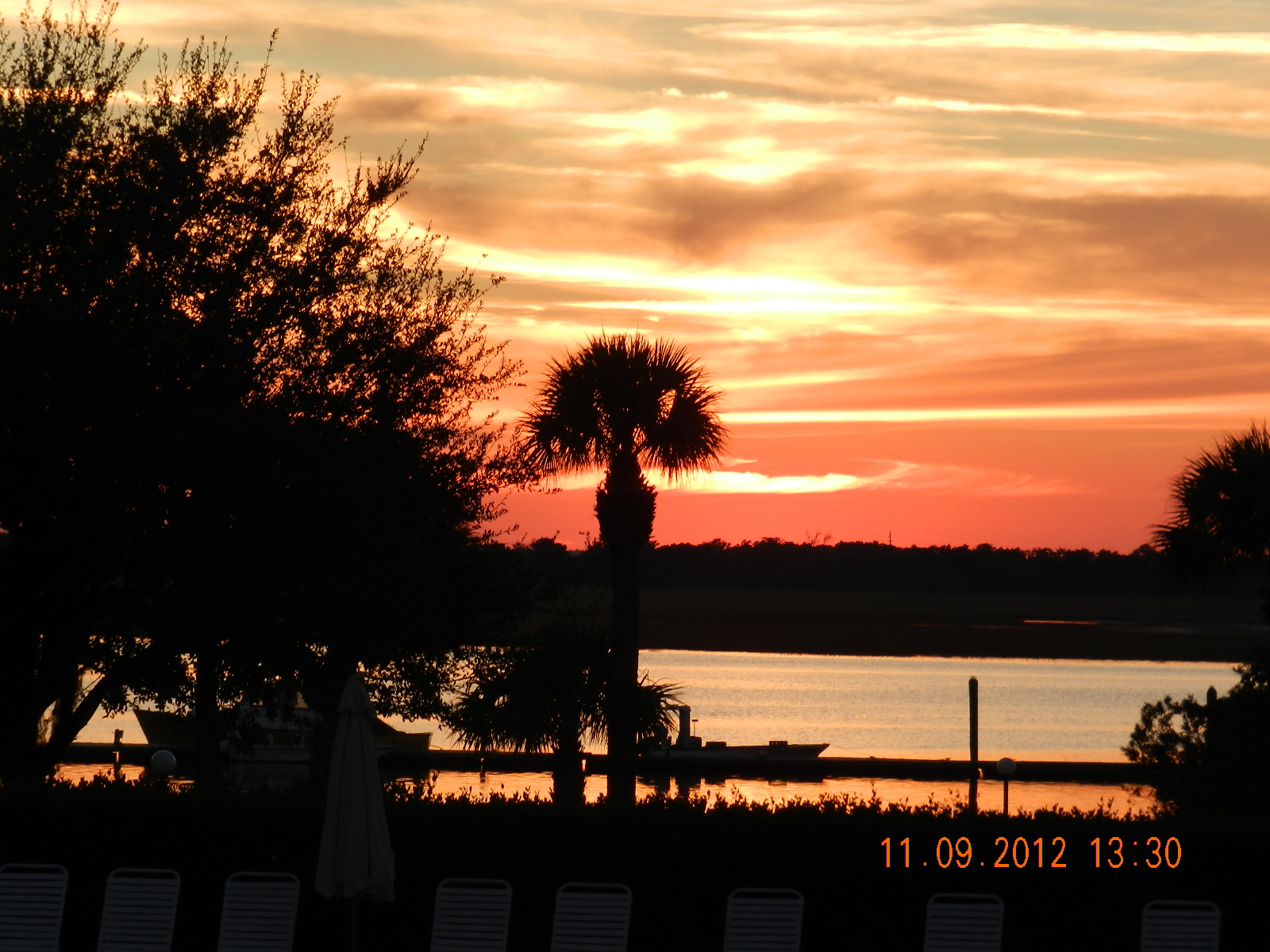 Another beautiful sunset to a perfect day. 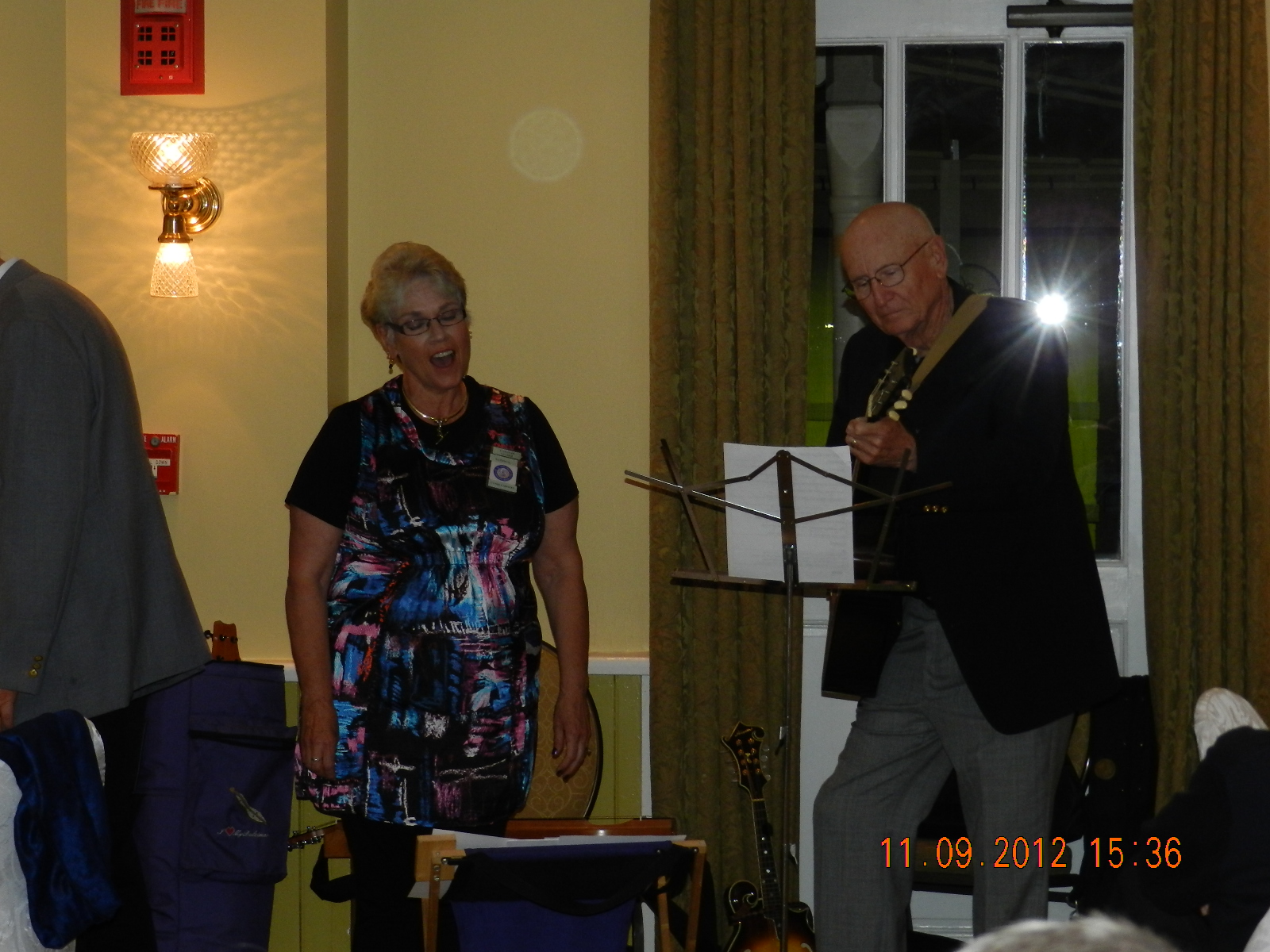 Our caravan is over and time to say good-bye.  As traditions go, we had a very nice final banquet with some music from our leaders.  This was a spectacular Airstream caravan and I highly recommend it, even if you have to be on the stand-by list.  This caravan and the Newfoundland Caravan will start on a schedule of every other year.

Next is to unwind in Jacksonville, Mayport Naval Station FamCamp, Pelican Roost.  The same place we stayed last year.

Happy trails to everyone and have a blessed day

Nancy
Posted by Joe and Nancy Conrad at 3:18 PM 1 comment: