Lets Go To The Fair

Leaving the beautiful campground of Indiana Dunes National Lakshore Park.  Great place, would absolutely go there again.  But, I was told that the State Park and National Park are packed during the summer and up to a week after Labor Day.  About half the spots were filled when we were there. Just a reminder they are dog friendly in the campground, most of the trails and the wonderful sandy beach. 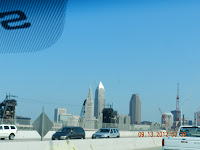 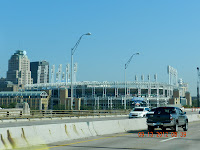 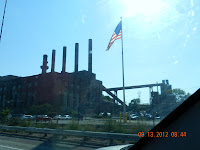 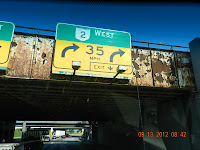 Well I just found out how to type next to a picture, of course that doesn't mean I can do it again.  I was trying to make four small pictures together.  I somehow got the first two but was not able to get this 35 mph up with the flag picture

After traveling about 150 miles we arrived in the small little community of Albion, PA where we will be for the next three nights.  There is an agricultural  fair here celebrating it's 68th year, called Albion Area Fair.  I saw this online a couple of weeks ago and thought this would be an interesting and fun place to stop.  Joe and I love horse shows, draft horse pulls, tractor pulls, goats, pigs and all those animals, so this was a natural stop for us.

I called Tim Crane who is in charge of all the camper parking, I told him that we were retired and traveling around the country in our trailer and only needed a piece of ground to stay on for three nights so we could enjoy the fair.  This was very unusual because everyone reserves at least six months ahead of time and they always stay for the entire fair, so there were no spots for another trailer.  Tim, bless his heart, found us a place, (someone had left early) that not only was level but with power.  Wow! this is livin.  But wait, that's not all.........  he also drove up the road to the VFW and led us in the back way, made sure we were settled in, we payed for the space; but wait,...... that's still not all.............. he then got on a golf cart and drove up to the fair office and got our booster buttons which gave us entrance into the fair every day which we paid for.  And still,..........that's not all.........he then drove back up to the office to get us a program.  He certainly deserves a BIG HUGE....... ATTA BOY!  Everyone we met was extremely helpful and very nice.  That's what makes this 68th fair such a huge success...........
good ole fashion attitude and country hospitality.

I think everyone in the area for miles around has an exhibit here from kindergarten on up. There is an Arts & Craft building which has exhibits for all the grades.  Some very talented youngsters displaying drawings, paintings, poems, and various items they had made. Some displays were even from school classrooms.  It appeared that most exhibits were from FFA,  4-H, Girl Scouts, Boy Scouts, etc.; judging on all the jams, jellies, pickles, fruit, maple syrup, honey and whatever can be canned was judged.   They also judge hay and alfalfa;  1st, 2nd and 3rd cuttings.  Some had nore more than 10% legumes and others had 50% legumes and various combinations.  Judging on what they called Corn Husk Broom, and on tobacco leaves and how they were wrapped, and various kinds of silage.  Everyone brought their silage in Walmart bags, the Walmart is in Erie about 30 miles away. They also had fruits, veggies, corn that was still on the stalks, sunflower stalks with the heads on and just the sunflower head along with many varities of chocolate cakes, pies, cookies, brownies, angel food cake, etc. 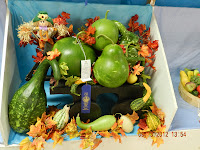 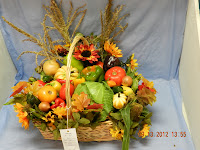 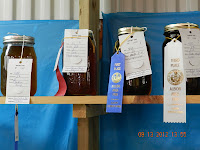 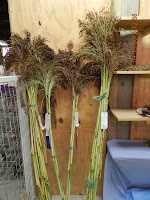 On left is the corn husk brooms 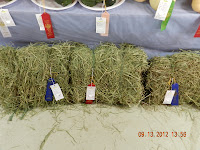 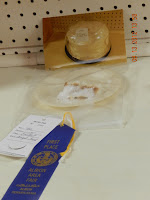 Hay and left is angel food cake.  These were all judged several days before I saw them, that's why the picture 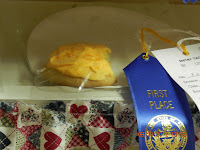 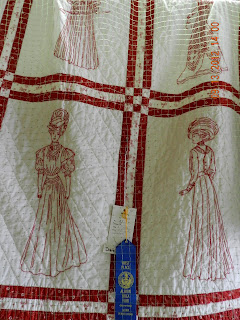 They have a huge participation in antique tractors and antique tractor pulls both in the dirt and on cement.  and then, of course, one of my favorites is the draft horses with log pulls and weight pulls.
These next pictures are draft horses (even the black) ridden in a Draft horse pleasure event. 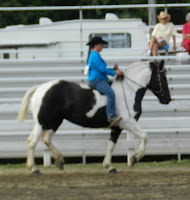 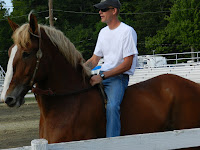 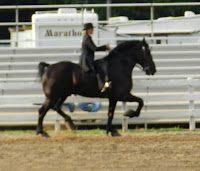 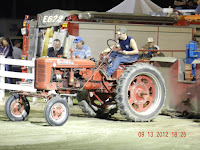 This the contraption that the antique tractors pulled.


More pictures coming soon of the Draft Horse Pulls.  They were so spectacular I think I will do a short post of just them, mostly pictures.


The food here is excellent.  We had a polish dog with all the trimings that was put on by the local fire department, spaghetti and meatballs for dinner from the Edinborough community camp, and tonight we will have BBQ chicken put on by the Lyons.  Yesterday they BBQ'd 900 chicken halves, started serving at 4:00 and was sold out by 6:20.  We missed out but we will be there earlier tomorrow, that's why we had spaghetti, which was a very good choice.

That's it for this posting, Have a Blessed day and thanks for stopping by.

Nancy
Posted by Joe and Nancy Conrad at 7:14 AM