After leaving Top of Georgia we traveled east to pick up US Hwy 441 and then headed north.  Traveling on 441 had miles and miles of antique shops on both sides of the Hwy.  I had never seen so many.  It was a beautiful drive up through the mountains to the town of Cherokee, North Carolina that lies just outside the park. 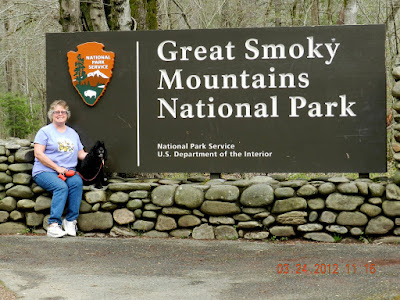 Notice the deciduous trees, they were just starting to leaf out but you have to look real close 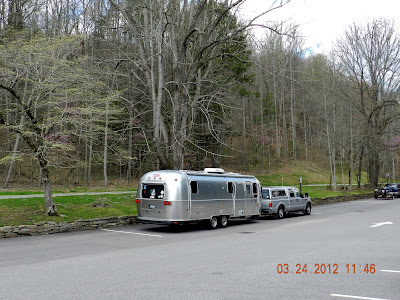 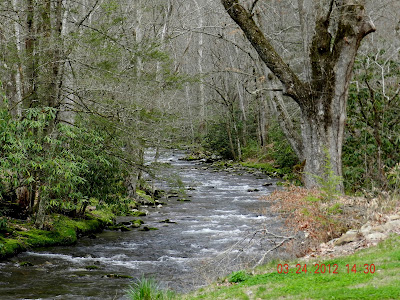 The Smokey Mountains border North Carolina and Tennessee
We wanted to drive up to Clingmans Dome which is the highest point in Tennessee
The weather was nice with blue skies and a few clouds
as we traveled along the weather turned windy, foggy and very cold, 34' 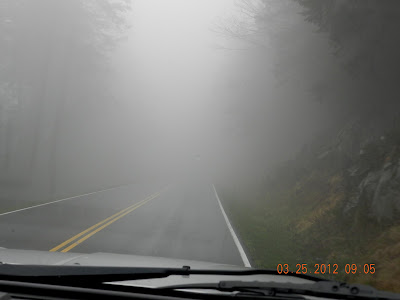 We finally got to the parking lot, the trail out to the dome is 0.7 miles on a ridge
It was too windy and cold to hike out there
However there was a little ranger station behind where I am standing and........
they had a roaring fire going in the fireplace, boy did that feel good.
The ranger said if the fog did not lift in the next 20 min they were going to close the trail
they didn't want to go on any rescues out in the fog. 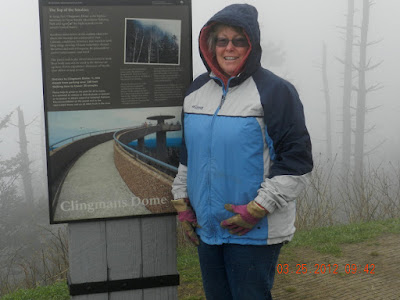 A few miles back down the road, still windy and cold but no fog 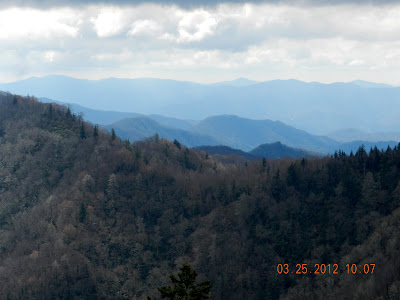 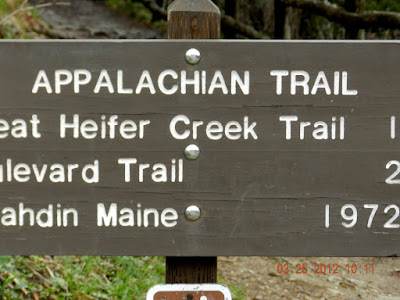 This is a very popular part of the trail and it is Spring Break
so, lots of families
I hiked out a ways but it was kinda of muddy through here. 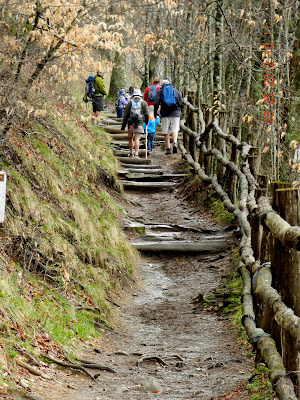 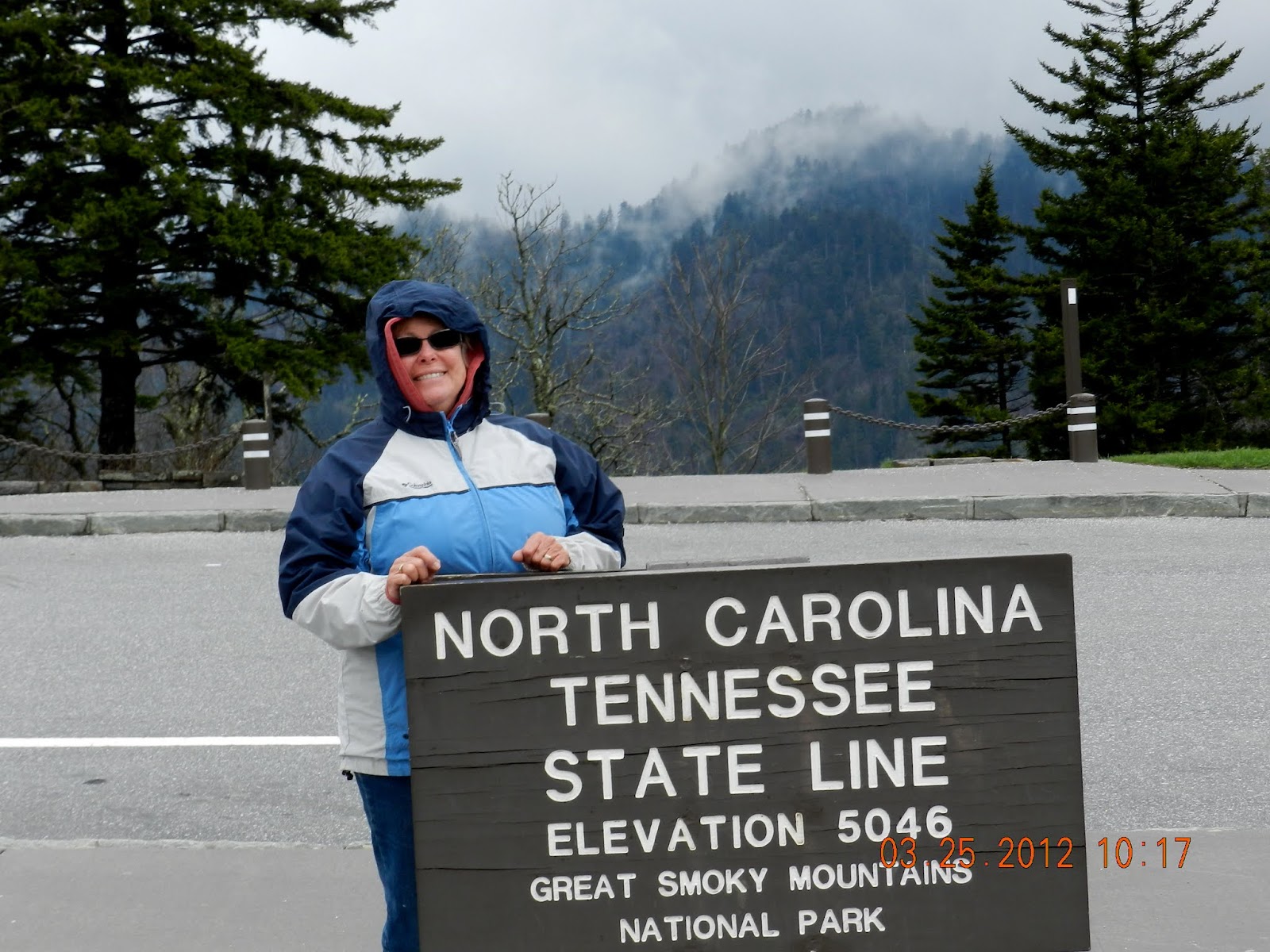 This is the view in front of me 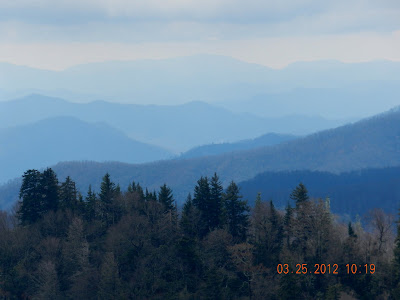 In the town of Cherokee, North Carolina they have many painted bears.
We never found out why, there must be at least 20 of them, all beautiful. 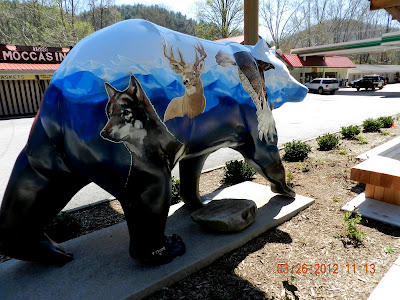 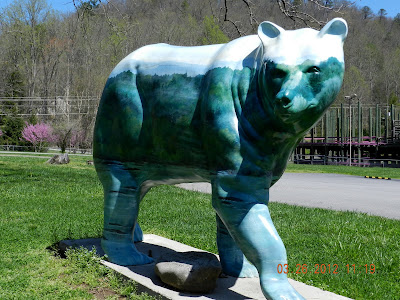 We were a little early in the year for the park and the town, most things open later on towards the last week of March or even into April.  They have many campgrounds to take advantage but most don't open until later.  Smokemount, the campground we stayed in is open all year unless they get too much snow.  Another campground that is open year round is Cades Cove, you have to enter on the Tennessee side or roads from the south.

This is a great place for camping and hiking, I would highly recommend it, there is something for everyone.  The Redbud trees are every where you turn and they are so beautiful among the other trees.
We are so blessed to be able to go to these National Parks, they all have something different to see.

That's it for now, Safe Travels to all