Top of Georgia is an Airstream Park about seven miles north of Helen, Georgia in the far upper northeast area of Georgia.  The hills/mountains are beautiful.  The little town of Helen is a tourist town made to resemble The Alps.  Like many other small towns that lost the lumber or rail industries they had to come up with a way to survive, and they have done well.  In Washington we have the small town of Levenworth, same thing.

After leaving Mays Hill Alpaca we drove on many country roads and ending up on county road 77 which took us through a small, very small little burg called Woodville where we stopped to have a bite to eat at a Bar-B-Q place called CJ's.  There were two ladies doing all the cooking, serving and cleaning.  there were about four tables inside and a couple of picnic tables outside.  Inside were pictures of their families, mostly the grand children  I am mentioning this place because this was the first time we had Bar-B-Q since we have been in the South.  I had always thought if it as greasy and very high in sugary calories.  My fears were taken away with a delicious lunch, we also had dirty rice which was a first for us also.  I would highly recommend this lunch stop everything was delicious.  Also there was a small park next to it and Buddy loved that part.  If you go, it will sneak up on you, this town  has a population of about 200. 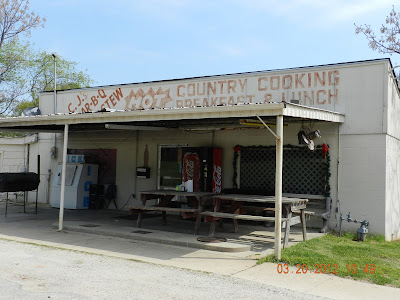 Unfortunately I am unable to locate my photos of Top of Georgia and Helen.  However, fortunately, I was able to find a couple of pictures from one of our side trips:


Boiling Peanuts, people in the south love their boiled peanuts
They taste like a warm very soft peanut and very salty
I have tried them twice, they are not for me.
This is how they boil them.
During the tourist season they will have several barrels boiling peanuts 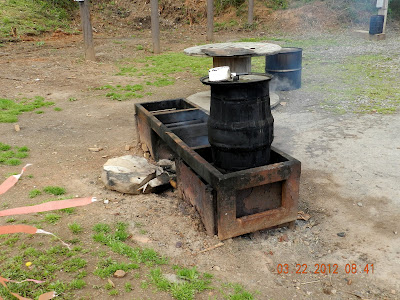 It takes lots of wood 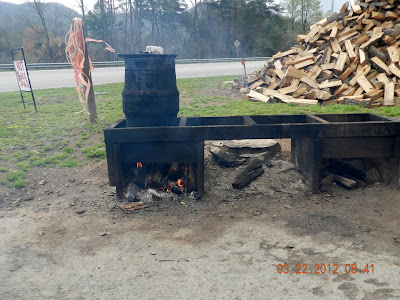 This is how you get them, just dip this old pot that has many holes in it and get your boiled peanuts
Like I said, they definitely not for me

This was also a very nice fruit stand, we bought some good 'ole Mexican tomatoes
The little twig bundles are called Yellow Root, make a tea with them, drink it and all your pains will go away.  I didn't try this, he said it was a bitter tea. 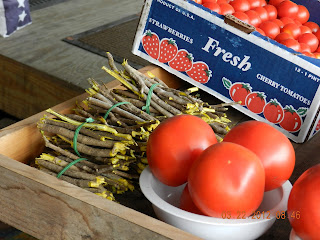 A side note on yesterday's blog I mentioned Harvest Hosts.  I had left off the " s " off of Hosts.  So if you google it be sure to spell it correctly

That's all for now.

Posted by Joe and Nancy Conrad at 6:59 PM