Sunday started off with spice pancakes (instead of Waffle Sunday) and sausage with real maple syrup.  Yumm, they were good.  Then off we went to the University of Alaska.  They have a very large campus overlooking the Fairbanks area; we visited the newly refurbished Museum of the north. 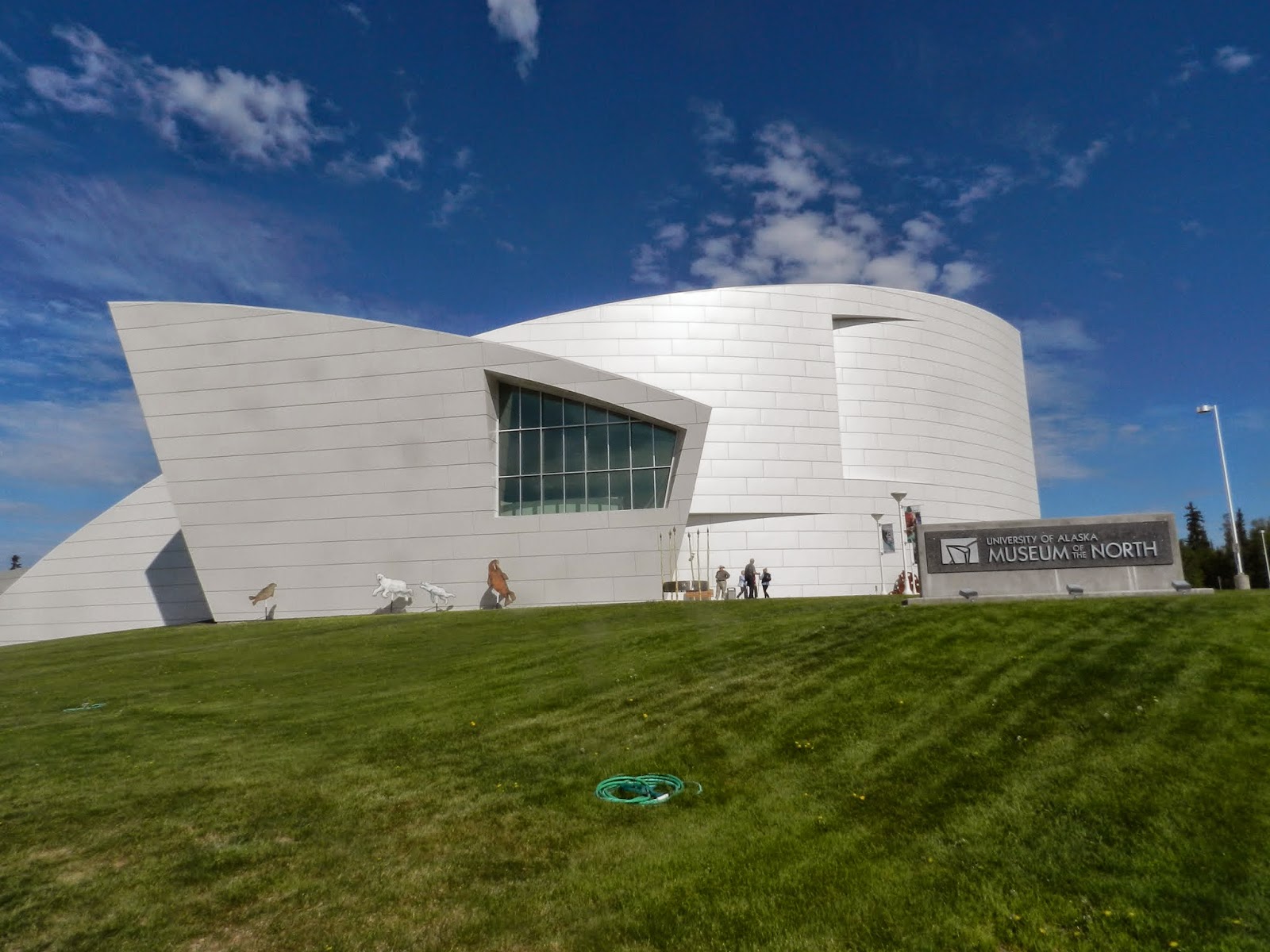 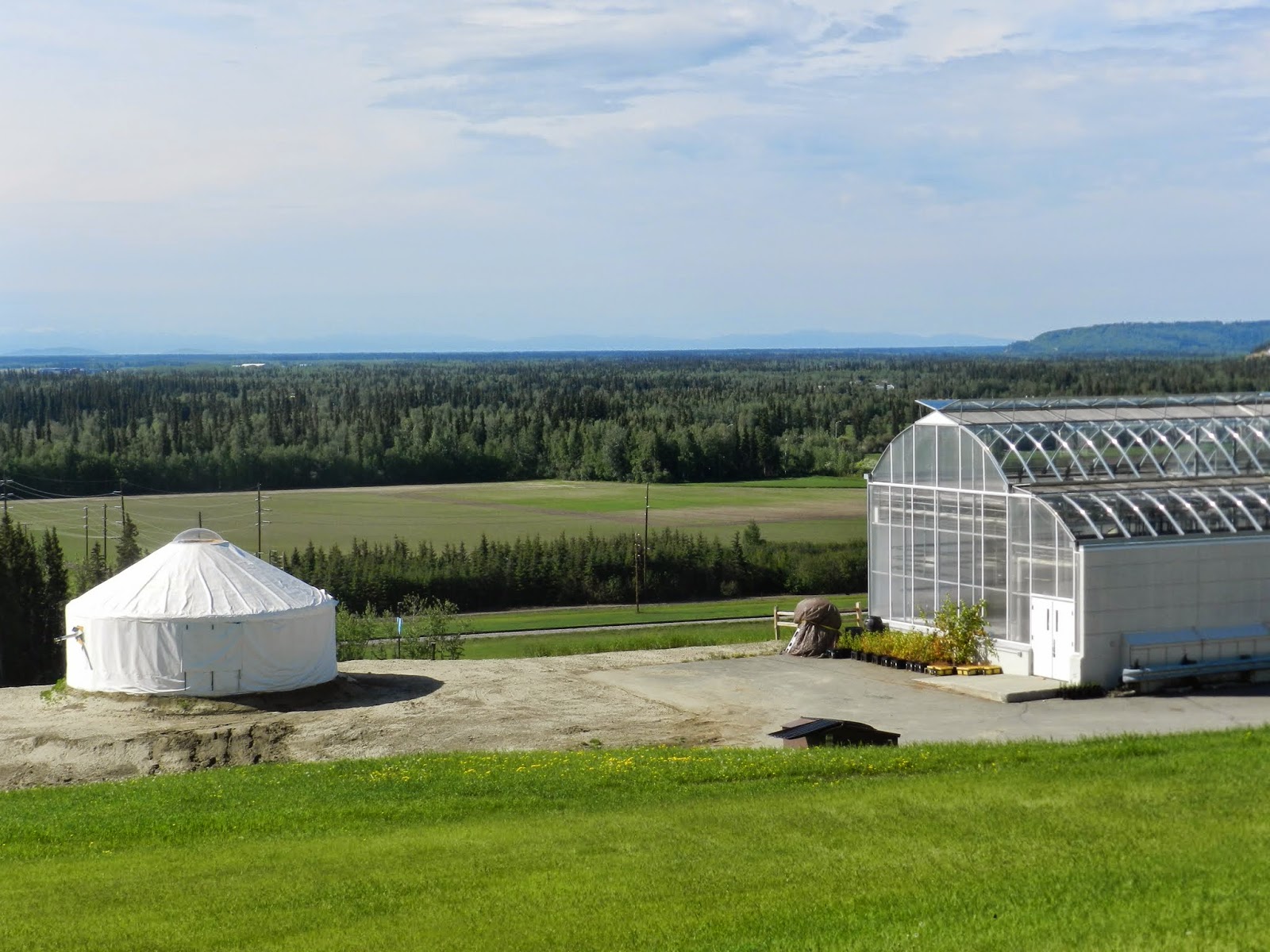 Looking the opposite way.  As you can see they have a large greenhouse, in the picture is only about 1/4 of the greenhouse. 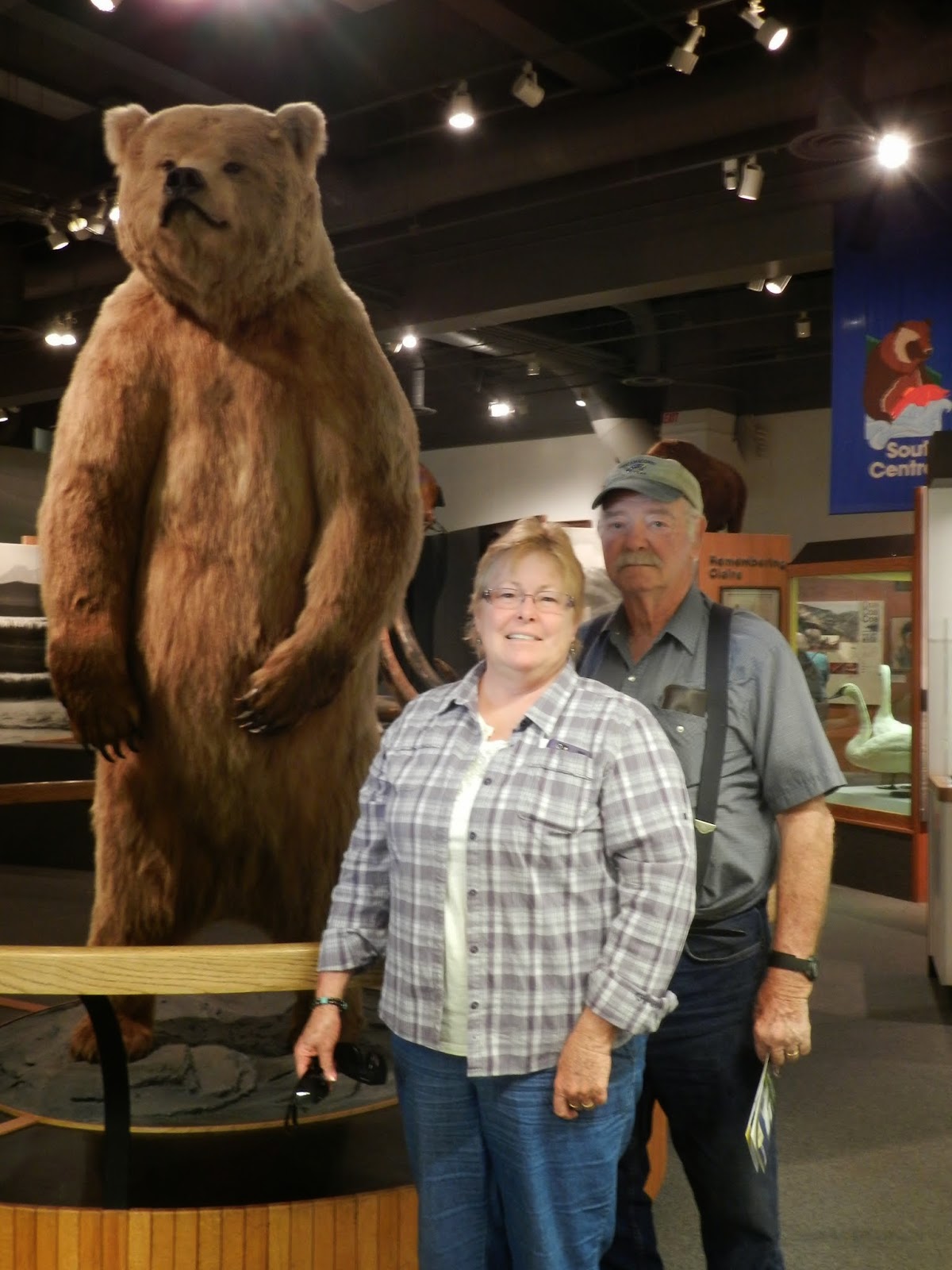 Boy isn't he a cutie, just look at the smile (the bear). 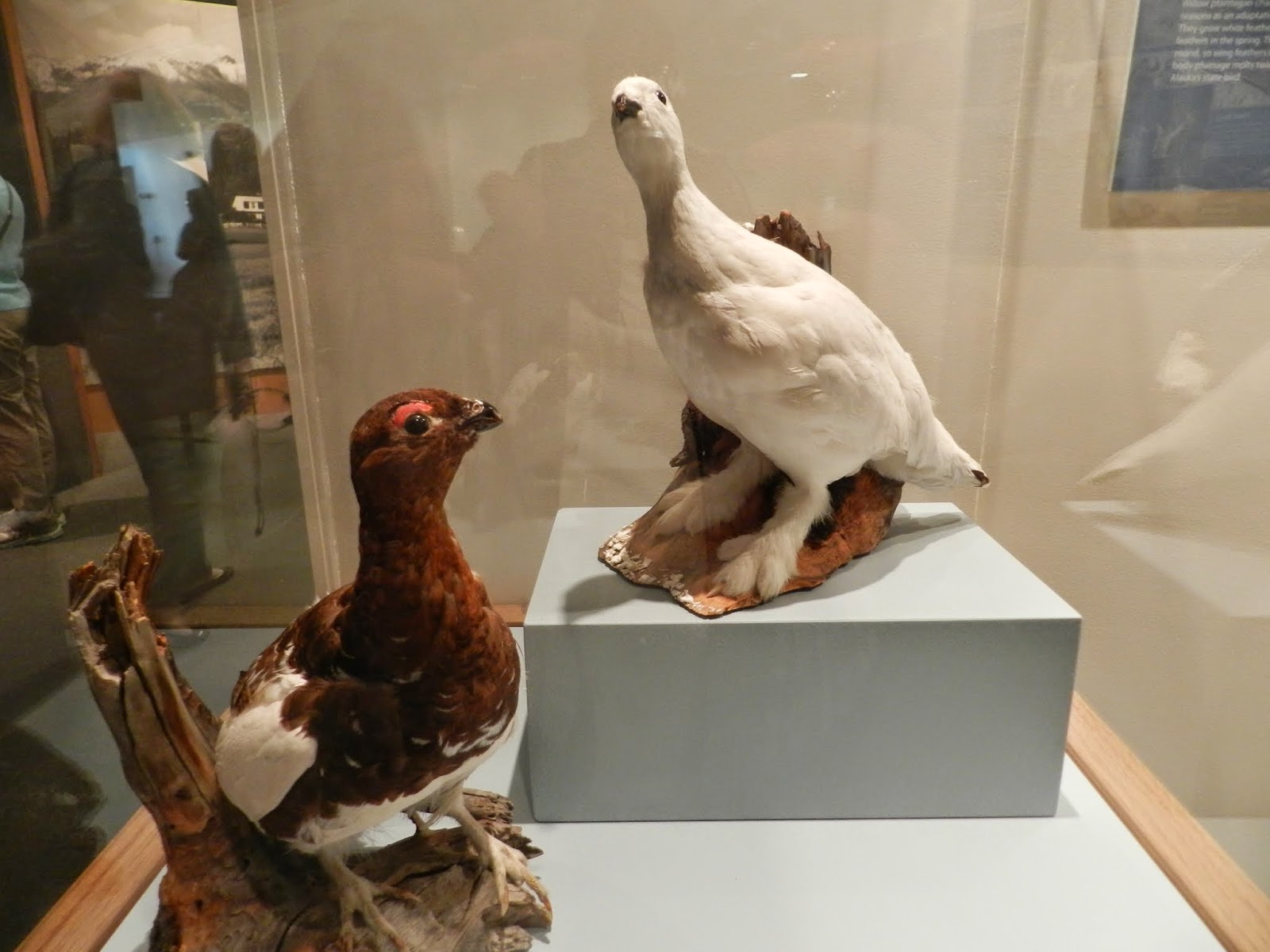 The Ptarmigan, white in the winter and brown and white in summer.  This is what the town of Chicken wanted to be named after but they couldn't agree on how to spell Ptarmigan so that is why they called the town Chicken. 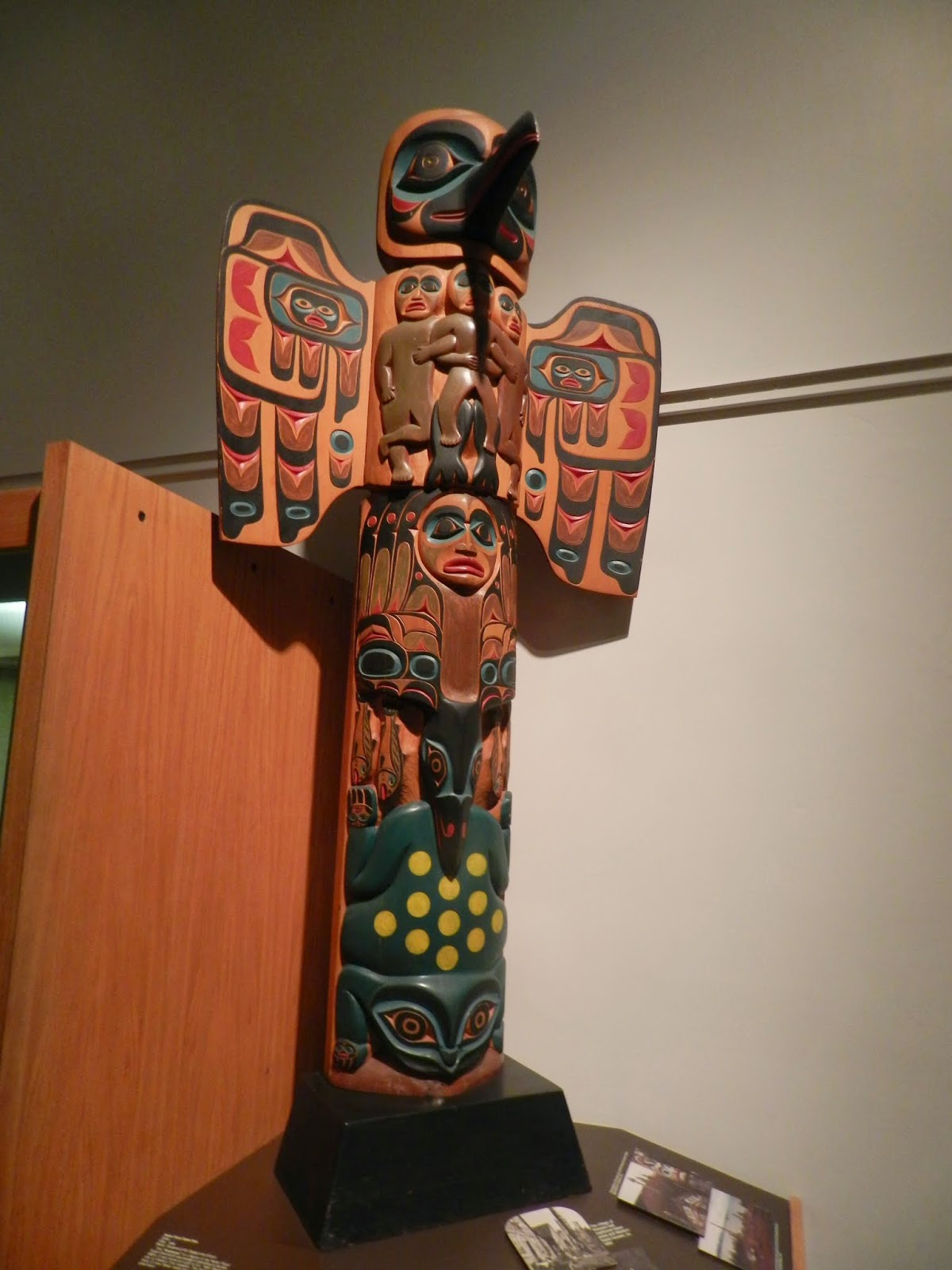 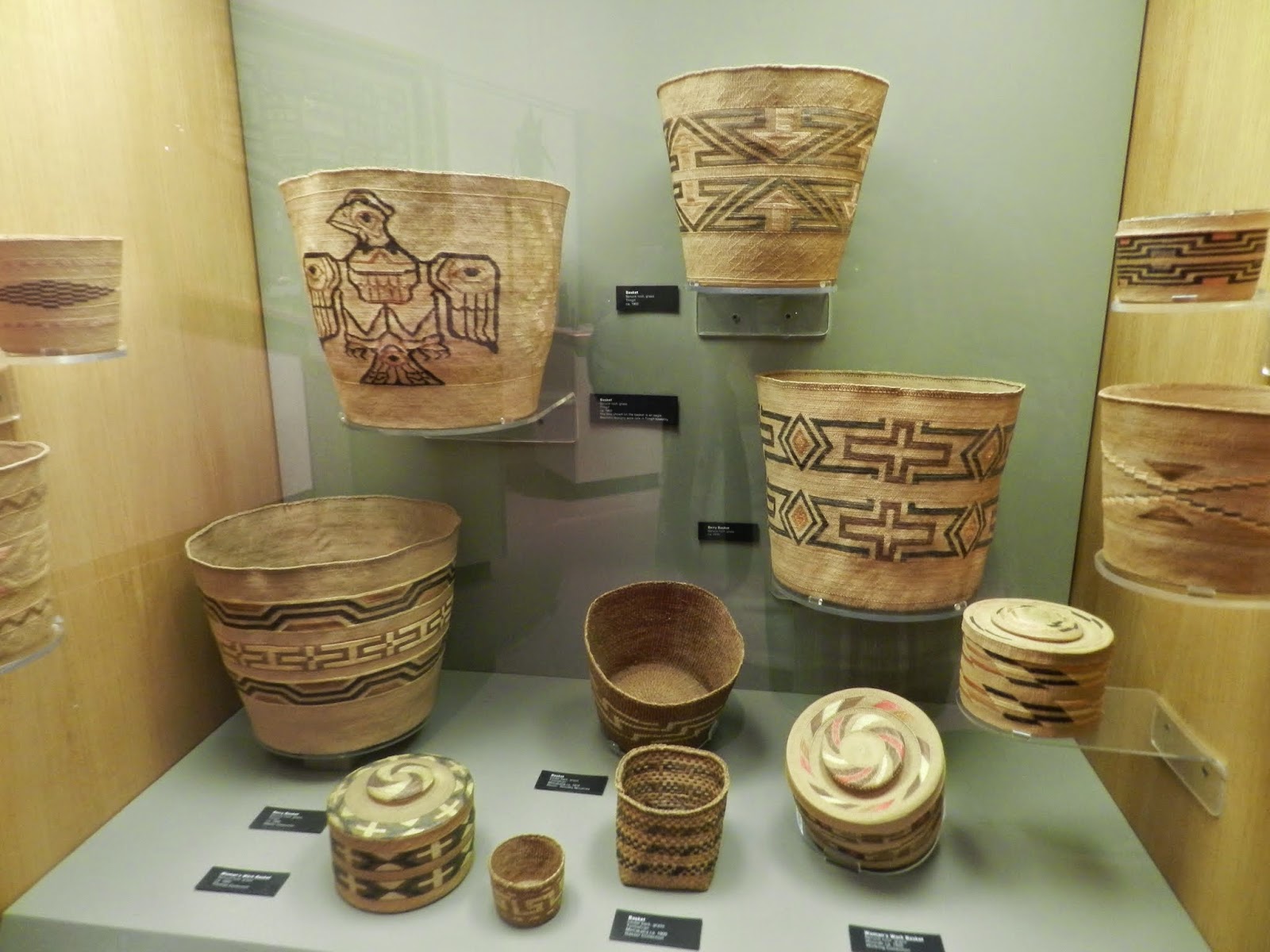 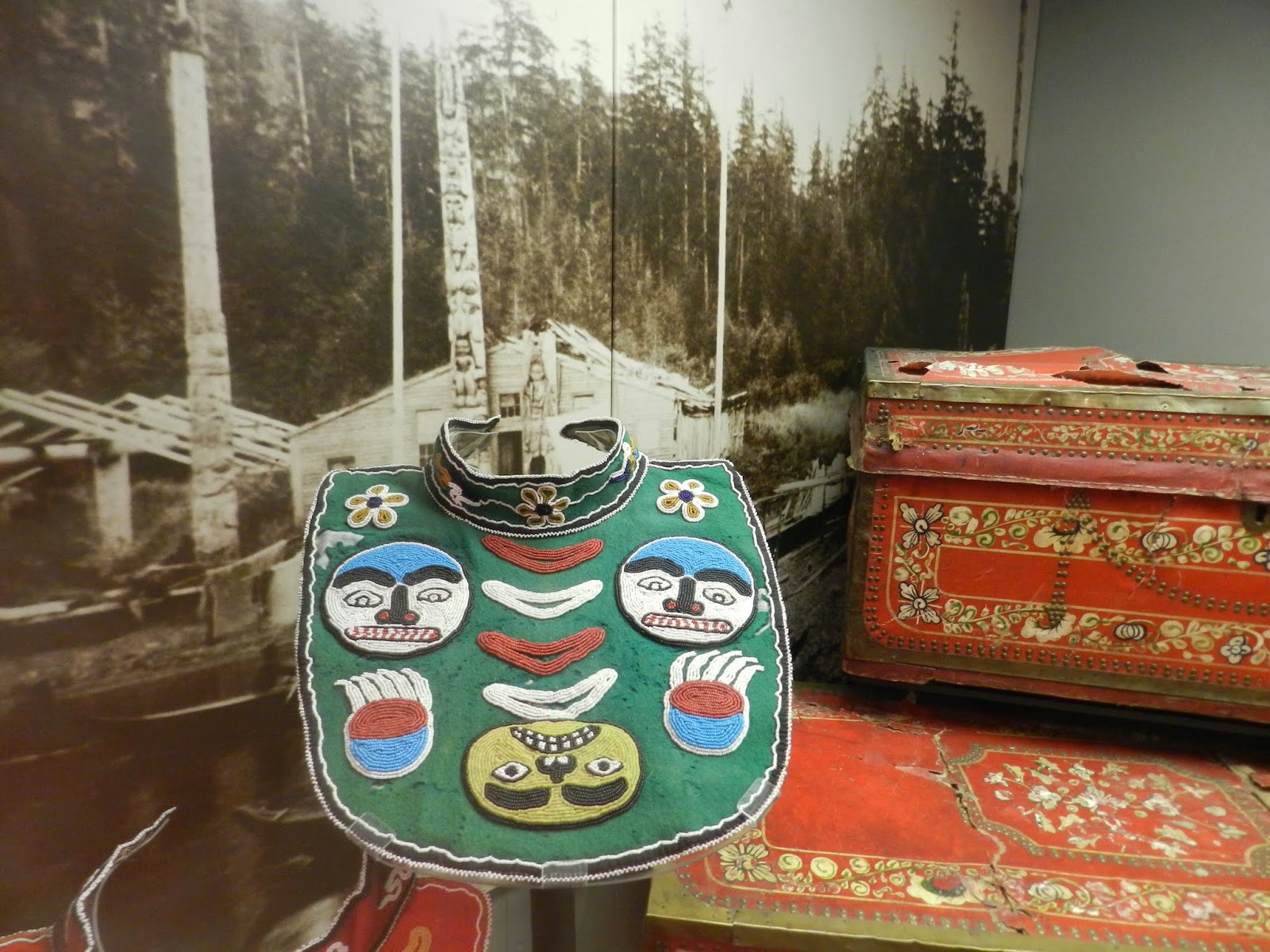 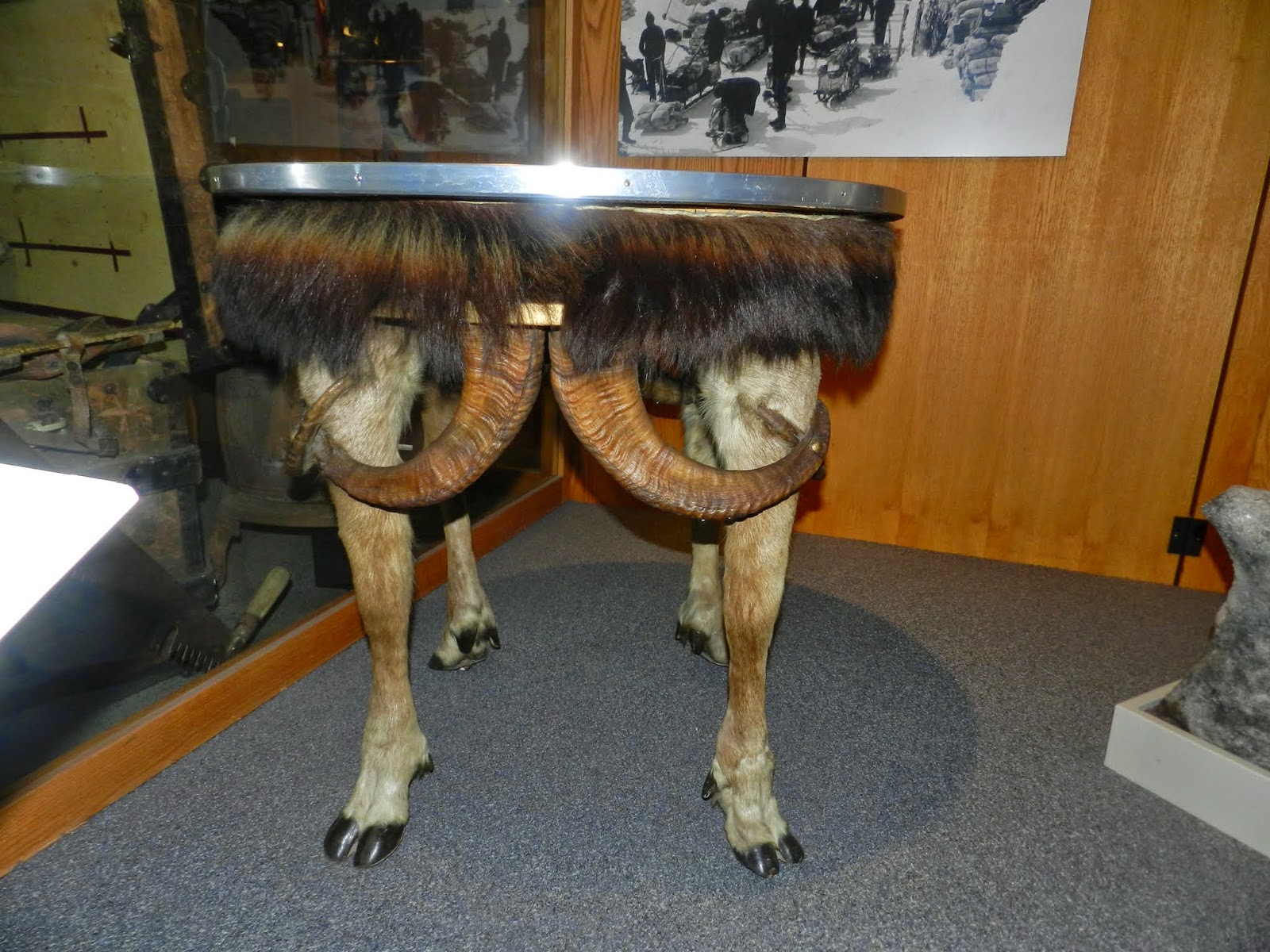 This is a table with Elk leggs, Mountain sheep horns and Muskox skirting.  It's kind of eerie to me.
There were several skeletal remains of pre-historic animals.  One, they named Blue Babe who died about 36,000 years ago.  This was just an interesting chart to show how Blue Babe's age was determined 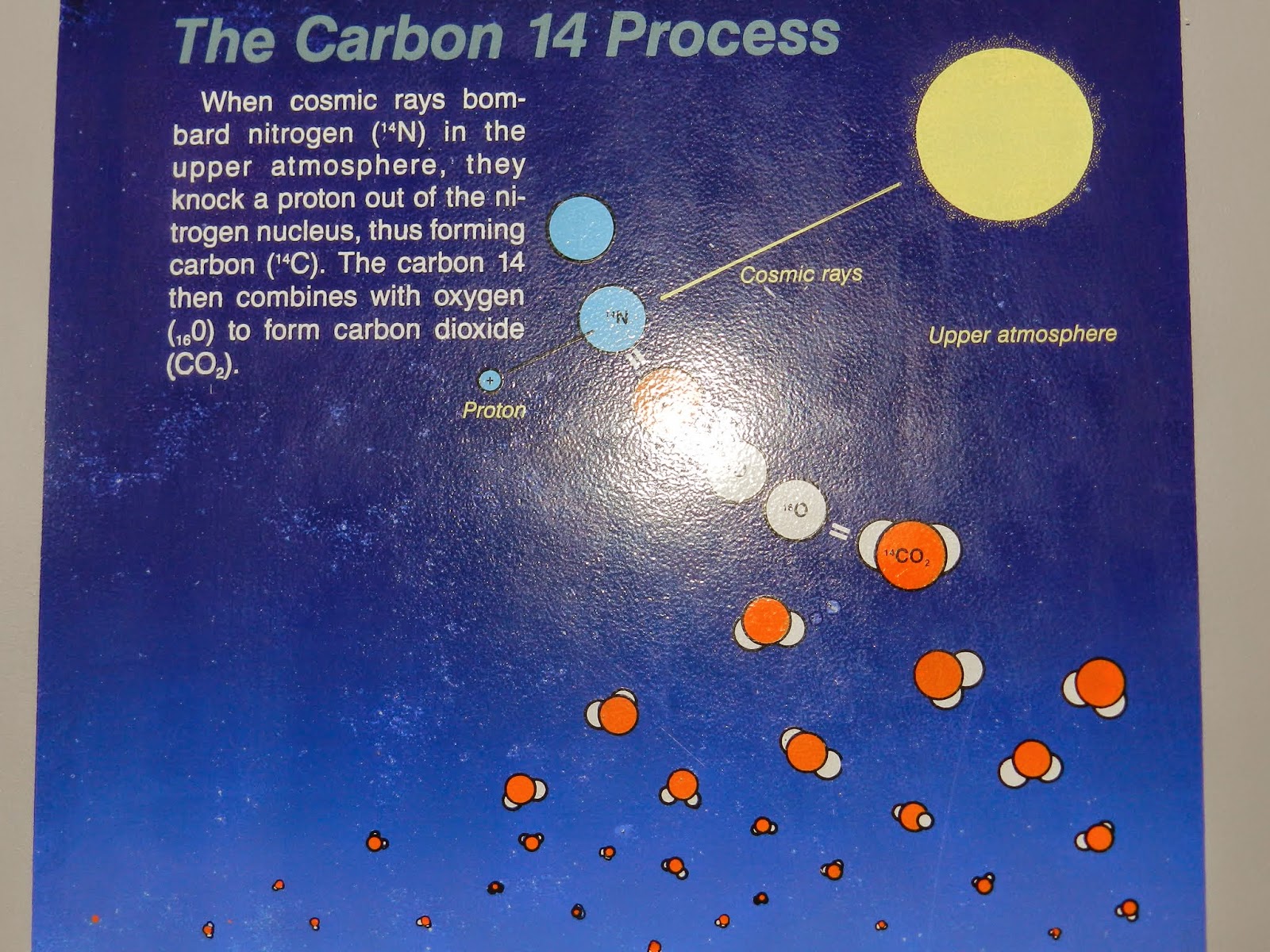 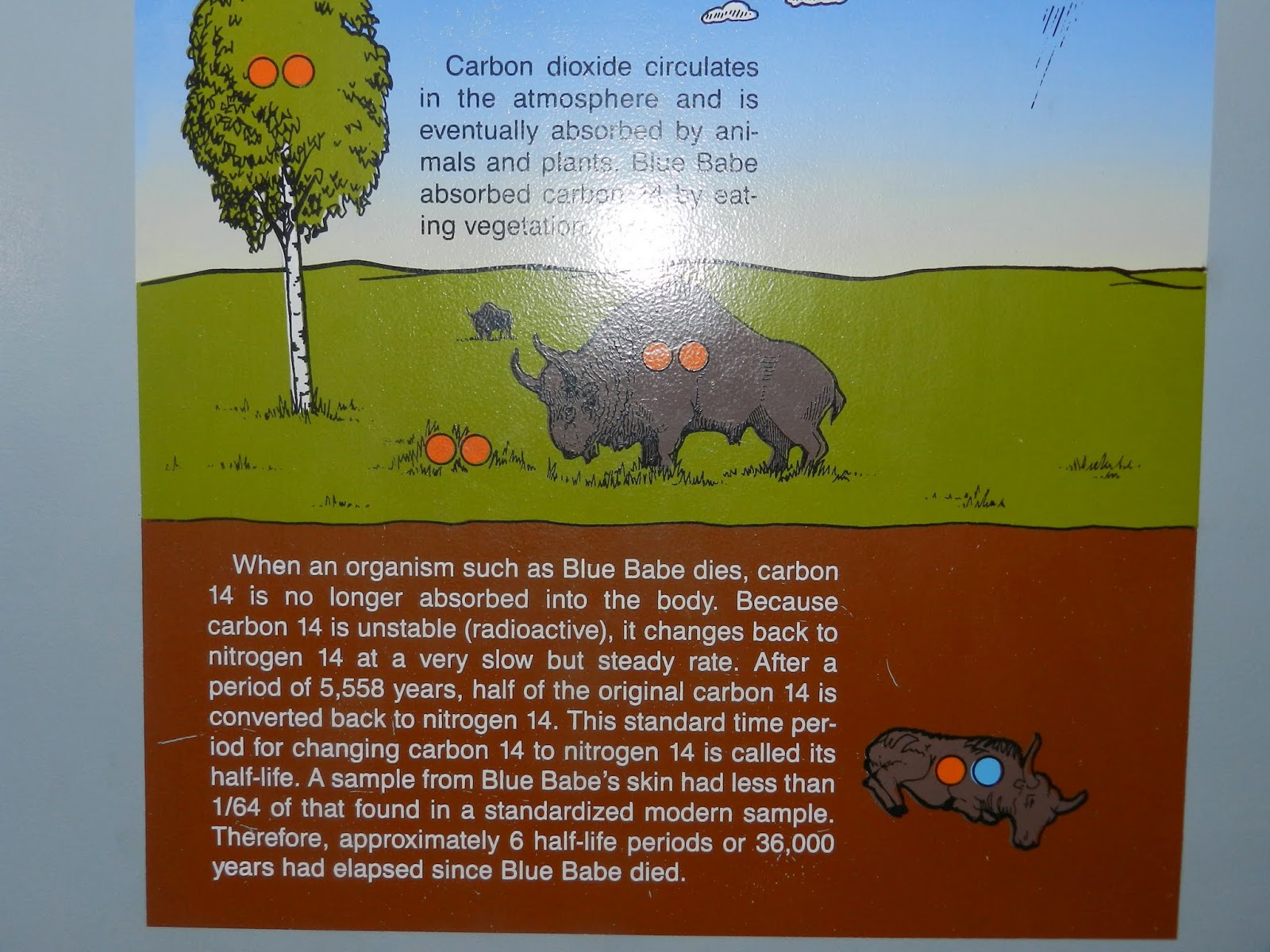 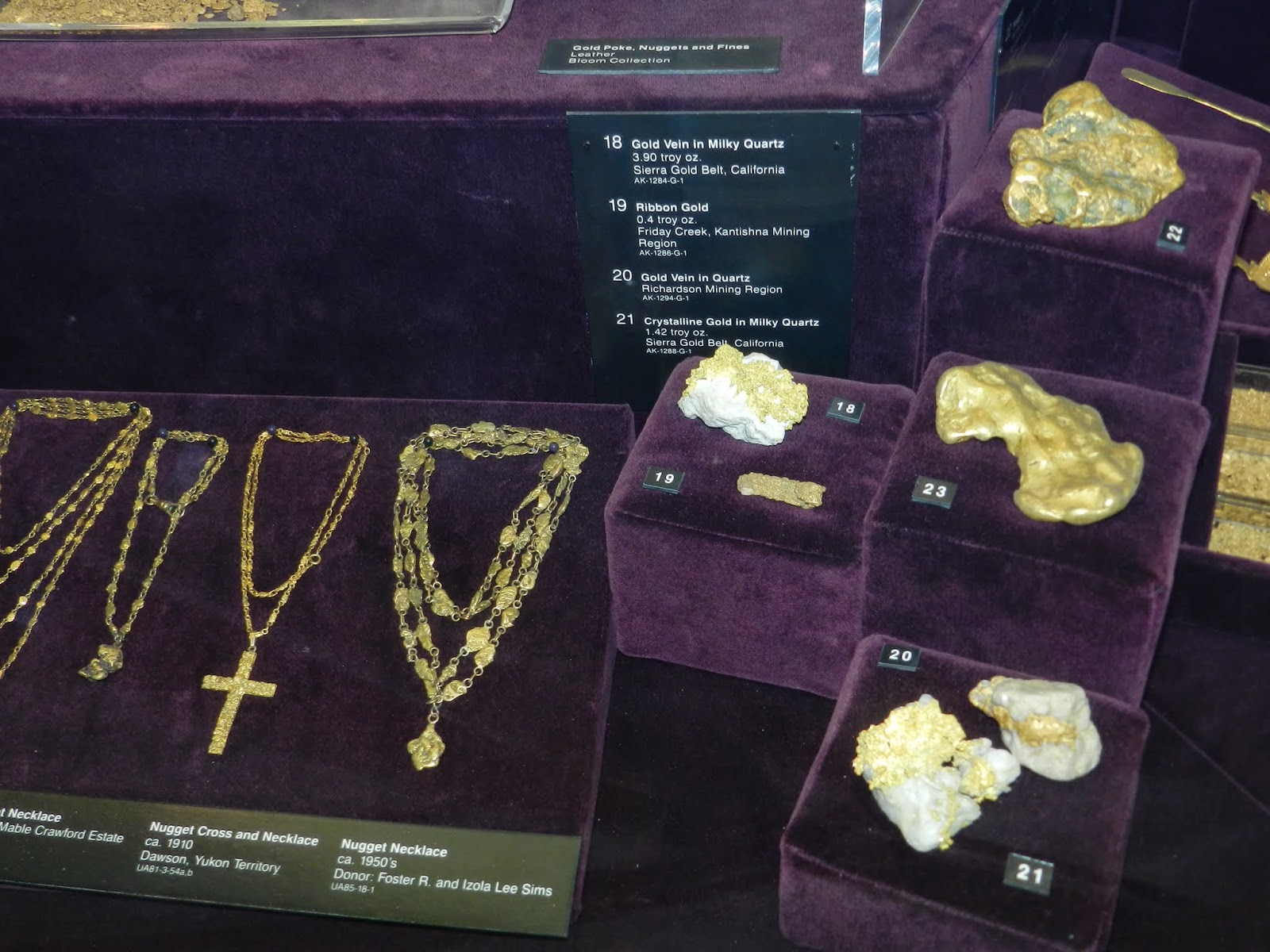 Look at the size of these gold nuggets. 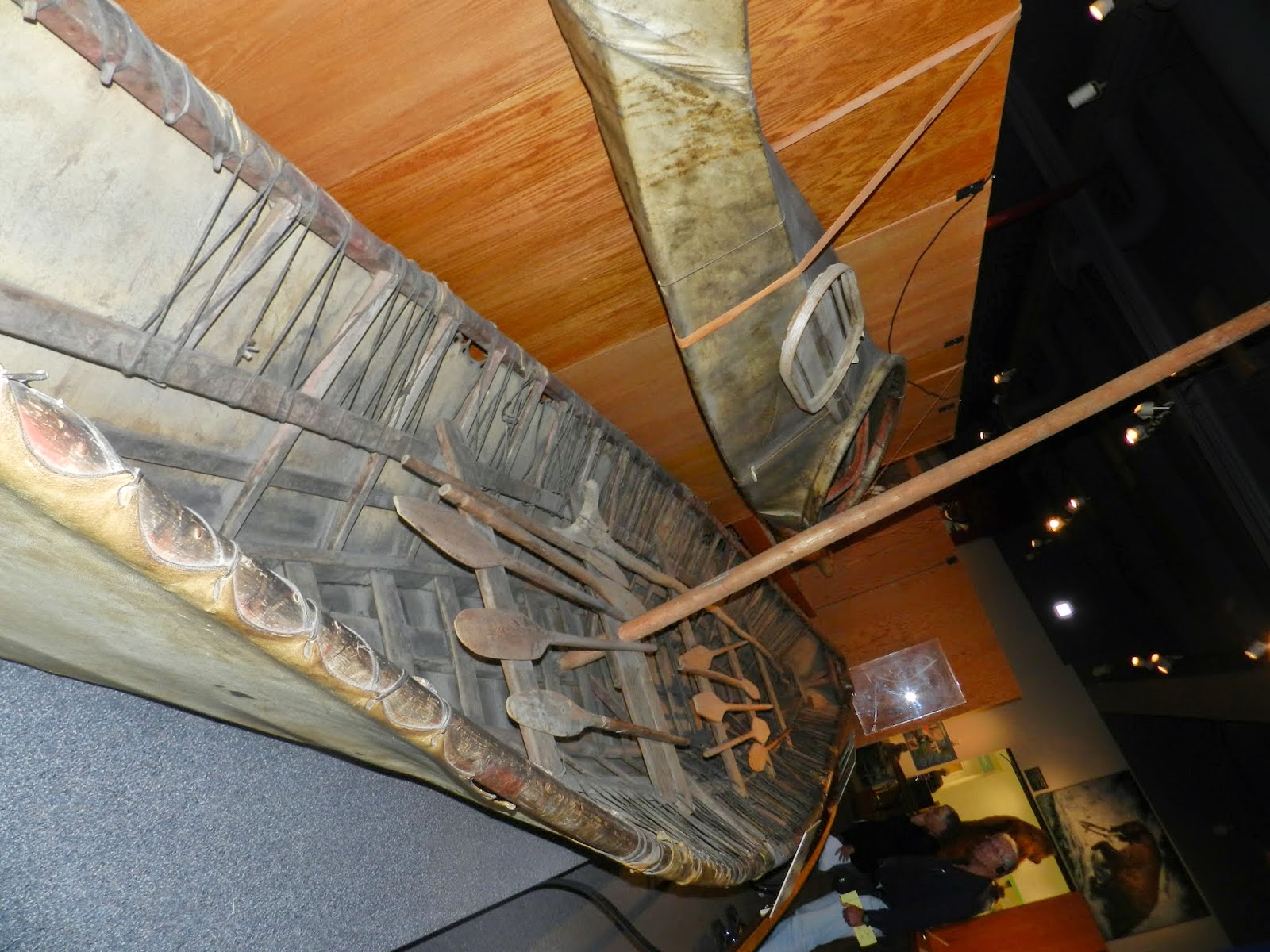 Made of Beaver and Moose skin.  It also had a pole for a sail. 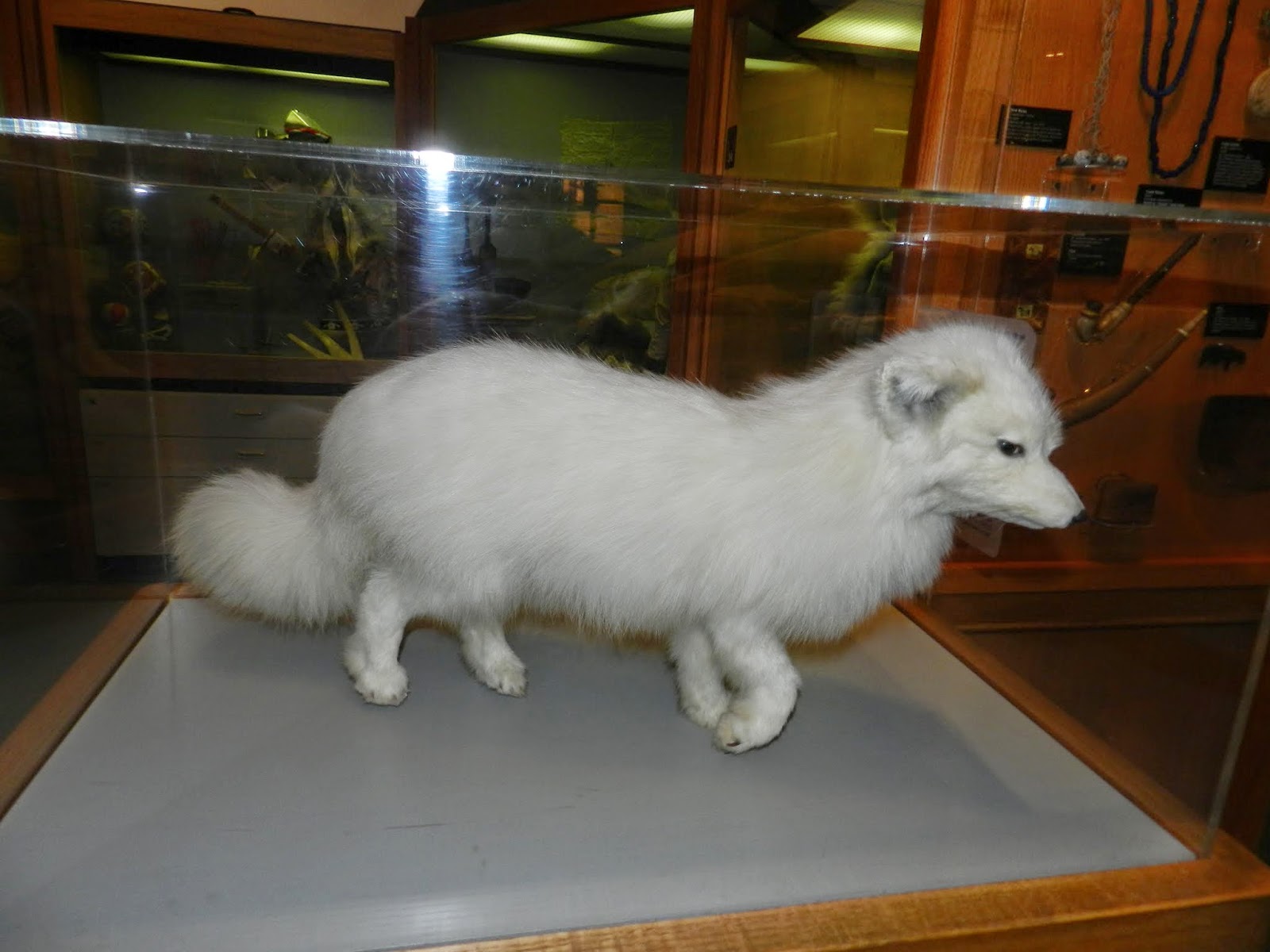 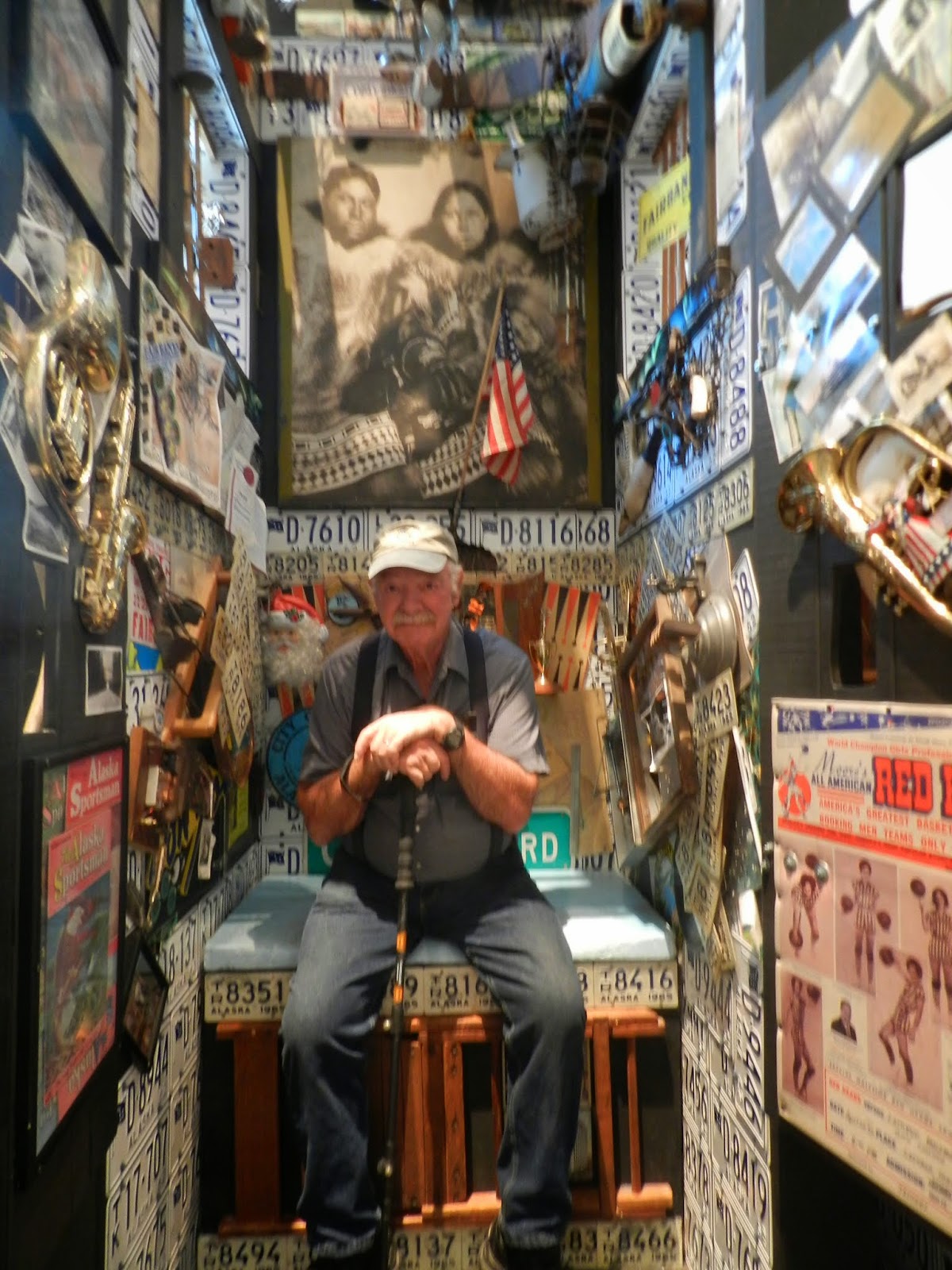 In the Art Room was this "out house"

Later in the day we had dinner at The Alaska Salmon Bake.  All you could eat, grilled salmon over an open pit, prime rib and cod, along with crispy fresh salad & veggies and beans.  We skipped the beans and went for the salads and Salmon.  The salmon was obviously fresh right out of the Copper River.  You could not ask for any better salmon. 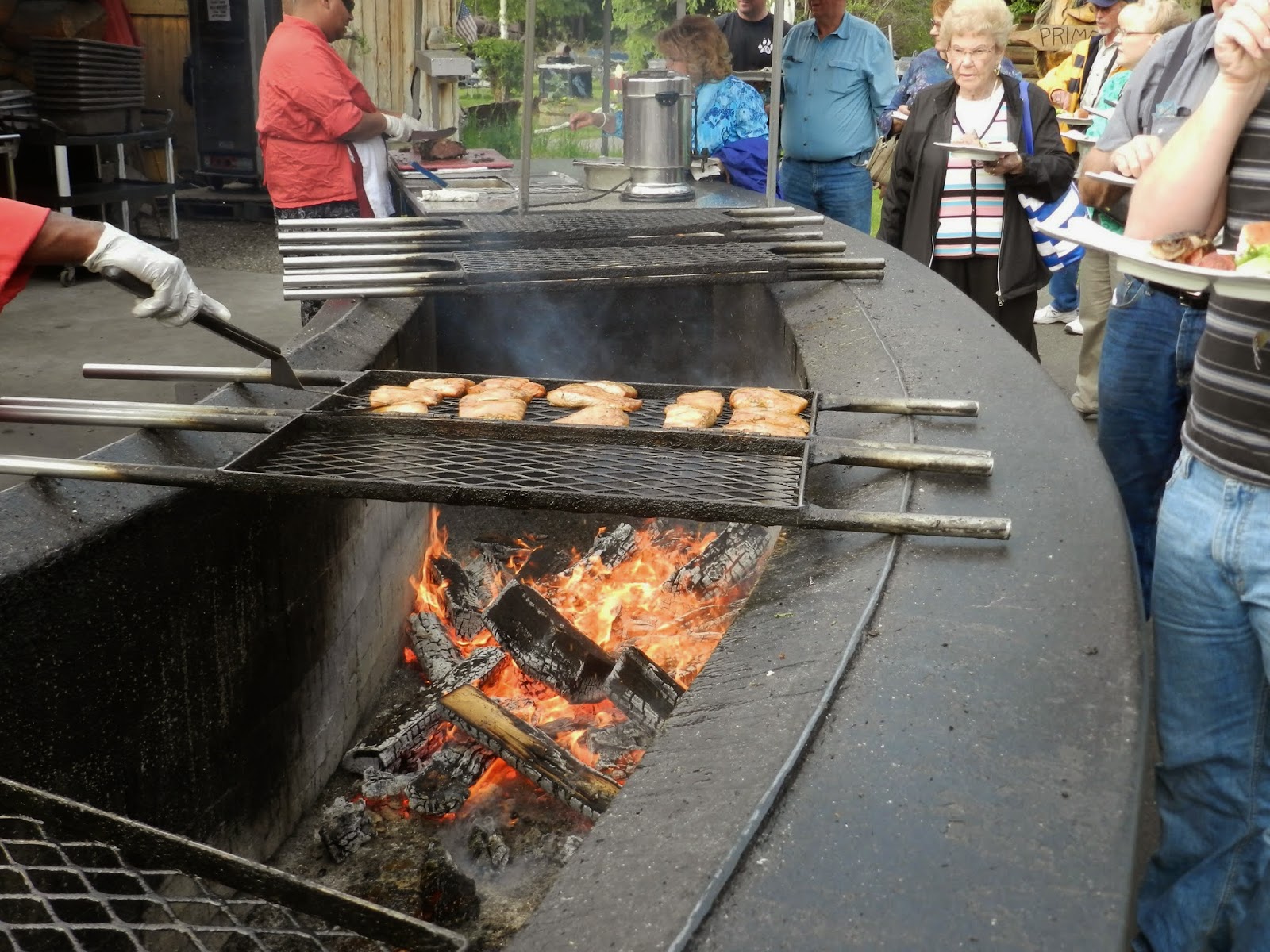 They just kept cooking the salmon on these grates, very similar to the ones we have at home for the Potlatch. 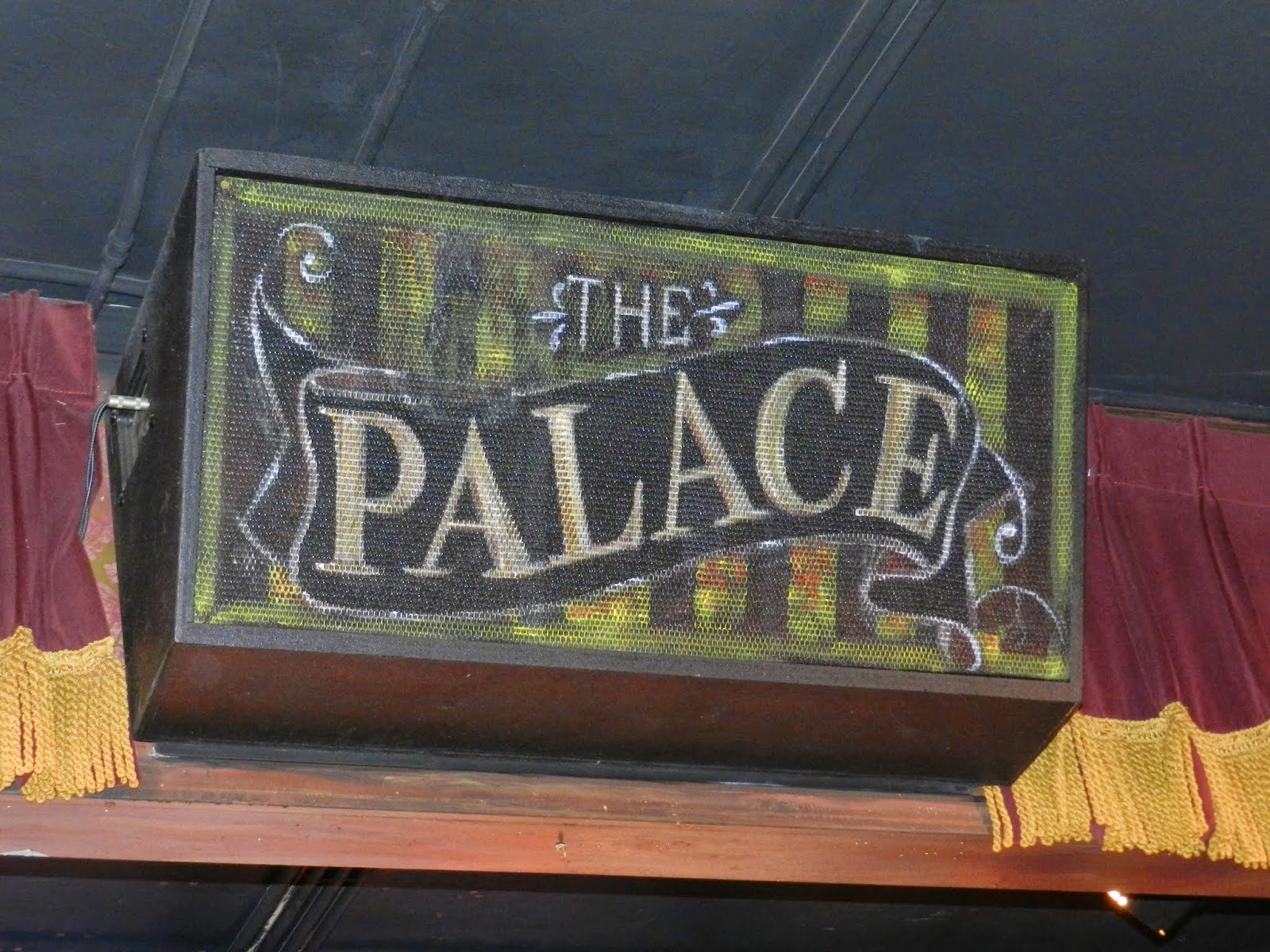 After dinner was a show at The Palace Theatre.

Funny as hell, had us laughing the entire time, they must have changed costumes 30 times during the show. 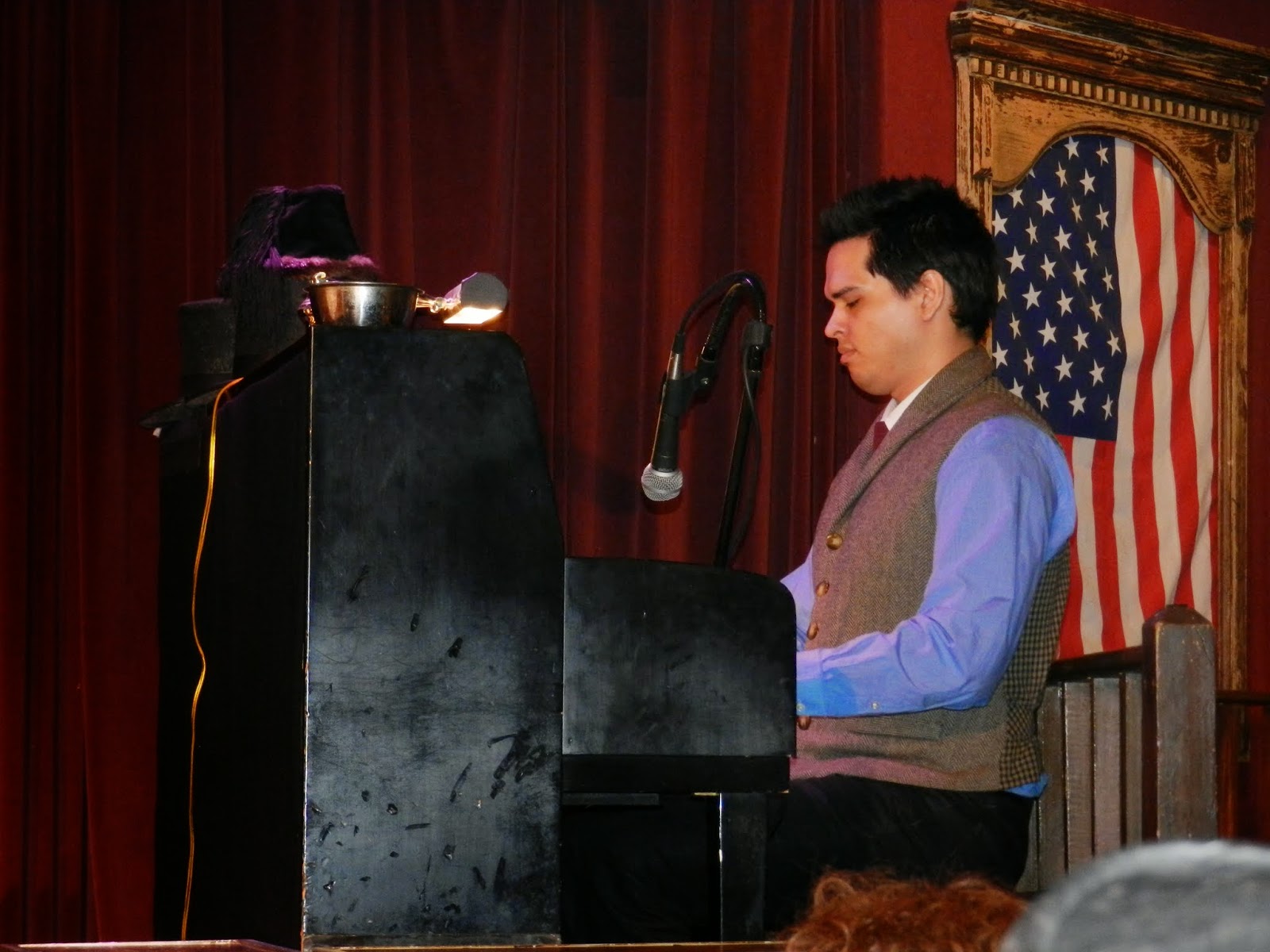 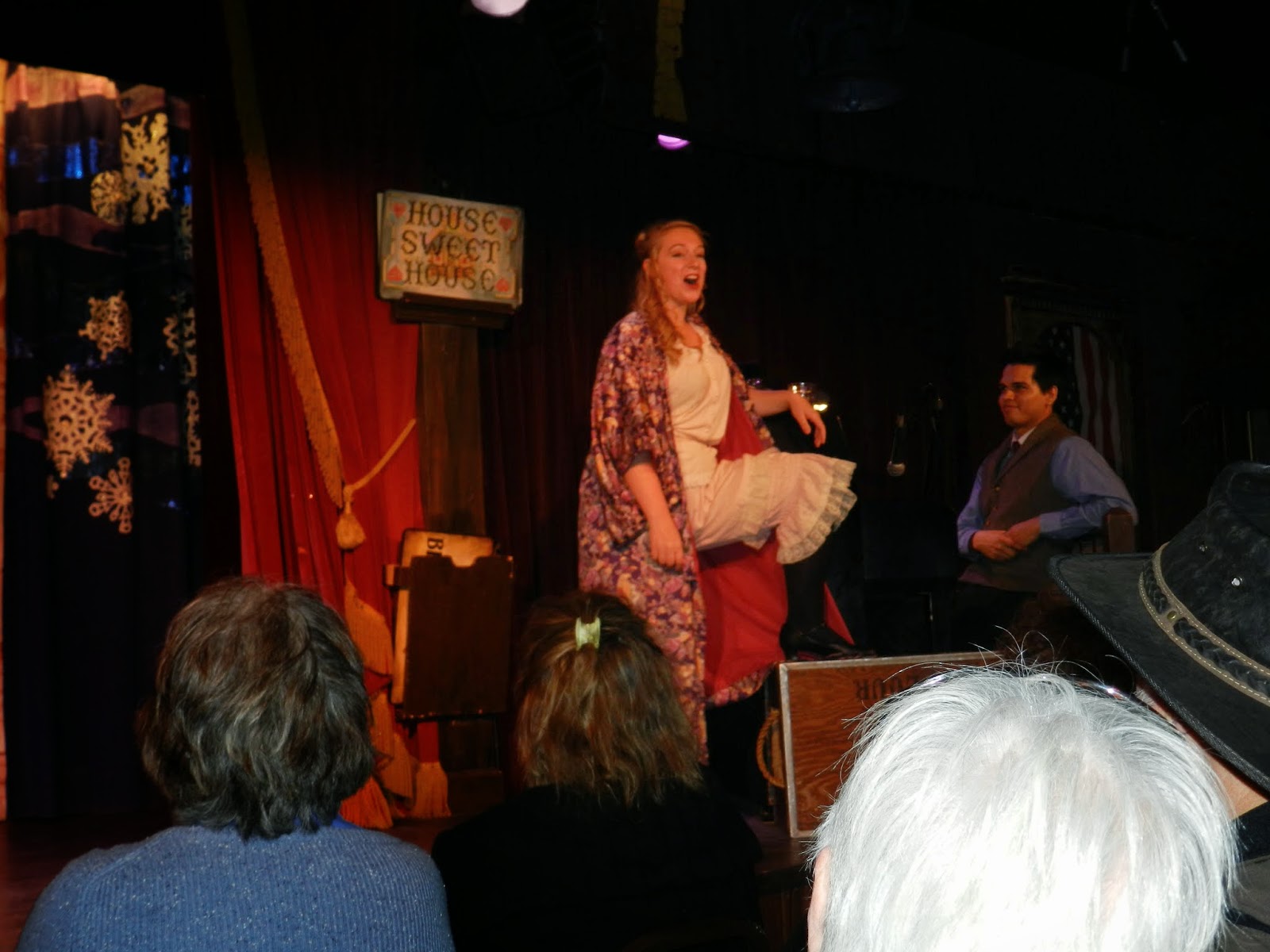 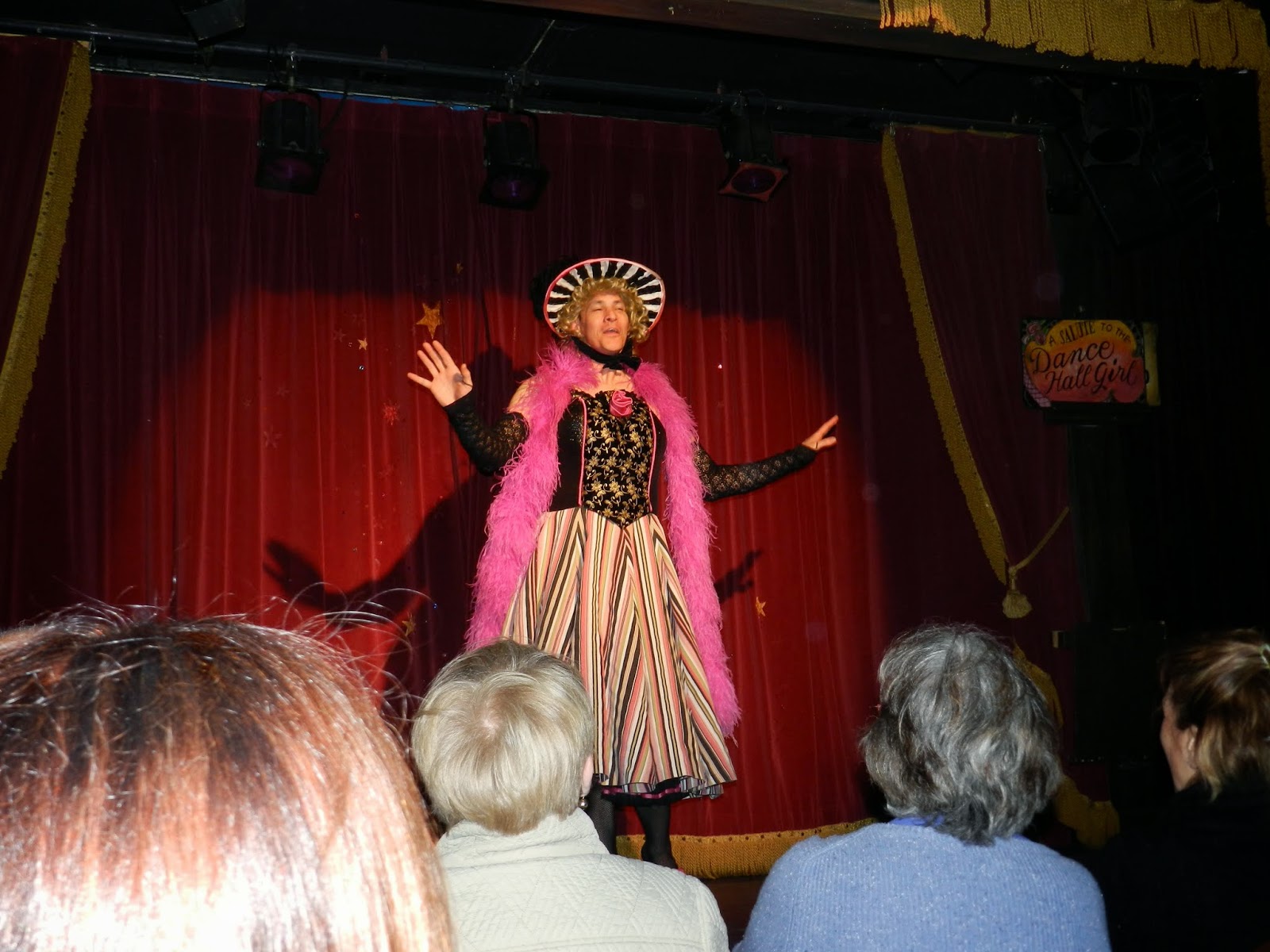 This is one of the men in the show 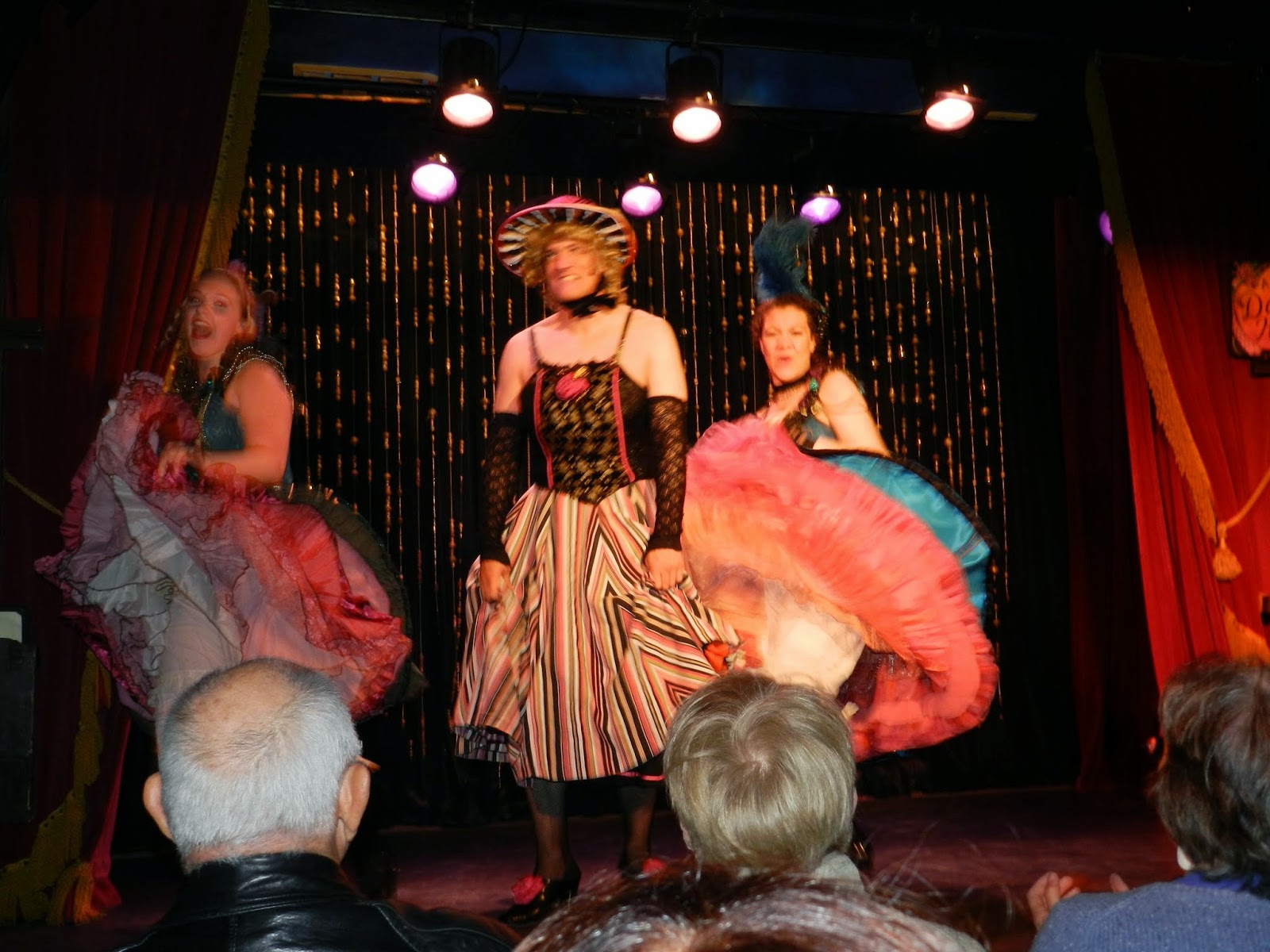 For those of you coming this way I would highly recommend this show.  The theater is at the Pioneer Village, about a 10 min walk from the Salmon Dinner. 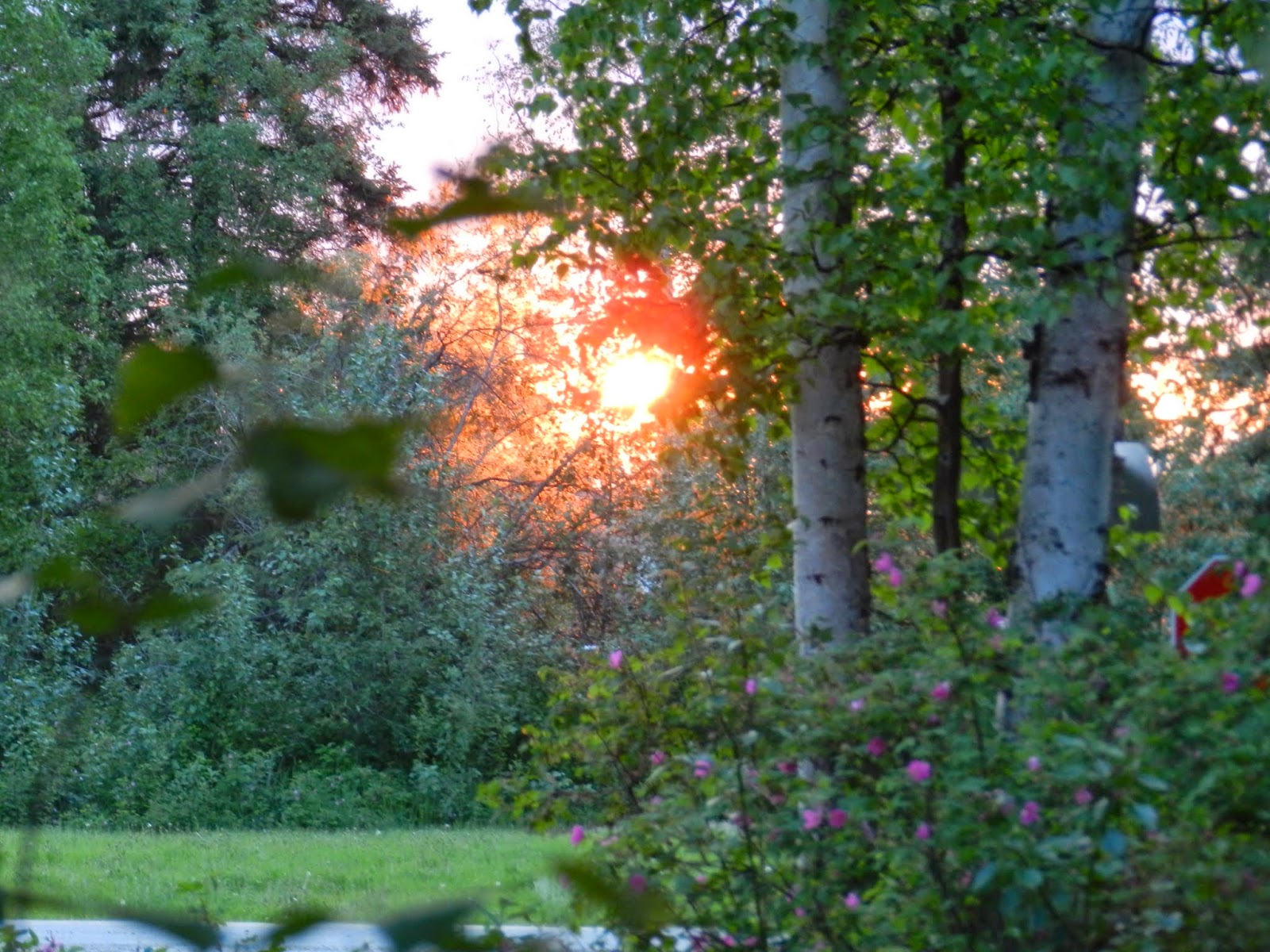 
That's it for this day, thanks for stopping by.

Nancy
Posted by Joe and Nancy Conrad at 7:28 PM

Email ThisBlogThis!Share to TwitterShare to FacebookShare to Pinterest
Labels: Alaska, Fairbanks U of A Salmon Play