Leisurely  leaving "The Slabs" as we only have about 80 miles to go to Joshua Tree we continue on the east side of the Salton Sea.  By the way, The slabs where a nice place to stay, and something to experience once, plenty of room and we felt completely safe. Along the way was flat farming but the road was a roller coaster.  In Mecca we took Box Canyon Rd that heads northeast to I-10 and the south entrance to Joshua Tree National Park A truly beautiful drive that I would highly recommend to anyone in the area.  The road actually goes up a canyon that is a wash, as in flood plain when it rains.  There are many smaller canyons to hike up off of the main canyon.  We did not take any of those hikes as we were unaware of them and only learned about them later.  A few pictures taken with a regular point and shoot type of camera so it doesn't show as many of the spectacular colors and depth.

Looking at the map a little closer I noticed that just 5 miles east on I-10 is General Patton's Memorial Museum. We had never been there so with trailer in tow off we went.  We had completely forgotten that it was Veterans Day.  They were having a big ceremony, along with BBQ hamburgers, hot dogs and a chili cook off; the place was packed with people, cars and even a tour bus.  We went up a little dirt road and pulled up along side of a couple of Army tanks behind the building and parked.  We even put our flag up so we looked official.  The tour or the memorial museum was very good displaying items of history from WWI to Iraq. 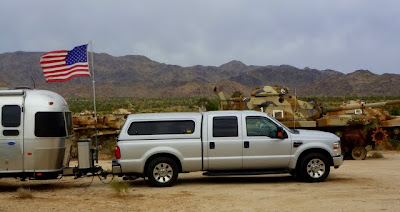 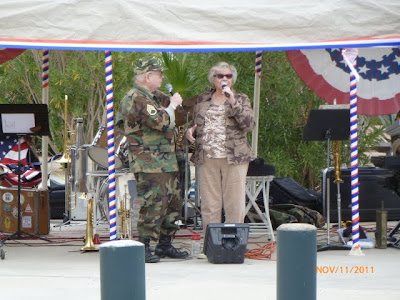 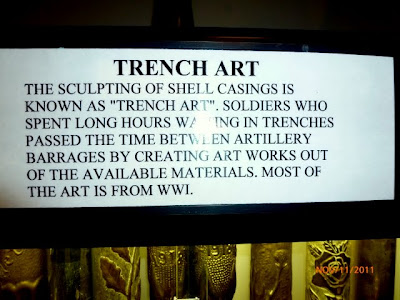 The shell casings where beautiful 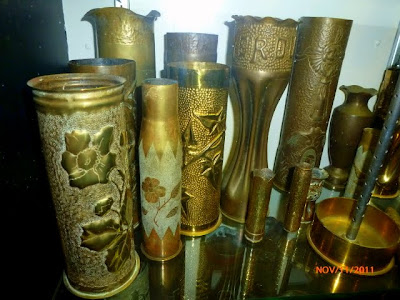 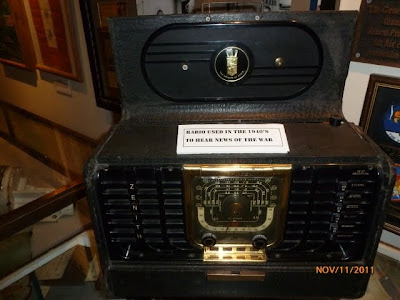 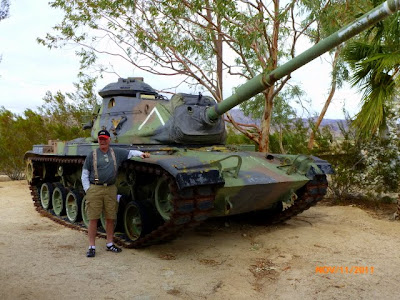 This was a frame that they would put on top of a Jeep in WWII and then cover it with canvas so it would look like a tank.  I guess it worked 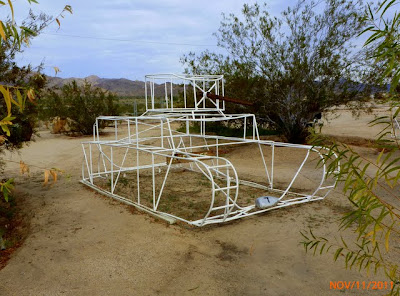 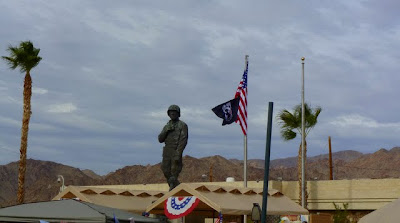 After a few hours, we were on to Joshua National Park, just a few miles up the road.  When we got there we found out that the campground that we wanted to stay at was closed.  It had heavy damage from flash floods a few months ago and it had not been cleaned up yet.  The other campgrounds where full because of Veteran's Day Holiday weekend.  So we turned around and went just outside the boundary which was BLM land and found a nice place to boondock along with several others.

The road looked good, but there had been quads running around and the place that there was a flash flood became very loose sand and we didn't make it through.  Luckily there were other really nice people that gave us a hand at getting unstuck.  We actually had to unhook, pull our truck out and then another truck with 4x4 pulled our trailer out.  A couple of years ago when we got our truck..............We don't need a 4x4.  We were thinking snow, not sand.

Finally all settled in 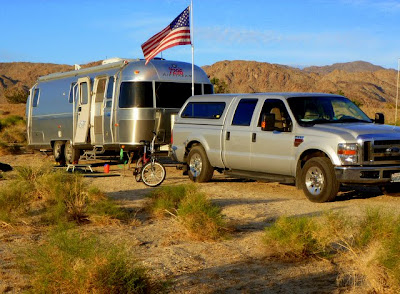 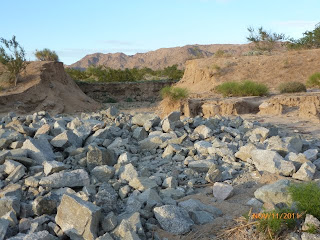 middle of wash out 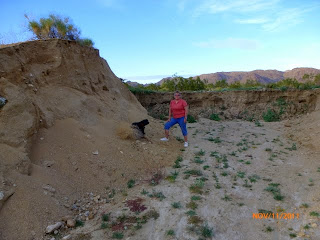 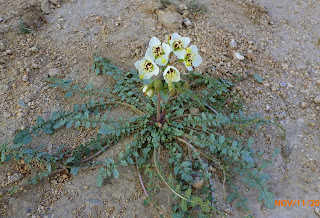 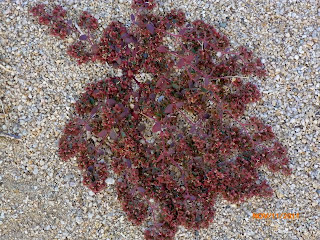 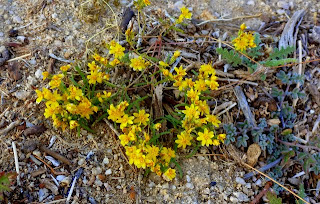 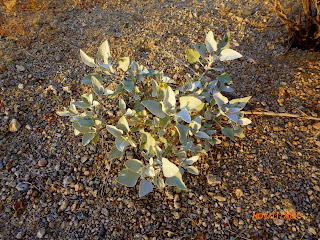 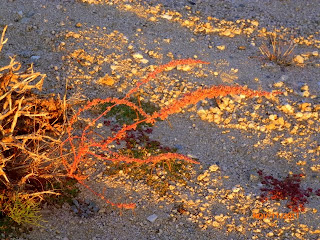 End of a beautiful day 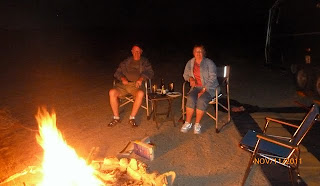 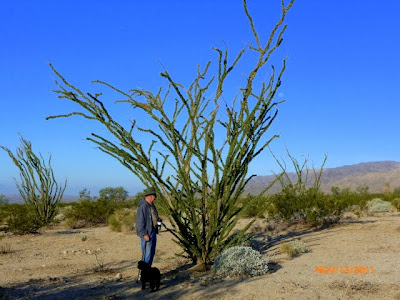 Close up of ocotillo branch

Up close of the flower about to open up 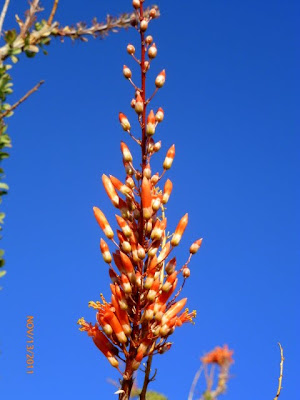 Look real close this is a perfect ant hill with shadow behind it
No ants at this one, it's probably too early and too cold 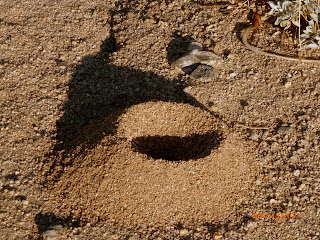 My shadow next to my coffee cup and walking stick 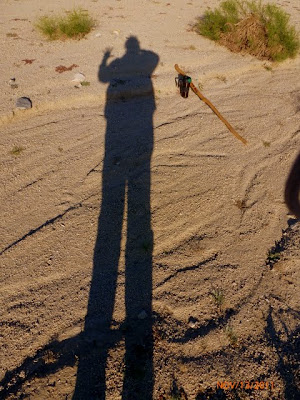 Breakfast after our morning walk 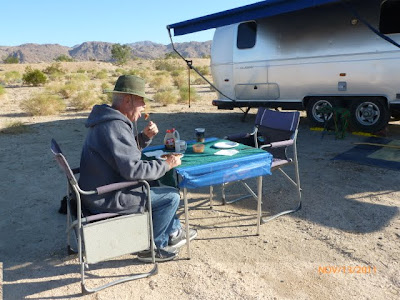 We always have waffles on Sunday 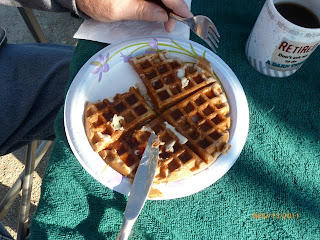 Tomorrow we are moving into Joshua Tree National Park.

Posted by Joe and Nancy Conrad at 9:08 PM