The first days in Mountain Home were kinda wet and windy, but Saturday 10/8 we woke up to a beautiful cloudless blue sky, a great day for traveling.  We fueled up in Mountain Home at the Pilot, intersections I-84 and Hwy 20 for $3.99/gal diesel.  I forgot to mention that we also filled up at Love's in Troutdale OR on I-84 and paid $3.55/gal.  We filled up in the truck section which at this station it is cheaper than the car section. (I only mention this just in case anyone wants a good deal and happens to be in the area)

On our way north on Hwy 20, nice drive but a little bare, however you could see on the far mountain tops a dusting of snow.  Hwy 20 has many pullouts for historical markers.  Apparently this was a stage coach route.  One place was Rattlesnake Station, another was Toll Road.  Below is along the hwy 20 toward Ketchum.

(not able to load the picture)

We are parked in a huge parking lot that is used for RVs at the River Run Lodge just outside of Ketchum & Sun Valley. It got down to 35' last night.  RV's are coming in here from all over the States and Canada, mostly the people that volunteer.  Joe and I are volunteer drivers.  We will be driving to Boise to pick up jazz festival bands.  We lucked out and we are both working the same day, Wed. and then we will work again on next Sunday to start returning the bands to the airport.  That will be the extend of our commitment, the rest of the time is ours to listen to as many bands as we can.

Today, Sunday is the annual event of Trailing of the Sheep through the middle of Ketchum.  The sheep are being brought down from the mountains and herded right through town, about 1,500 of them. They will then be trucked down to Southern California to fatten up for either the butcher or lambing season.  The start of the "parade" had bag pipers and dancers, several of the sheep camp chuck wagons (I'm not sure of the proper name of these chuck wagons), and then the sheep.  Last in the parade were three street cleaner/sweepers. 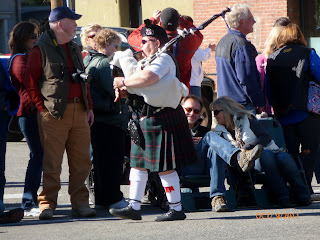 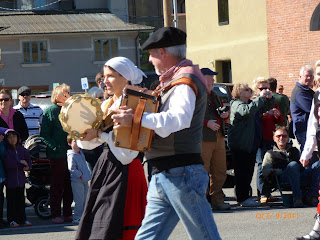 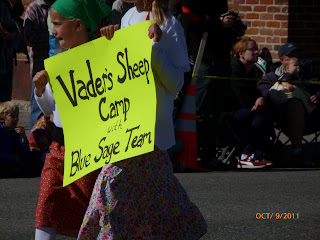 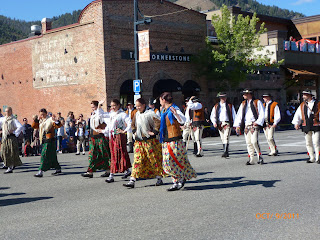 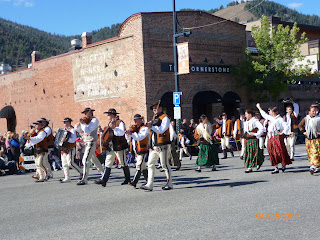 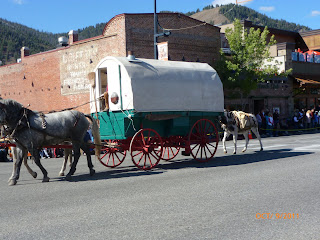 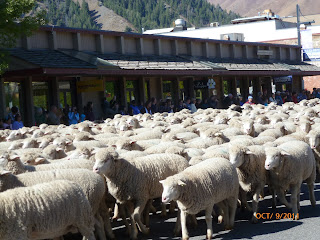 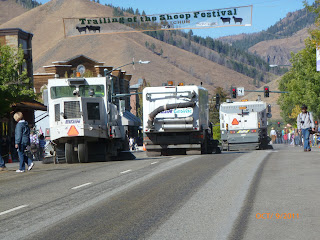 (Yea! I actually got all these pictures copies)
Several of the sheep broke through the heard at the front and those dogs were after them in a flash to bring them back.  The whole family and other ranchers helped bring the sheep through the town.  These sheep had been out roaming the hills all summer and now they were faced with being herded through streets lined with people.


At the River Run Lodge looking up the hill, you can barely make out the chair lift on the right, Joe and I road that lift to the top during the summer about 10 years ago.  It was his first time on a chair lift, he enjoyed it thoroughly, especially the lunch at the top.

This is what we see from our RV parking lot.

Joe with buddy waiting for me

Bridge across the river going to the Lodge

Here we are in the parking lot looking at the same ski run.  This is dry camping only and starting Tuesday we are able to use the Bathrooms and Shower Rooms at the Lodge.

Nancy
Posted by Joe and Nancy Conrad at 2:39 PM