October 8 - 17, 2011
We came for the Trailing of the Sheep and then Stayed for the Sun Valley Jazz Jamboree.  This is sort of a long post, but mostly pictures of all the bands we saw.  We had a fabulous time and would highly recommend putting this on your bucket list.
As I mentioned before Joe and I were volunteers for driving.  On Wed we drove to Boise airport to pick up band members  This was approximately a six hour round trip, Joe picked up Louis Ford & His New Orleans Jazz Flairs.  I picked up people that were in three different bands.  Sunday I took back the Louis Ford and Joe took six people from several different bands.  For the volunteering we were given back the money we paid for our parking and the admission tickets.  When we drove to the airport on Wednesday we missed the catered luncheon that was given to honor all the volunteers, however we were each given a $20.00 gift certificate to a very nice Mexican Restaurant.  They were very generous to the volunteers.
Tuesday 10/11/11 was a free community concert, this was Sherri Colby's Racket Makers & Friends.
The Jazz Festival started on Wed 10/12 but we were driving so we started the adventure on the next day with                        The High Sierra 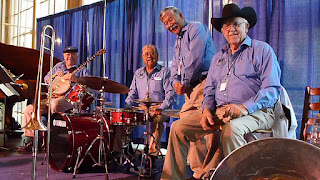 Clarinet Clambake with Joe Midri on the far right 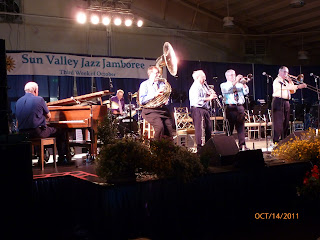 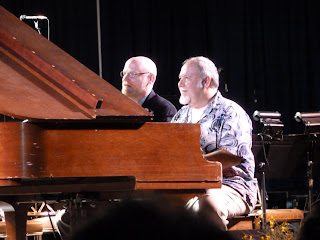 And, John in the background, Jeff and Tom on the piano and
Yve Evans singing 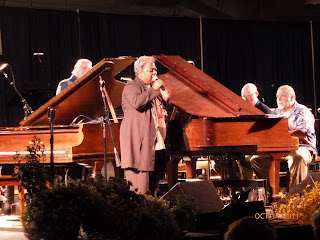 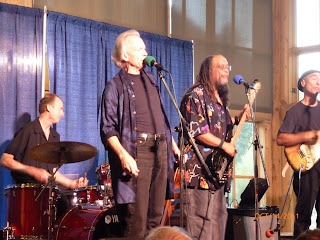 The next several pictures are of  The Whiffenpoofs.  This is a Capella  (I'm not sure of the spelling)
They all attend Yale University.  This was a real privilege to see this group.
The Whiffenpoofs have been performing since 1909 and they are wearing the same formal attire as they did when they first started in 1909
Here they are singing in Greek as they enter the stage. 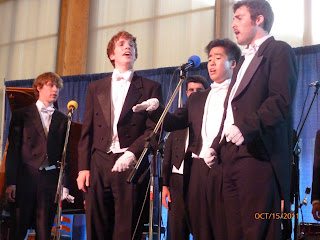 Sunday, return to the airport, this is the Louis Ford group 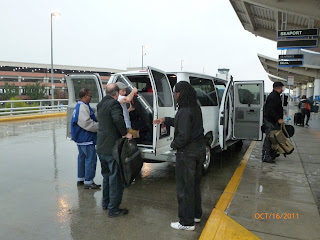 Believe it or not, they all fit in the van along with their luggage and instruments 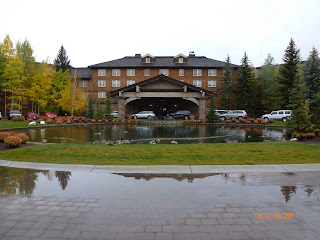 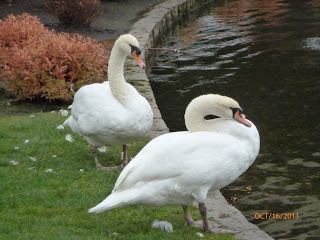 Well that's it for the bands.  we only saw about 1/10 of them. I have always liked Jazz but now I have fallen  in love with Jazz.  This was our first jazz festival and we hope to go back in a couple of years.
The entire valley of Ketchum and Sun Valley has miles and miles of bike riding and hiking trails.  It seemed like everyone walked or rode they bike everywhere.  They even have a small street sweeper that cleans the paved portions. 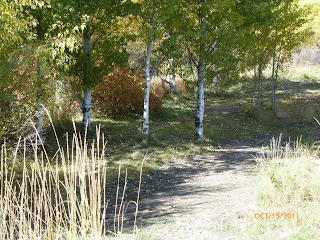 This is it for Sun Valley.  We had so much fun we hope to make it back in two years (next year we need to be in Delaware by October 1st for a caravan down the east coast.)
I almost forgot to mention, the The Parking Lot Host counted a total of 109 rigs, every shape and size parked in the River Run Parking Lot.  No water, no sewer, no electric.  At 7:01 am everyone was out turning on their generators, including us. A couple of mornings Joe had to scrape ice off the generator. There wasn't quite enough sun for our solar system and we wanted our coffee first thing in the morning.  I must say also that the bathroom and showers in the River Run Lodge were very luxurious, they even provided big fluffy towels.
We were parked for nine days (left Monday 10/17) and probably could have gone several more days, of course we were gone and ate out almost every day.  All the venues had very reasonable food.
Safe travels to all
Nancy and Joe
Posted by Joe and Nancy Conrad at 4:05 PM