Vegas to Quartzsite and Yuma

Why are we driving so much? Joe has a dental appt in Los Algodones on Monday 10/24.  We want to be in Yuma by Thursday or Friday so we can drive over to Los Algodones and find the dentist and of course have shrimp tacos.  This is our first experience to use a dentist in Mexico.  More about this experience to come.

Leaving Las Vegas about 9:00, wanting to avoid rush hour traffic.  We breezed through the interstate system like we knew what we were doing.  We were in Henderson before we knew it and continued south on Hwy 95.  Somewhere along that road we cam across acres and acres of solar panels and huge power lines coming and going from there.
These pictures, as most of them, are taken as we are driving

I continue to have lines go through my pictures as on this one above.  Not all the pictures but now and then and sometimes there are 2 - 3 lines.  Not sure what is causing this.
Not much to see in this part of the desert, anxious to get to the Sonoran Desert, which is our favorite.  Finallyarrived to I-40 and headed east through Needles, into Arizona and then south on State Hwy 95 to Lake Havasu City.  I visited Havasu in about 1972 shortly after the London Bridge was completed.  I really liked the small little town and wanted Joe to see it.  Well, now the city is quite large and lots of traffic, nothing looked familiar.  It was my turn to drive and just as I had given up hope of finding the London Bridge, there it was and I was able to swing over to the right lane and then into the parking lot without thinking how to get out of the lot.  Luckily this was not the busy tourist time so the parking lot was not busy but it was not beant to pull a 28 ft trailer into it.  I had no problem getting in wut when it was time to leave I told Joe that it was now his turn to drive.  Walked over to the bridge and got a few pictures but I was a bit disappointed that everything was so built up around it I couldn't even get a good picture.  The was water was dirty too. 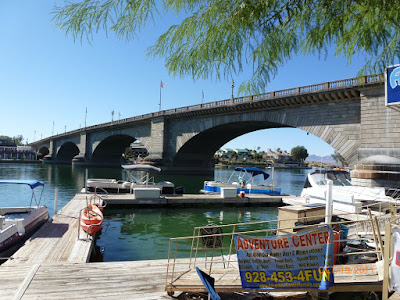 We continued on south to Parker, a beautiful drive through canyons and along the Colorado River.  We were going to stay in Parker, I had heard of several good BLM areas to camp, however I had no idea it was going to be so hot this time of year.  It's the middle of October, I thought it was suppose to be cooling off.  Should have stayed in Sun Valley another week.  So we continued on down to Quartzsite and use our Passport America  for the very first time.  We pulled into a very nice place and to a sign right in front of us that said NO DOGS.  They sent us to another nice place across the street for $23 instead of $17.  As long as we could use the A/C I didn't care where we were.  It was 98 degrees.  It was a dry heat though!

The park has 154 sites, all leases.  If you belong to Escapees you can rent a space that is not occupied by the lease holder.  This is a popular spot and they fill up fast.  The lease holders have to give a seven day notice of when they will be here and then you must vacate their spot.  The also have eleven dry camping spots.  They have a clubhouse, very nice laundry room with brand new washers and dryers, a pool and hot tub.  The pool is very refreshing.

Entrance to park and several sites with and without park models.

Behind the stone fence is the Hot tub and pool

Our place, we are the smallest rig in here

We came out of the clubhouse after registering and . . . . . . .  A FLAT TIRE on the trailer.  It was the front curb side.  We never felt anything or heard anything.  It must have just happened as there was no damage to the trailer.  Praise The Lord!  Well this is what we have AAA Insurance for.  We got parked and a quict call to AAA and they were here by 12:10.

Above is that line again.  If anyone knows what I am doing wrong I would appreciate some advise. 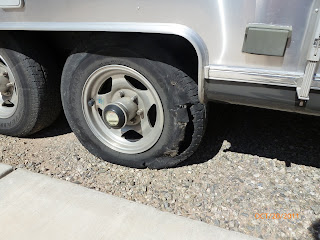 Now this is the way to change a tire, especially when it was 100 degrees.  I offered the gentleman a cold root beer but all he wanted was water. 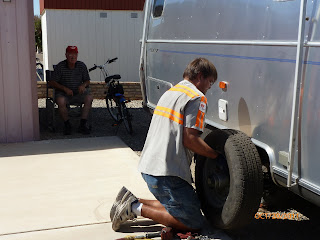 We got the spare and then found Discount Tire and ordered a new one.

Now, finally we headed out to Imperial Date Farms for a date shake, about a 10 mile drive out through the farm lands.  We got there at 5:01 pm just as they were turning the sign to closed.  Once again, Praise the Lord!, the young lady unlocked the door, stuck her head out and asked if we wanted a date shake.  What a sweetheart to open up and made us two large date shakes, then we also bought several pounds of dates.  It was soooo yummy and worth the 10 mile drive out there. 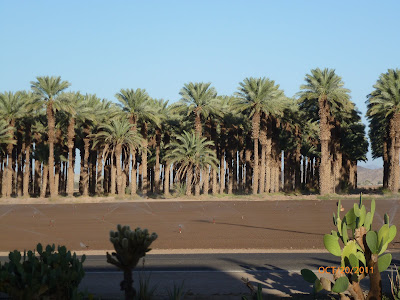 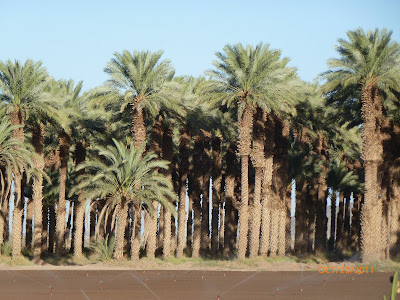 The bags are around the dates.  The dates grow on a 12 - 18 inch stem, they are hand pollinated and then a mesh bag tied around each stem to keep the pollination in and the birds out.
No wonder dates are so expensive 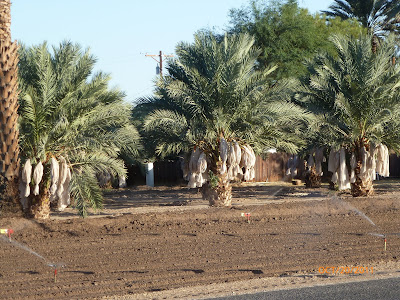 I have received a couple of emails asking if we are spending the winter in Yuma.  No, just a couple of weeks while Joe has dental work and recovery.  We don't have definite plans except we will be in La Mesa, just east of San Diego for Thanksgiving with our daughter Brenda and Tom.  Then we will work our way east along the southern route.  We have reservations at Pensacola, FL the end of December and in January reservations at Santa Rosa State Beach Park, several miles east of Pensacola for a few days.  We will eventually be in Jacksonville Florida to Visit our son and daughter in law Tim and Samantha.  Tim just retired from the Navy after 21 years.  Eventually we will go to Key West Florida and then when it starts getting too warm we will start heading to Maryland to visit Joe's sister Ellen.  Then, we're not sure but would like to be home about the first week of June.

Oops, this got to be too long again.