Next stop was only 125 miles away at the Topsail Hill Preserve State Park for the annual Airstream Canopener.  The fees there were $42.00 per night, yes that's right $42.00.  We have never spent this much for a "Resort" RV park let alone a state park.  Well, this place is like a resort, including a swiming pool, tennis, basketball courts and three small lakes to fish in and they actually catch good size fish. I didn't know what to expect, but was pleasently surprised, the place was fantastic and very clean.  They even use a blower to clean the leaves and pine needles from every spot before the next campers come.  We had a great time,  no planned activities except for a the best dinner and breakfast pot luck I have ever attended.  The rangers also put on a "Breakfast with the Rangers" for us, all cooked by volunteers of the park.  The Rangers gave a very informative talk about prescribed burns in the forest, including a slide show.  Even though I am still recovering from the shock of $42.00 per night, since it was only three nights we will probably attend this event again next year if we are in the area, and I think we will be. 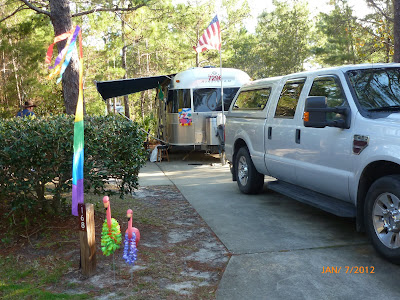 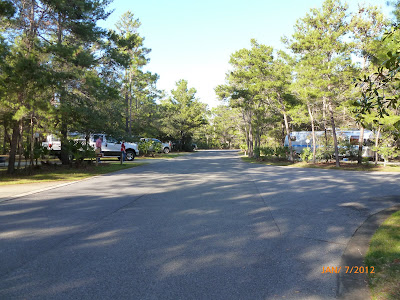 Waiting for the dinner bell to ring 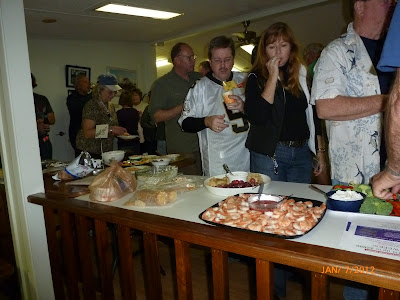 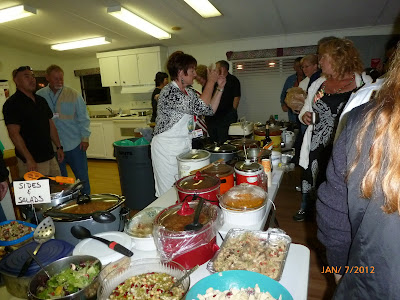 We didn't get away from the Airstream Canopener until about 11 am Sunday so our next stop in the small town of Carabelle seemed like a long drive even though it was only 130 miles.  But along the way we stopped  in the cute little town of Apalachicola, had a late lunch, walked around town and actually spent money at a cute place called "The Tin Shed".  I usually don't buy souvenirs but they had the cutest pink flamingo I have ever seen.   They had a lot of junk too as Joe calls it... "A lot of leaver-rites" (leaver-rite there)  Apalachicola is the oyster capitol of the world, they have an annual oyster cook-off in one week.  Unfortunately we won't be able to stay for it.  Joe had fried oysters for lunch and they were delicious.  I had grouper, a mild white fish that was just as good. 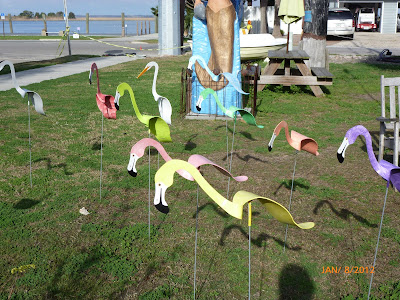 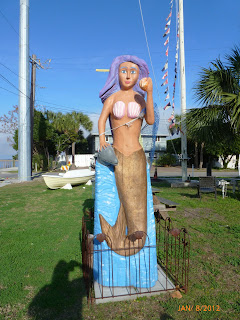 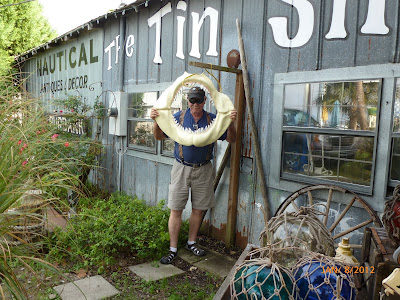 Basket of sponges, apparently years ago there was a lot of sponges brought in here and they were processed and then sent around the country. 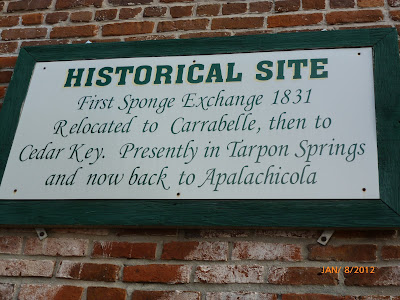 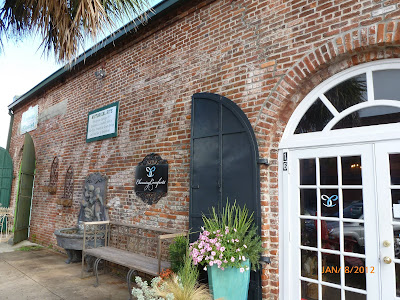 10 miles later just one mile from our next campsite

We are at a nice quiet RV Park just four miles east of Carabelle, "Ho-Hum RV Park", full hook-ups and only 29.00 per night right on the Gulf.  This place was wiped out during Katrina and has been slowly recovering.  This is a really nice place if you just want to relax.  Also close by is Tates Hell State Forest and Apalachicola National Forest.  There are two state parks that we had to pass up that we will check out next time.  One on St. Joseph Island and the other St. George Island.

Email ThisBlogThis!Share to TwitterShare to FacebookShare to Pinterest
Labels: Florida, Gulf of Mexico