New Aiyansh (sounds like ranch without the r )  is the largest of the communities of Nisga'a First Nation.  It is near the Nass River just north of Terrace.  Tther communities that make up the Nass Valley and the Nisga'a territory ar Greenville, and Canyon City. 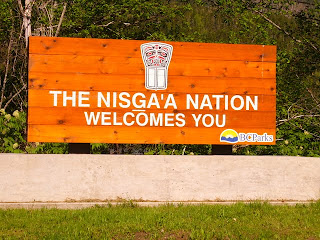 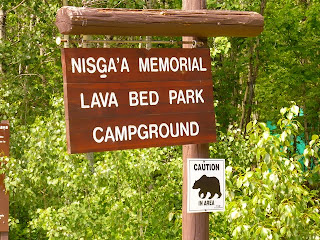 We stayed for two nights at the Nisga'a Memorial Lava Bed Provincial Park. About 250 years ago the volcano erupted, killing approximately 2,000 people creating a pocked lava plain. As the lava spilled from the crated it followed a creek bed down slop to Lava Lake and down the Tseax Valley to the Nass River. The volcano was not a mountain, the lava just bubbled up and then created a cone. Several of us hiked to the top of the cone with a guide through a beautiful forest that was not touched by lava but had a layer of black ash. Then  a little down the way and we would be in the lava area.  This area is incredible with lava flows in and out of the forest.  We had to be careful to stay on the trail as there were many pocked areas of water in the lava and if you were in a thin area you would just fall through. 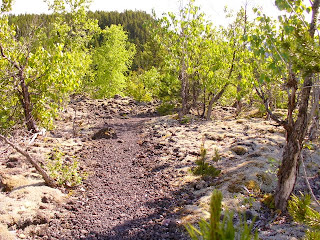 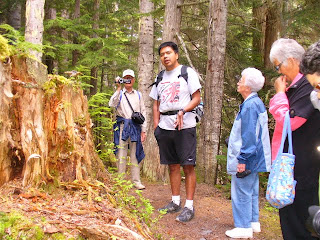 The lady in the blue is Kay, 88 years young, she goes everywhere and does everything.  Kay and Ron just celebrated their  61st aniversarry, Ron is on the far left holding the camera. 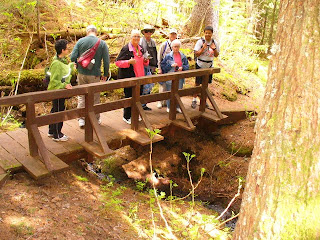 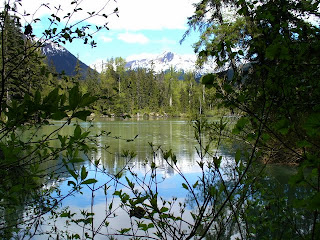 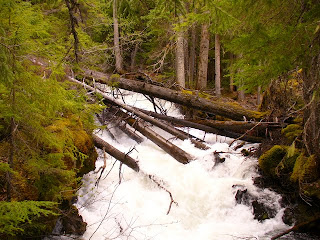 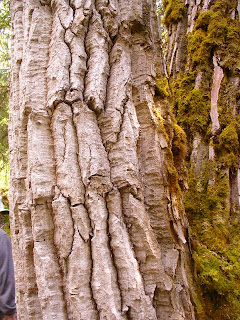 Bark of a Black Cottonwood 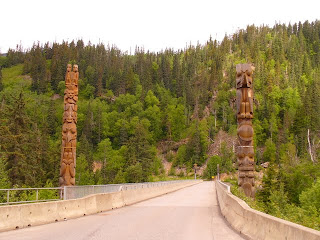 While at the Provincial Park we also visited Canyon City and the Gitwinksihkw Band, above is a bridgew crossing the Nass River on the way to their village 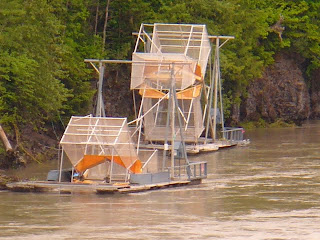 They used this fish wheel 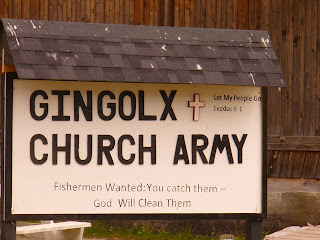 Next is Gingolx aka Greenville.  I thought this was a great sign at their church.  Since all these tribes or Bands are right on the river everyone fishes and dries their salmon.  All the areas we visited people came to talk to us to find out who we were and where we were from.  Everyone was very friendly and very talkative 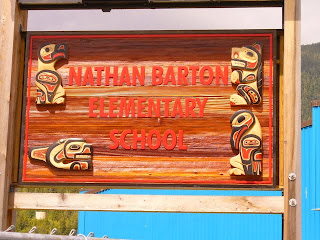 This is in front of every school representing the different bands of their area.  This is the Frog, Killer Whale, Raven and Bear 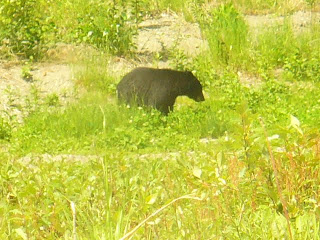 On our way back to camp we came across this friendly little guy.
Posted by Joe and Nancy Conrad at 3:45 PM