I just figured out how to get the pictures into the blog.  They might not be exactly where I want them but at least they are there.  So I have added and re-posted this blog and with the next several blogs.  I will try to write a blog for each town we stop at, so come along with us and enjoy.
Valemount is about 550 miles from home and the meeting place for our 6 week caravan.  Here we meet up with our Leaders, Doug and Debra from Courtenay, BC; our Co-leaders Gene and Marilyn from White Rock, BC; Ron and Carolyn from Parksville, BC; Murray and his dog Sandy from Union Bay, BC; Tom and Ethelwyn from Salem, OR; and of course us, Joe, Nancy and our little Buddy from Olympia WA.  Several days later we will meet up with Ron and Kay from Vancouver, BC. 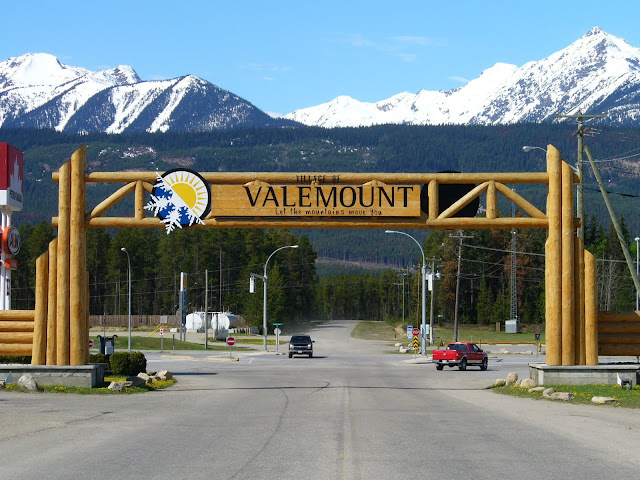 While in Valemount (four nights here) we checked out the local history at the Valemount Area Museum which showcases the unique homesteading lifestyle of early settlers and the history of the railroad.  Displays also included a restored 1914 Railway Station, Caboose, various antiques and artifacts.  Very well presented. 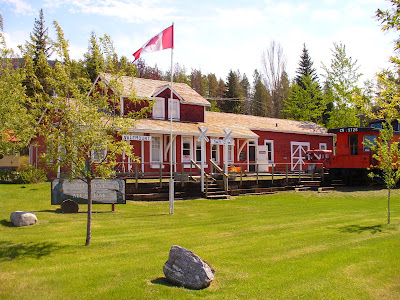 Joe on something that you could pedal down the track on, plus others below 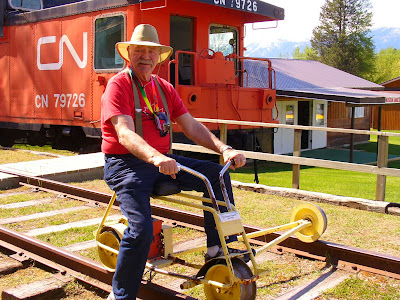 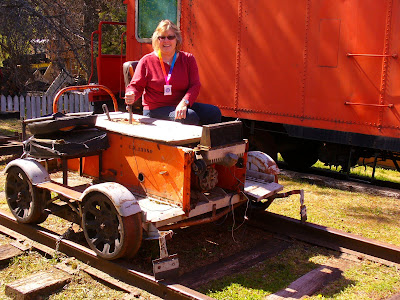 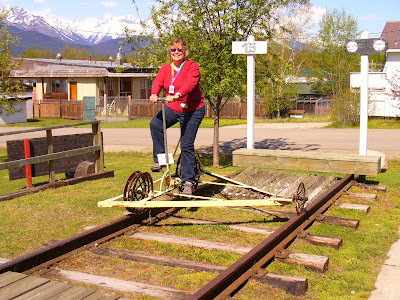 Inside the living quarters of the caboose 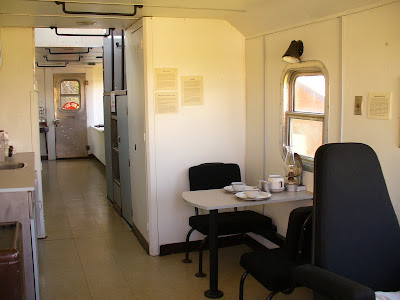 Notice the "phone box" on the left of the table 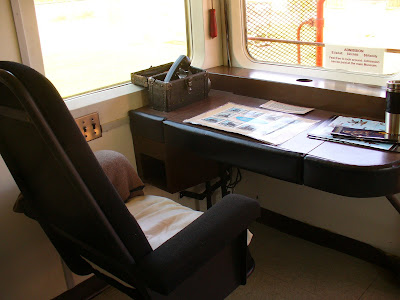 Inside the museum shows pioneer life 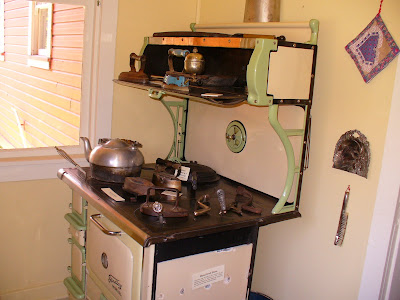 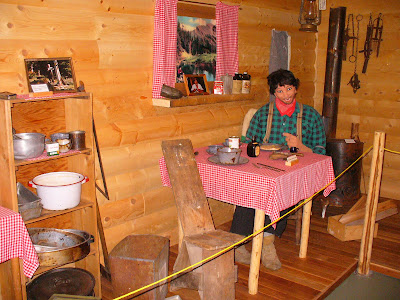 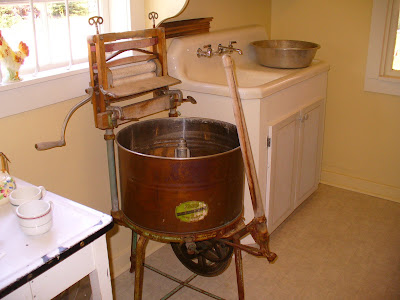 Posted outside the train station 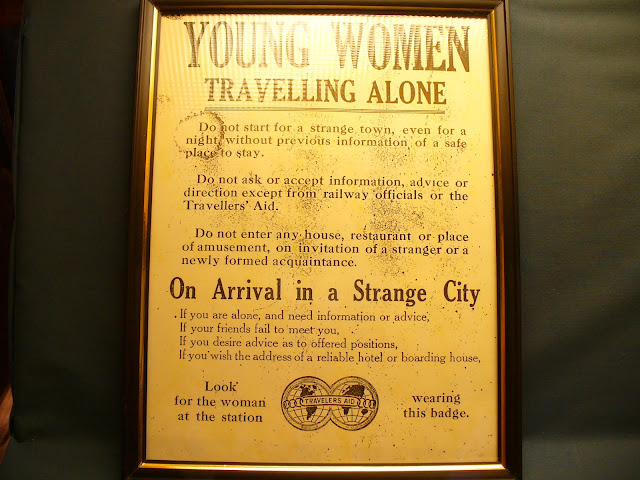 Downtown and across the R/R tracks turn left and there is a fantastic Swedish Bakery, coffee and pastries were sooooo goood. 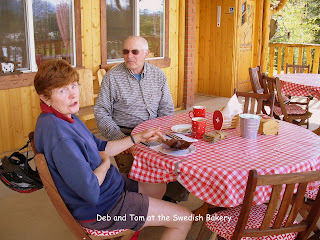 Jasper is only 76 miles away but that will be another adventure.  We did go to view the tallest peak in the Canadian Rockies, Mount Robson.  The peak of Mount Robson is 12,972 feet (3954 m)  Mount Robson Provincial Park is one of the oldest parks in BC which contains the headwaters of the Fraser River. The park has a good looking campground with showers and flush toilets.  A good place to stay in the future.

Mt Robson is straight ahead with the clouds on top 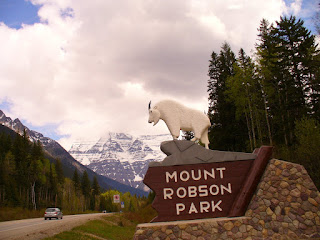 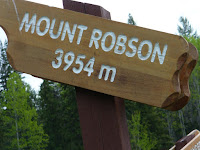 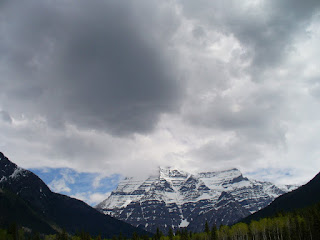 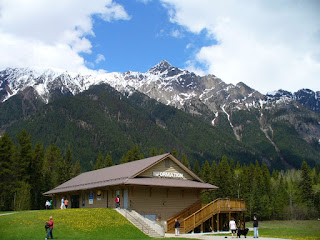 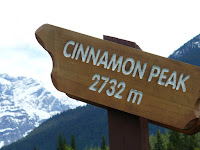 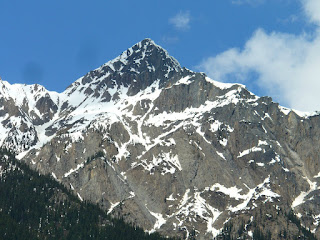 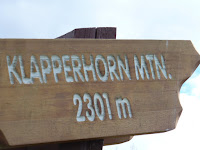 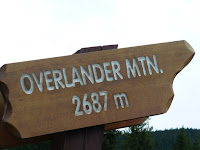 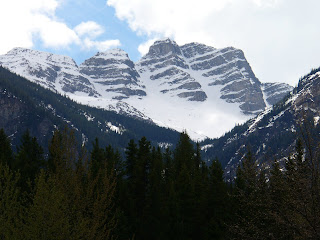 While in the area we also checked out Rearguard Falls.  This may not look like much right now with the water so high, but when the waters are down in the late summer/fall  this part of the upper Fraser River is the end of the line for the Chinook salmon that just can't make it up over the jagged rock cliffs.  By the time the salmon return to this point the fish have survived several years at sea to return to the river of their birth, the mighty Fraser River.  From its estuary in BC's lower mainland to this point the Chinook have migrated upstreem over 744 miles )1,200 km).  Some of the salmon are successful battling over these falls to reach the gravel above, but for most, Rearguard Falls marks the end of their journey as the falls are too high and span to great a distance for the salmon to jump.  What a site this would be to come back in late summer to the salmon.  Rearguard Falls is just a few miles east of Hwy 16 on the road to Jasper. 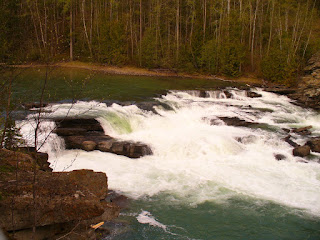 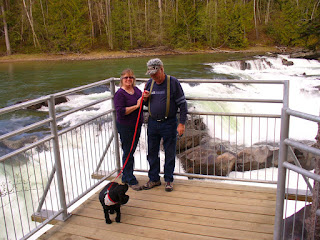 After hiking back up the hill it was break time,  Buddy is so faithful waiting for Joe. 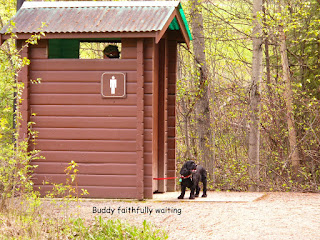 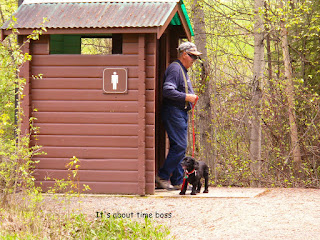 There must be hundreds of hiking trails here but with trying to recover from bronchitis it was exhausting to see the few things we did see.

We fueled up before leaving Valemount and paid $5.00 gal for diesel.  Wow!

Next stop is Vanderhoof
Posted by Joe and Nancy Conrad at 8:59 PM