A very long blog (too many pictures), I just have a hard time sorting through the pictures to see which ones I'm going to use on the blog.

Valdez is probably the most gorgeous small port town that we have been to, majestic mountains to beautiful water, some clear and sparkling and other waters were glacier waters.  Mountains all around us, with glaciers and or ice/snow packs.

I must give a "good plug" to the folks at Bear Paw RV Campground.  We came in and paid for our 4 nights, which included EWS, good cable, excellent internet and free showers, what more could you ask for.  Well there was one more thing....Joe scheduled a fishing trip for Saturday, the day we were leaving so we extended our time for 2 more nights (after a 12 hr day of fishing he would have needed a day to recover).  The Campground had a large caravan coming in but he just put them on both sides of us so we wouldn't have to move.

To back up a little; I had been checking www.wunderground the day before and then early in the morning, and it didn't look too good.  There were warnings out for Homer, Kodiak, Seward and Valdez.  It was called something like a 1 - 2 punch weather system coming in.  Storm from the northwest and a storm from the southwest were coming together, and it wasn't going to be pretty with seas 1 - 3 foot close in and out in Prince William Sound 3 - 5 foot seas.  High wind warnings.  Weather systems change very fast and very unpredictable here.  When we walked out on the dock there was no wind, high clouds and not cold. So we thought there was another change in the weather.

So, back to my story about the Captain being late.  He had been busy checking the various weather stations for the area and talking to a freighter coming in.  There were now gale warnings and 3 - 5 foot seas out close to Prince William Sound, which is where we were headed (about a 2 1/2 hr trip from Valdez) and they were predicting  5 - 7 foot seas by noon in Prince William Sound.  So the Captain explained all this to everyone, we said he could use the money but it would be impossible to fish bouncing around out there, he advised us to not go.  Everyone agreed with him and thanked him for being up-front and honest.  Of course everyone was given a refund.

Now back to my "good plug" to the folks at Bear Paw Campground.  We had already paid for the two extra days and most campgrounds say "no refund" for leaving early.  I told the Campground mgr what happened, and he immediately said no problem and we got a refund.

The Captain explaining to us about the weather and seas.

We were going to go on a helicopter trip and land on a glacier, but the only opening was for Saturday, the day Joe was to go fishing.  So we relaxed in Valdez by going to a museum of Valdez which was very interesting, also drove over to the other side of the port where there is a fish hatchery and the terminal of the Valdez oil pipe.

These fish have to really work hard to get to the ladder. 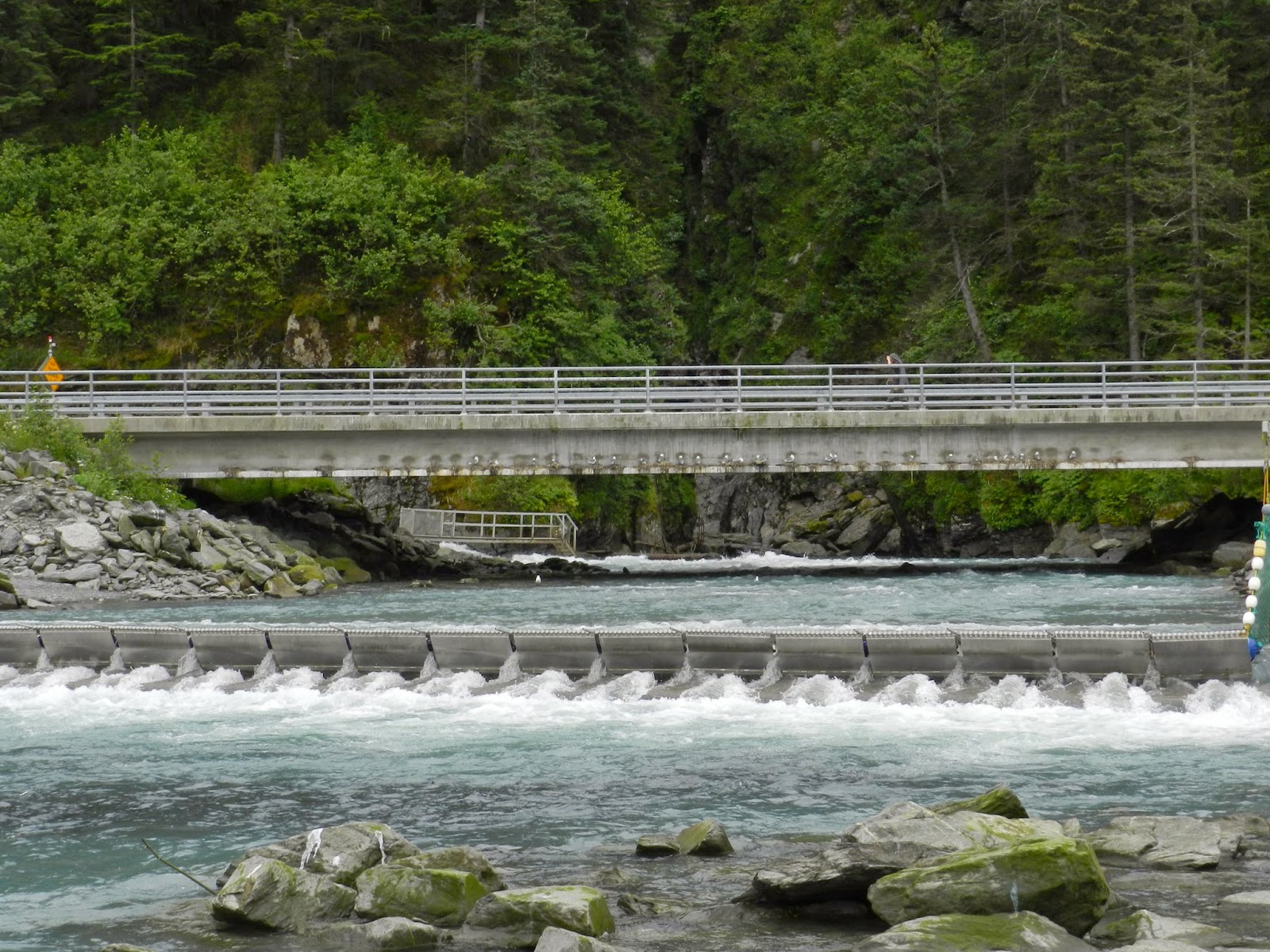 The gulls here are the largest I have ever seen.  That is a good size fish he has there. 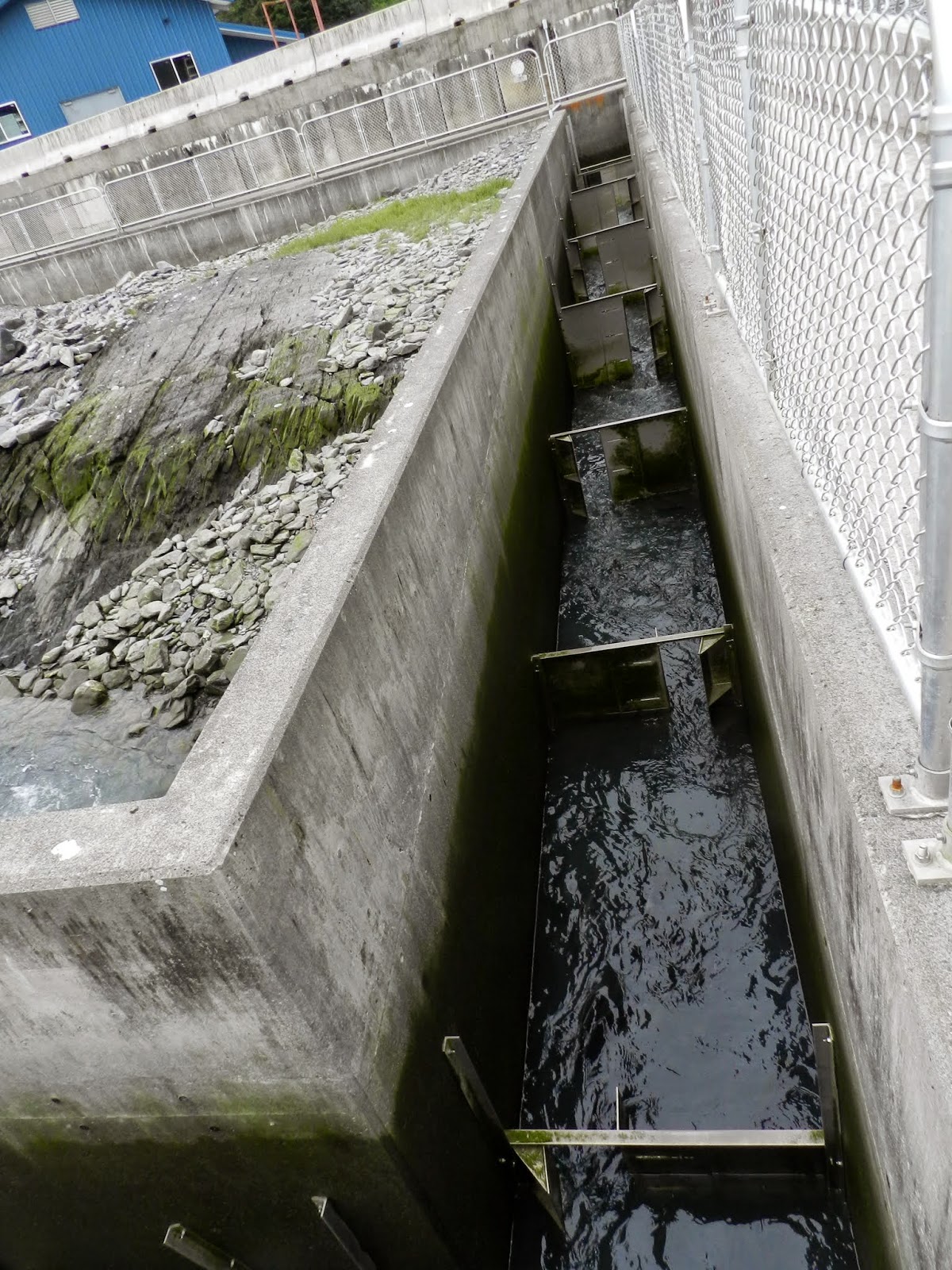 The creek behind the bridge.  The water pipe at the bottom left is coming from a water system and dam area up on the hill.  The water is piped over to this area that would be a dry creek bed if the water was not piped in.


Looking across the water to Valdez 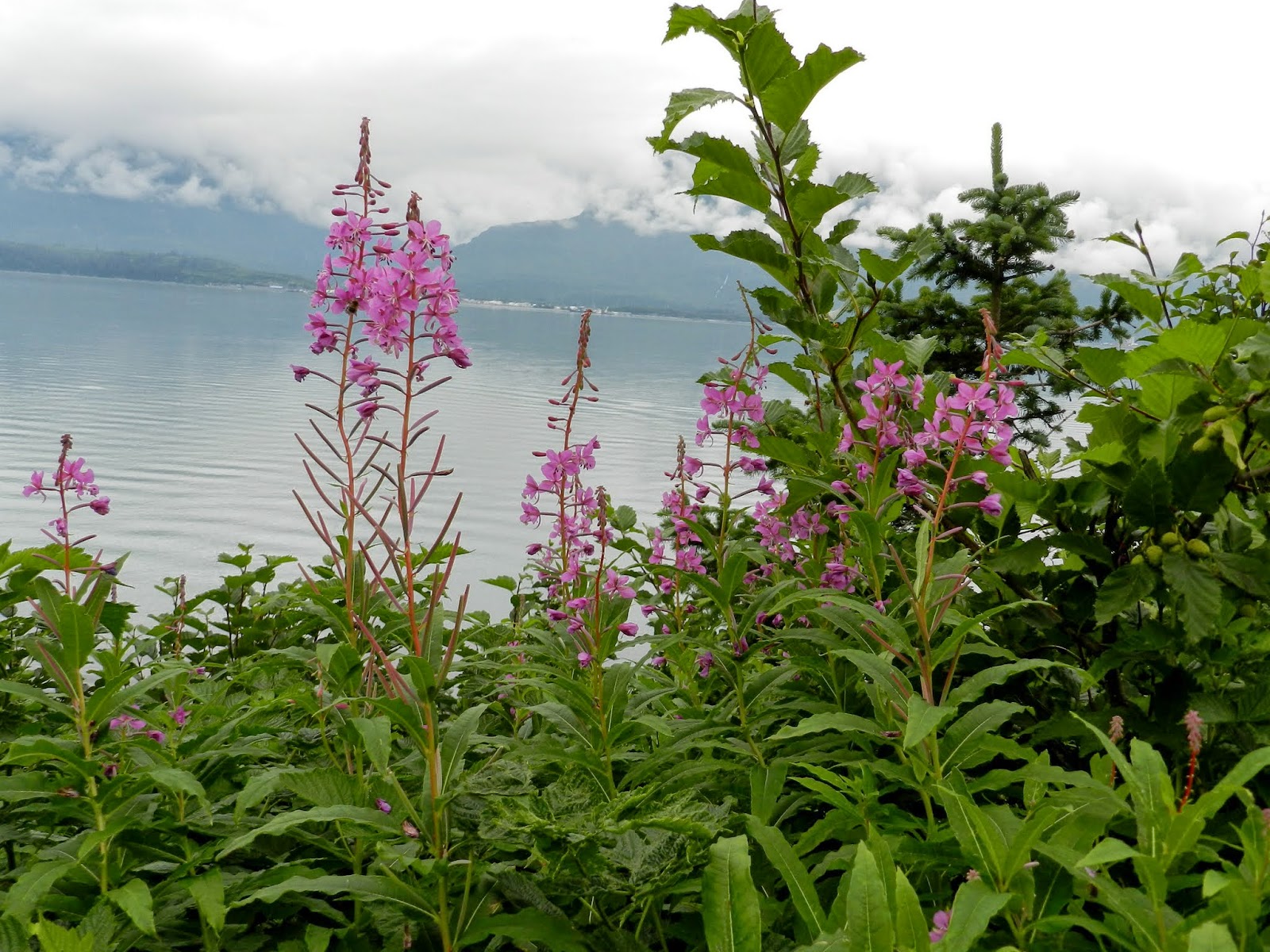 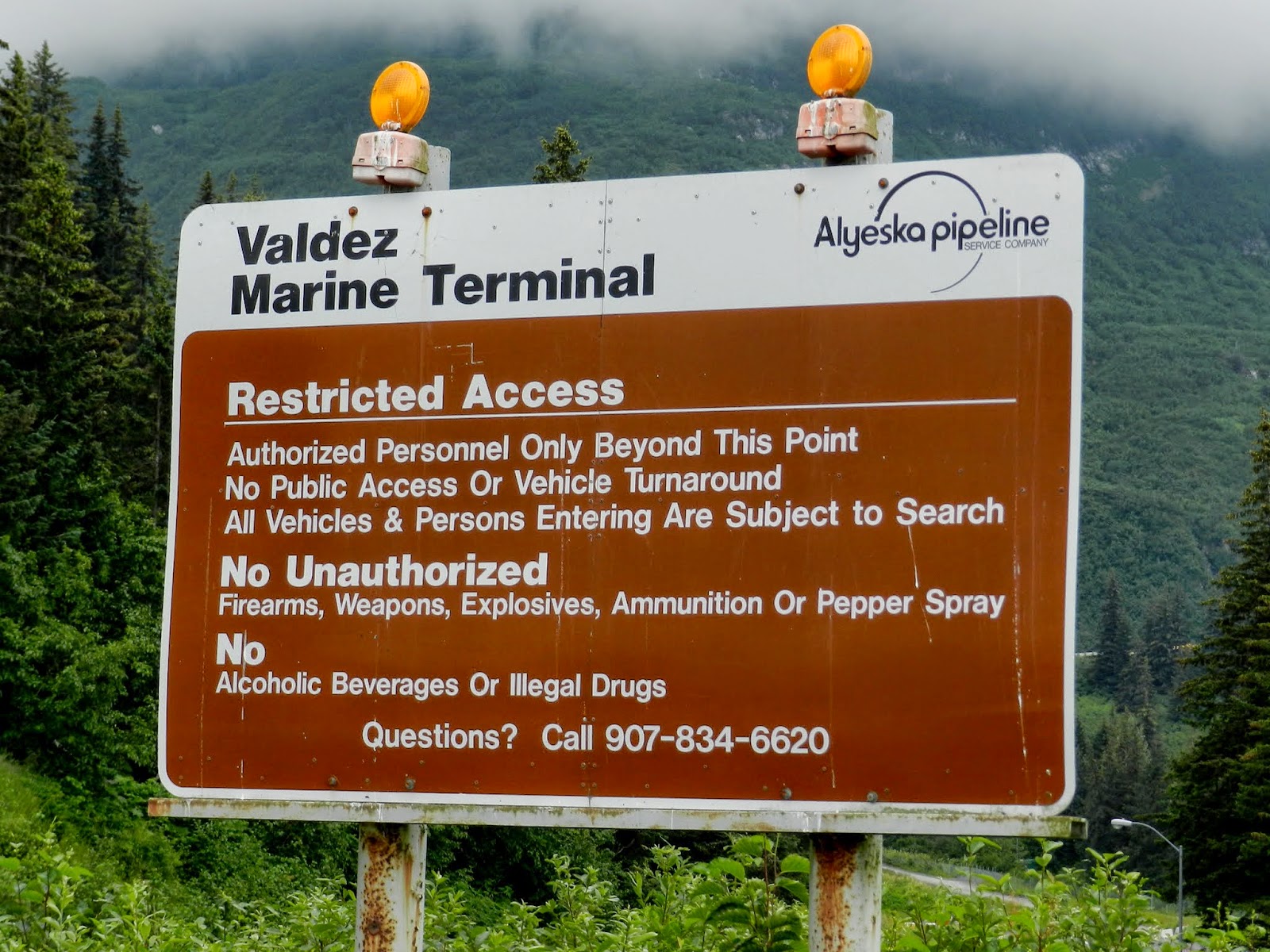 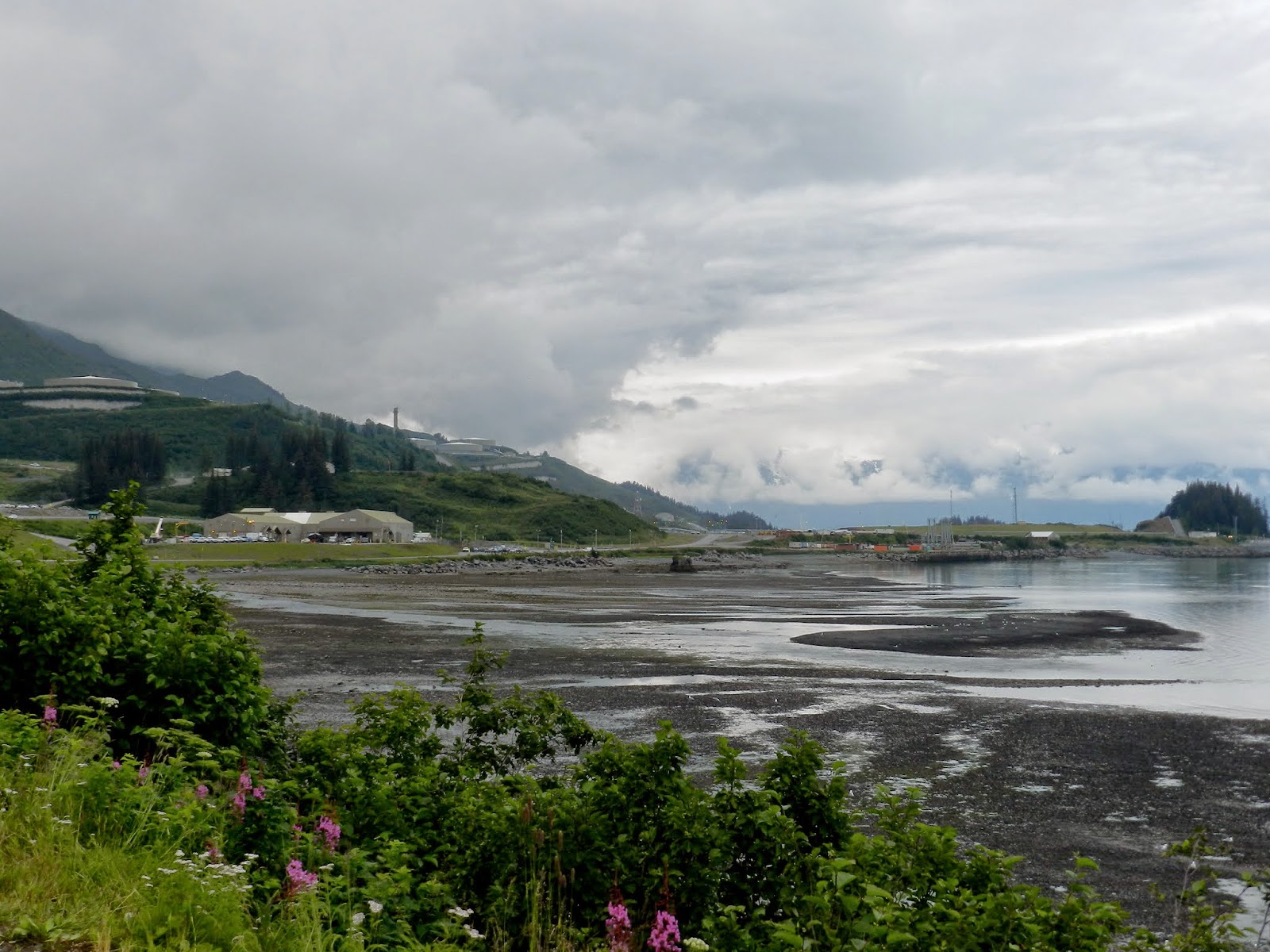 I guess this didn't come out very good, the large tanks are on the left and their dock is on the other side of that little mound of a hil on the middle right side of picture.  And of course is is low tide.
The oil tank farm is very large and hard to get a good picture at this angle.

Another picture, a little better. 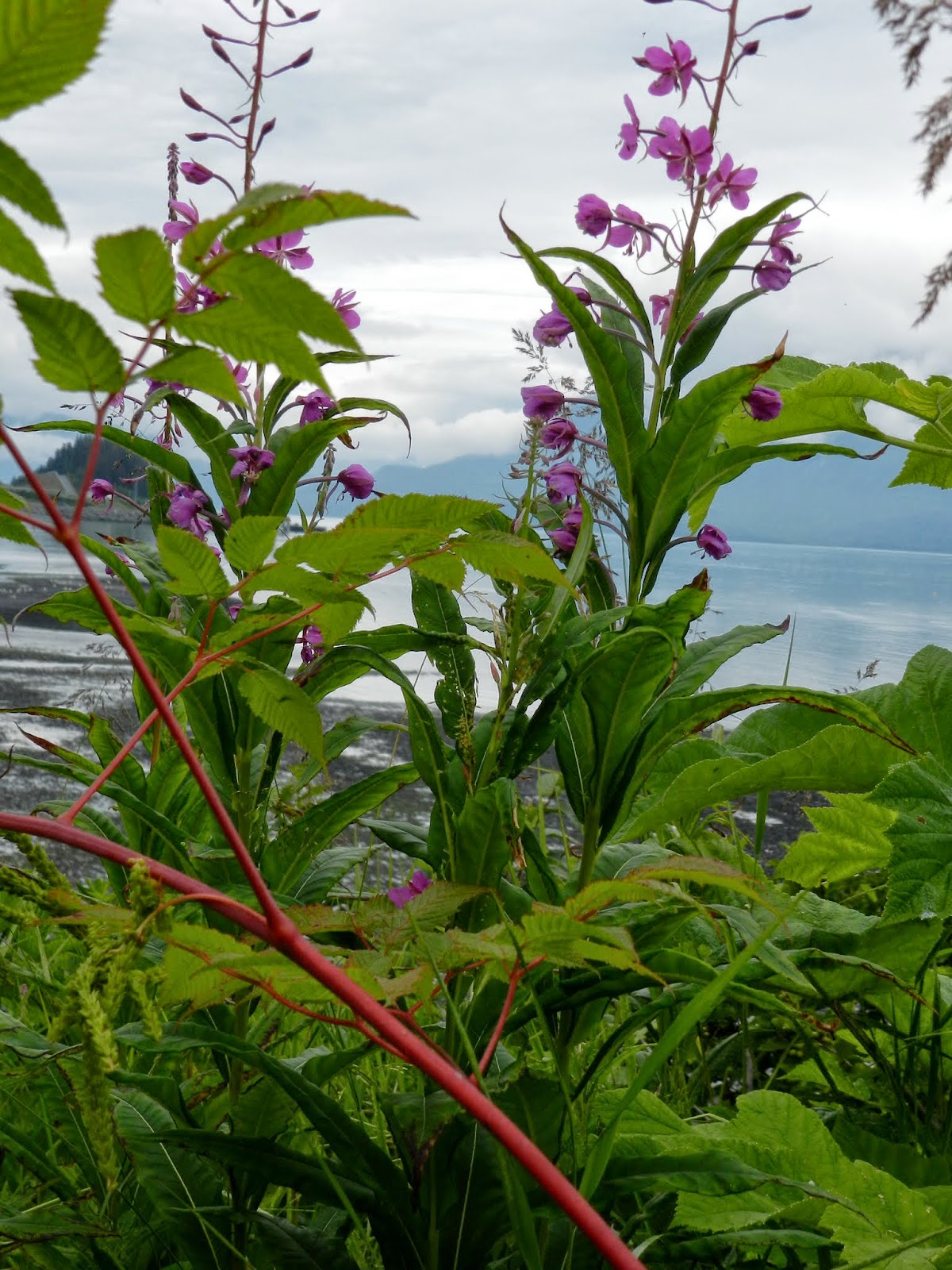 If you look through these flowers on the left the same hill as stated above.

I took this picture because of the red branch, I later found out that is is called sheep's beard, because it has long white blooms that have already bloomed. 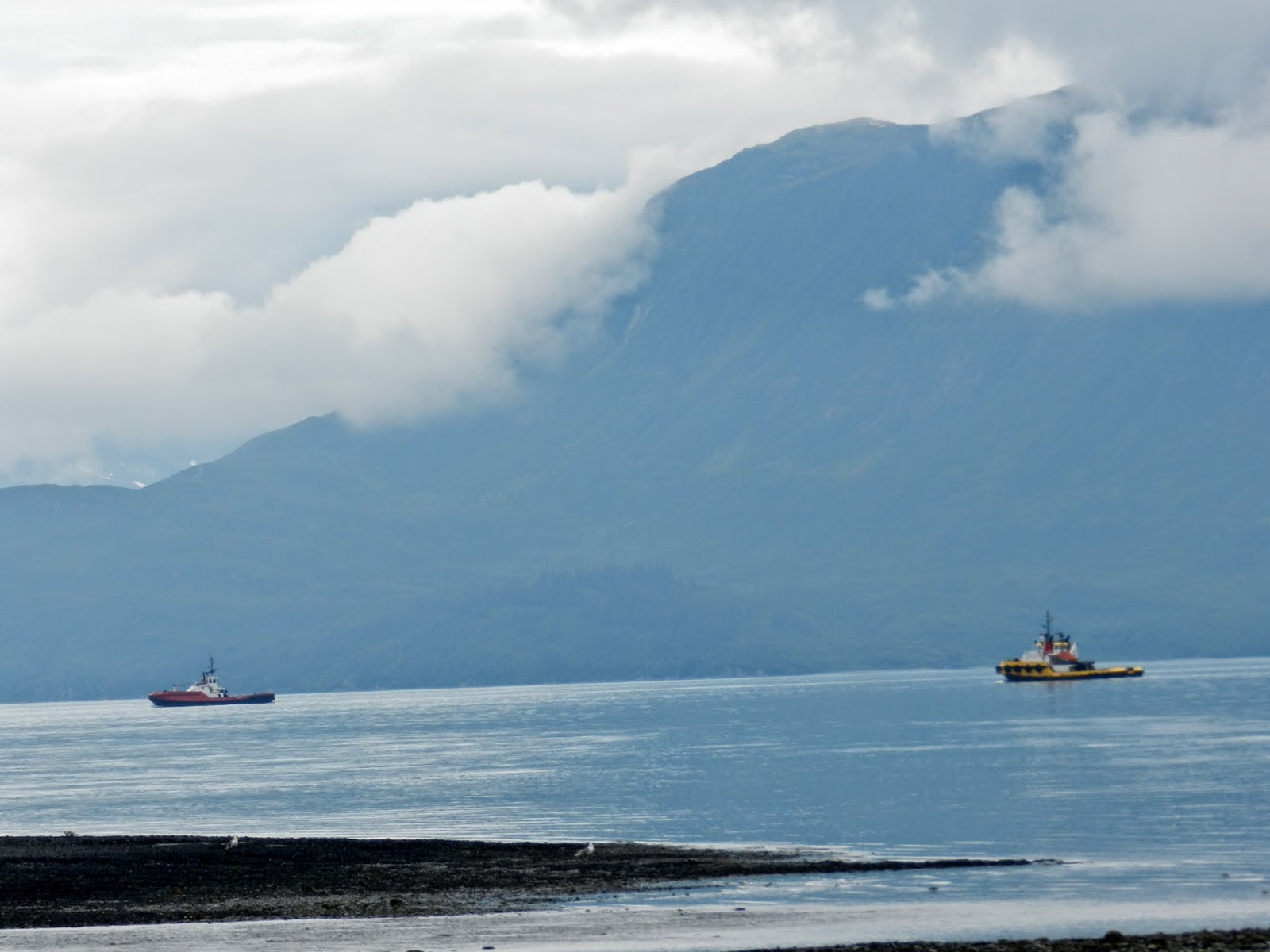 Pilot boats heading over to the oil tank farm, they will soon be taking a ship out to sea

The Prince William Sound is to the Left about 2 1/2 hrs away by boat.

Back over to the Valdez side and a drive through Old Valdez, nothing there except a couple of deep water docks.  I guess you will need a magnifying glass to read about this. 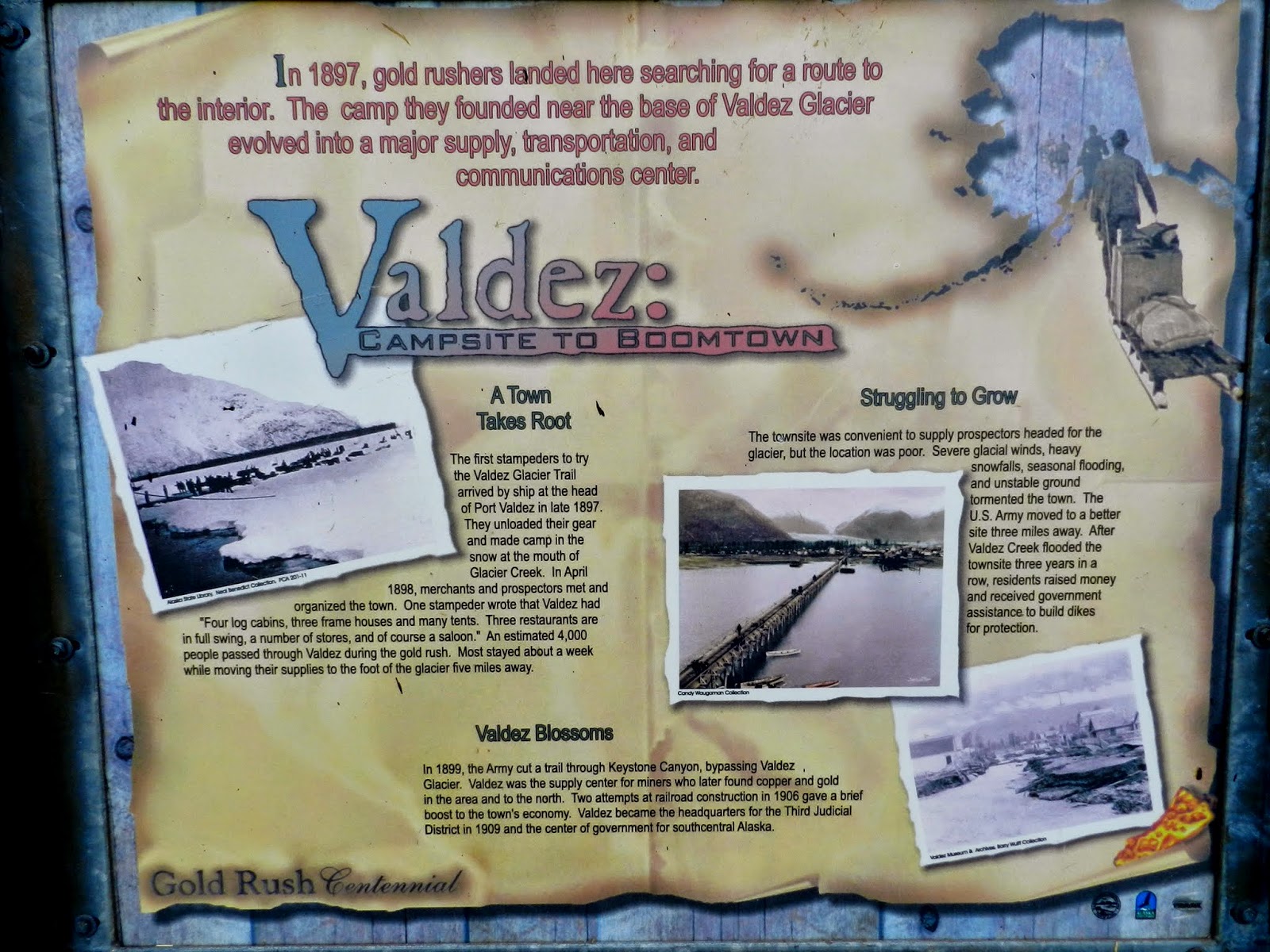 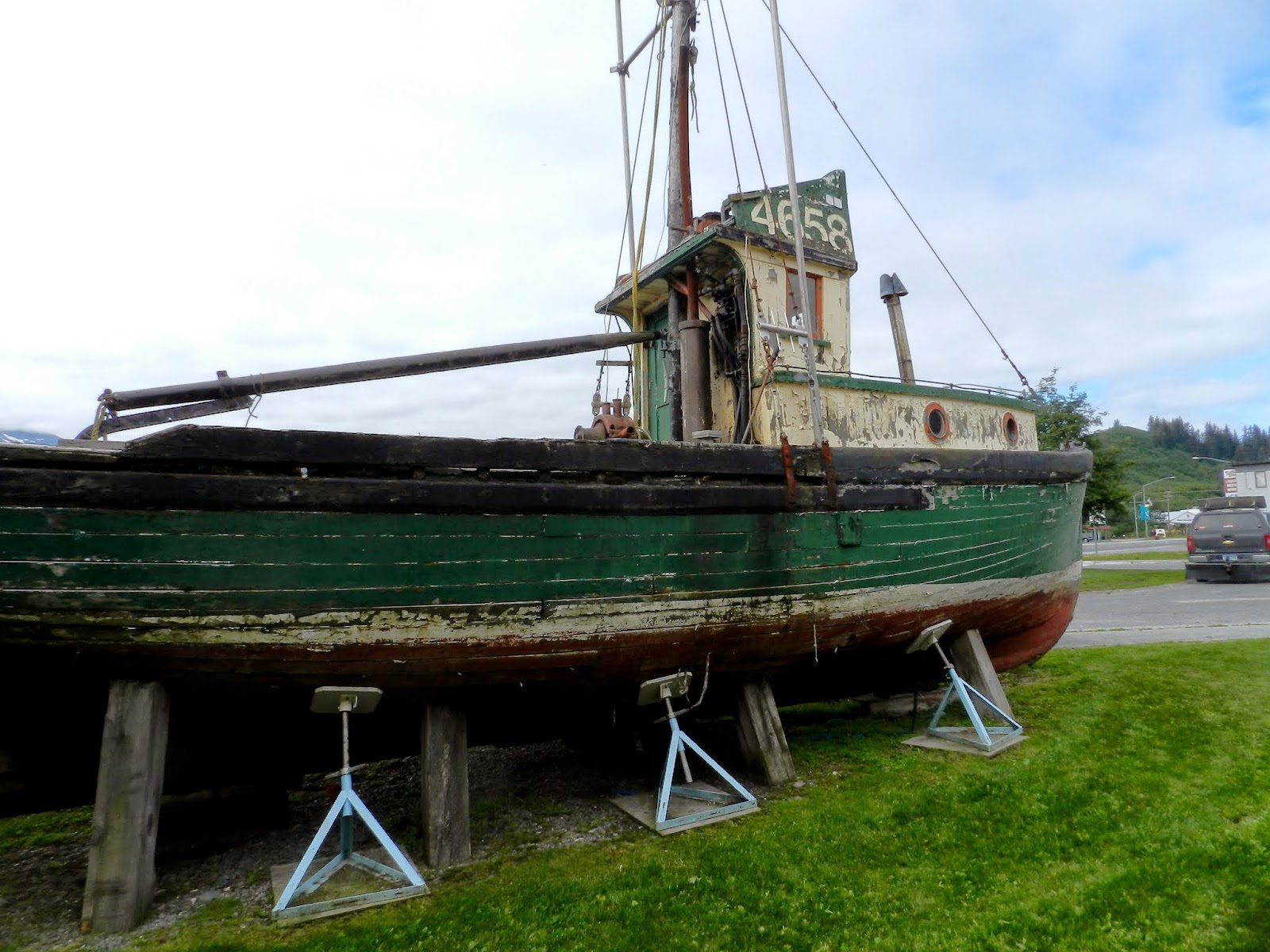 The Valdez Museum had this cute fishing boat outside

Life saving boat that was used in 1980 when a cruise ship had a broken pipe and started taking on water, Sorry for the blurry picture, this is the North Pacific Fur Fish. 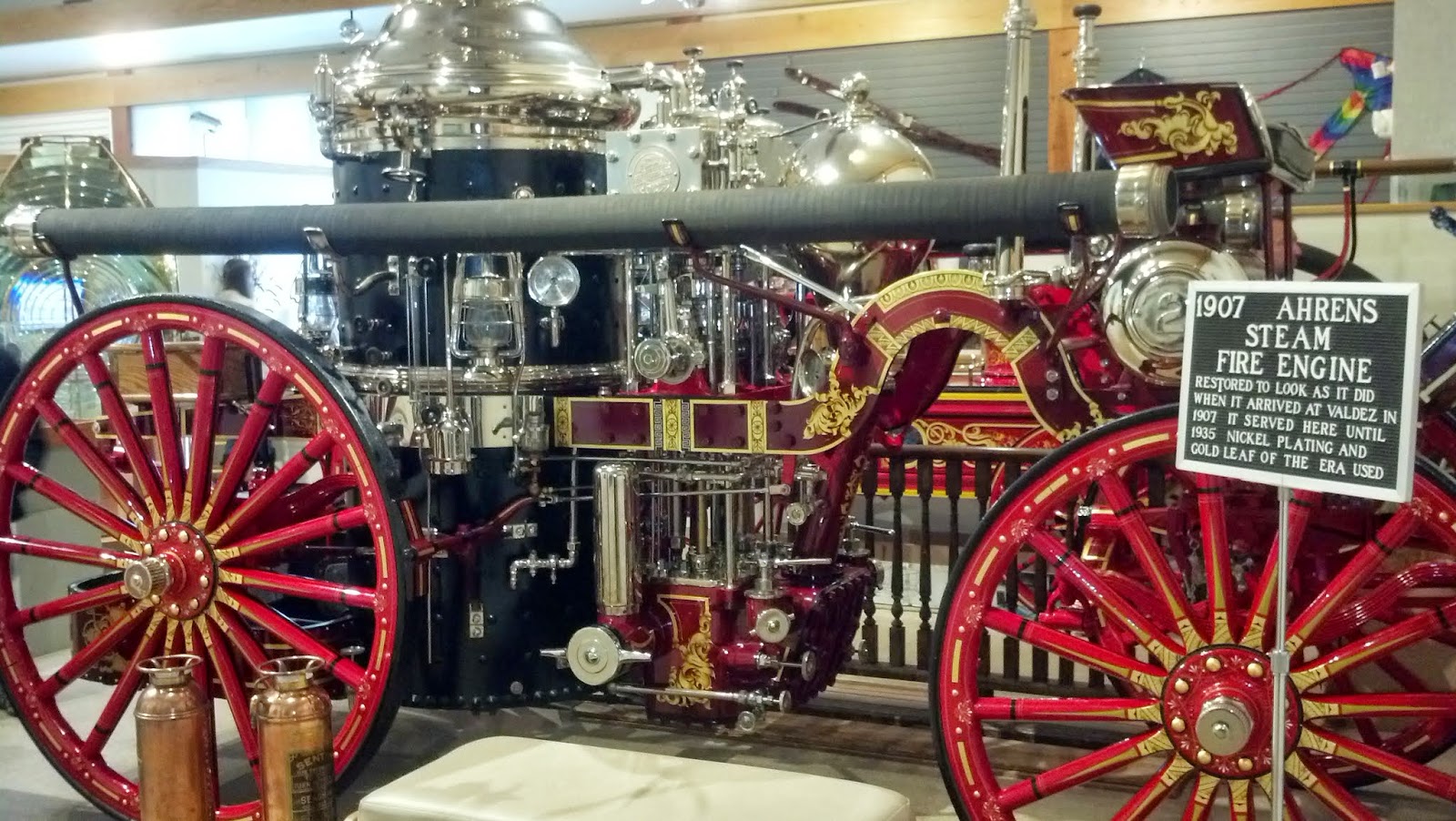 These pictures are for you Alex

This is a dwarf Fireweed, it's a bush.

These are usually white so I thought I should take a picture of pink ones.

I don't remember the name, but it is a very common wildflower. 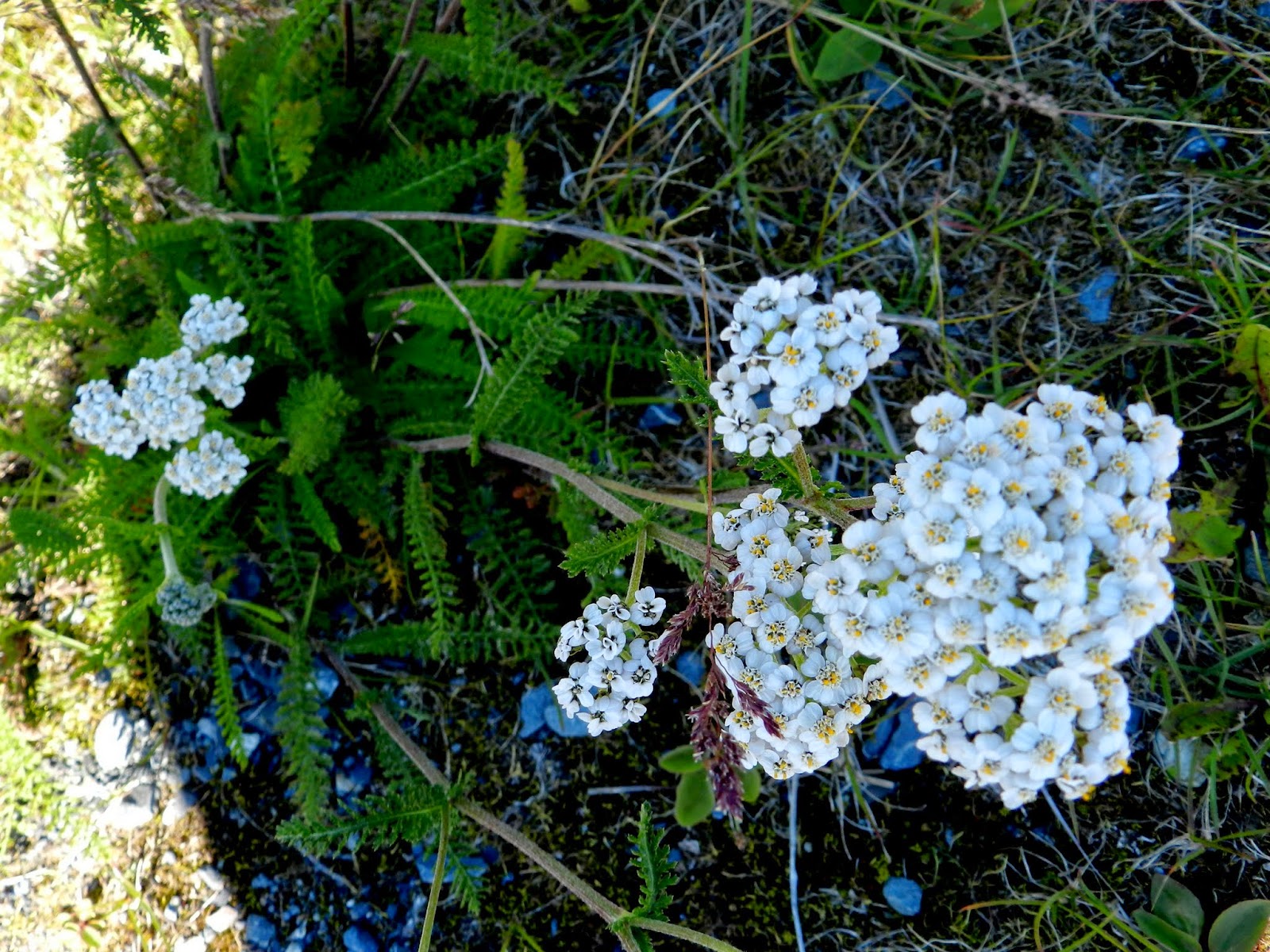 Valdez is surrounded with mountains.  We only had one clear day while here. 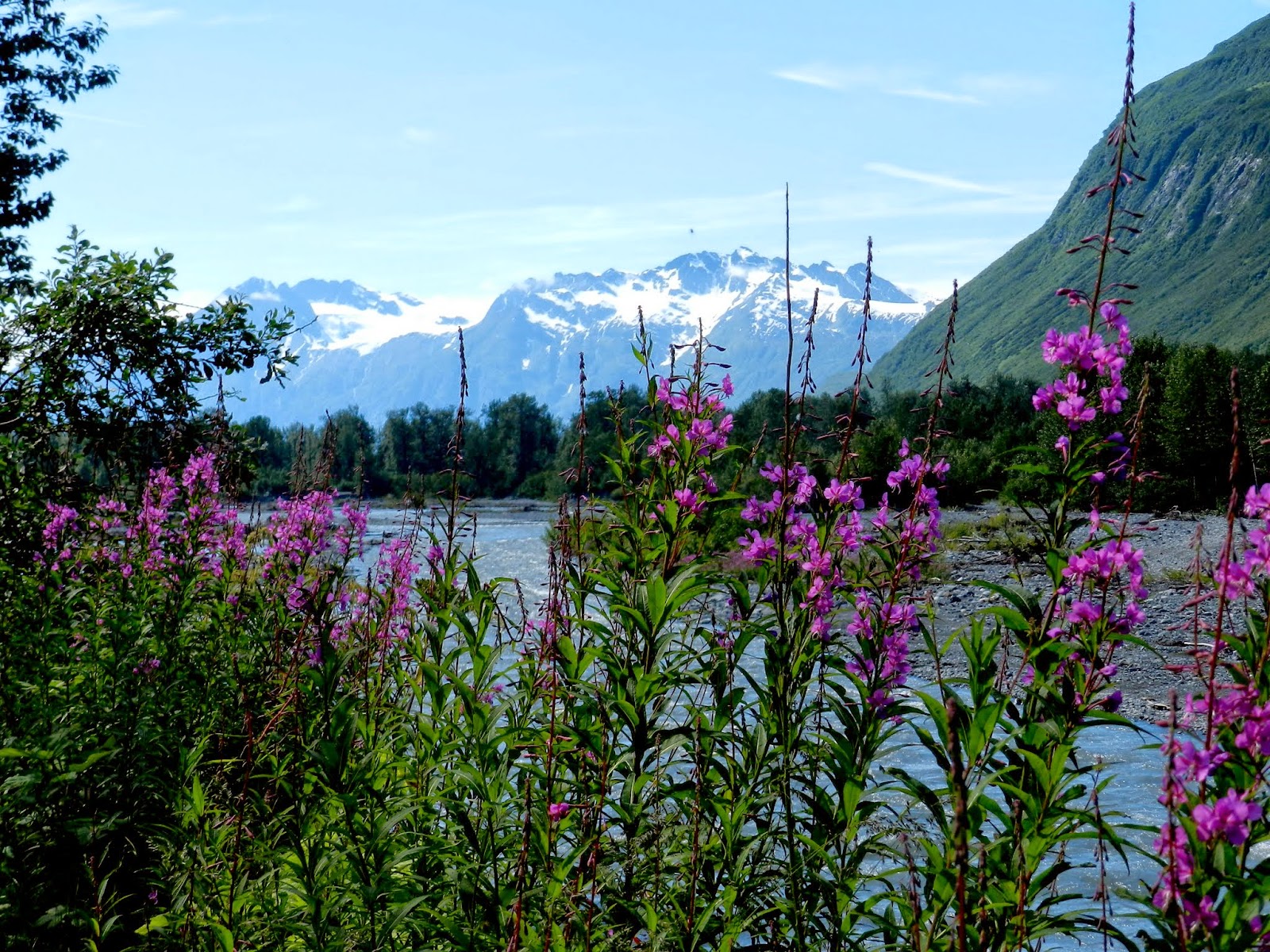 Mineral Creek, and lots of hiking trails up this canyon

The crossing of Mineral Creek. 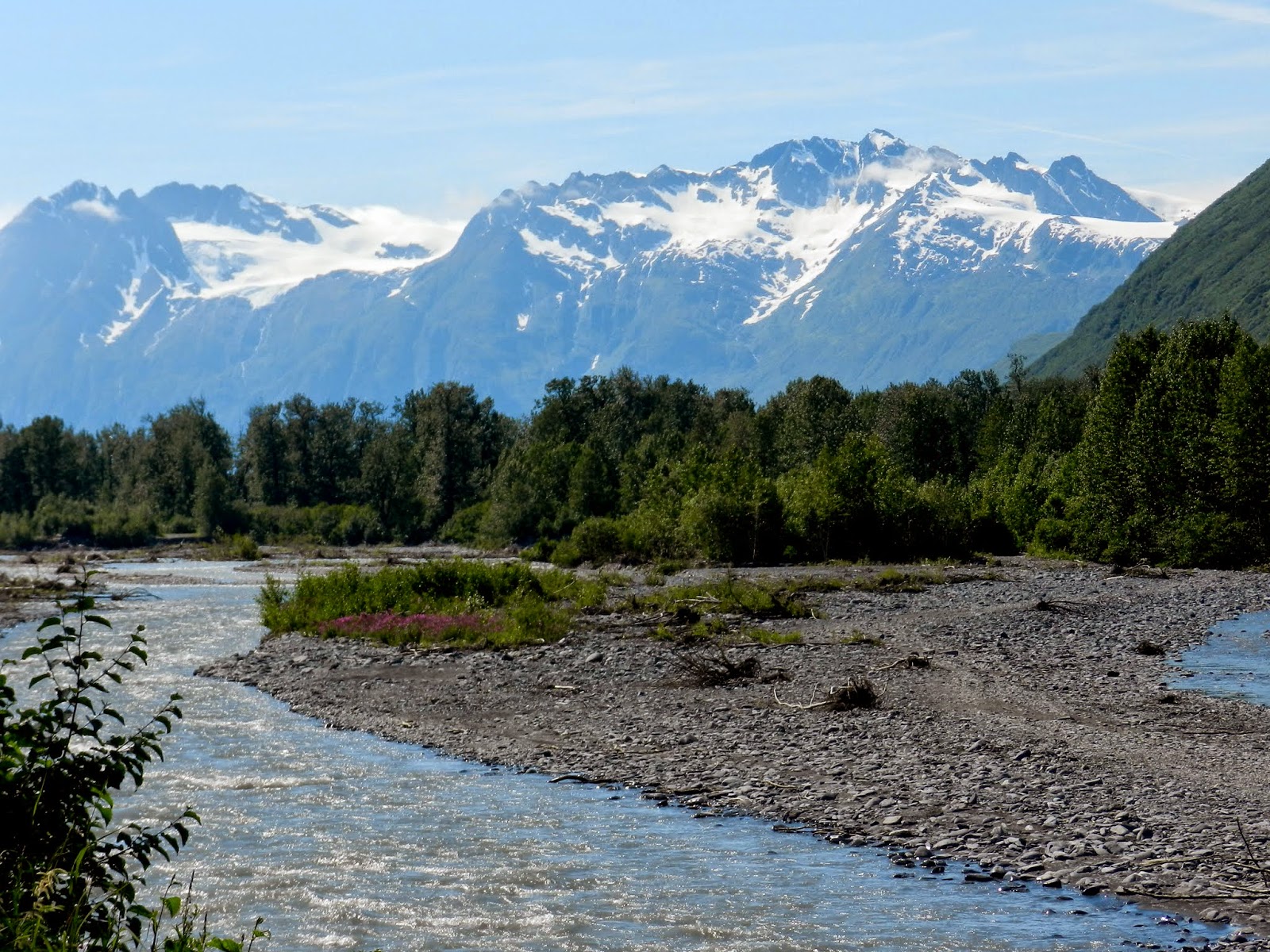 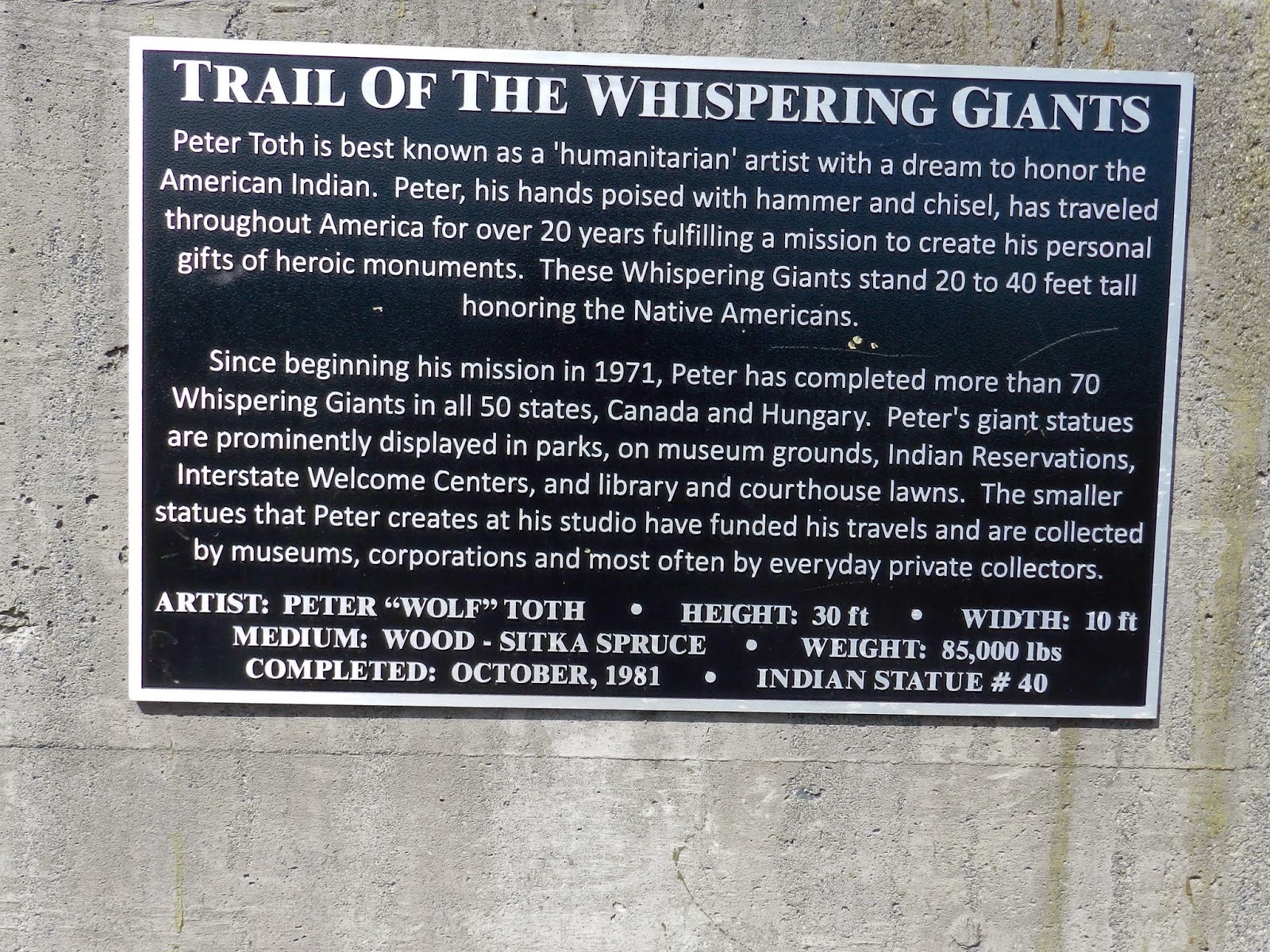 That's it for Valdez, luckily we had already been out on a glacier-nature tour while in Seward because the weather just wasn't very good for us in Valdez.  However we have been very blessed with excellent weather 99% of our trip that started May 14th.

Thanks for stopping by, have a great day.

Nancy
Posted by Joe and Nancy Conrad at 6:33 PM