It's supper cold in Benson, lows mid 20's highs mid 30's and windy.  It was just plain cold.  While in Benson we met up with Jerry & Suzy of "Our Life on Wheels".  We spent a couple of hours visiting and drinking coffee.  Jerry is now one of the directors of the SKP Saguaro Co-op which has about 300 lease holder members.   Wow, 300!  He is one busy man.  And I am sure that Suzy keeps him pointed in right direction.  Very delightful people, I hope more of you get to meet them.

After spending a couple of extra days in Benson and carefully studying Weather Underground (www.wunderground) we decided to make a run for it to El Paso TX.  We pulled out of the SKP park at 0800 sharp.  The clouds were looking pretty dark, and by the time we reached the New Mexico border on
I-10 we saw snow flurries, by Lordsburg they were sticking in the fields

It's starting to get serious 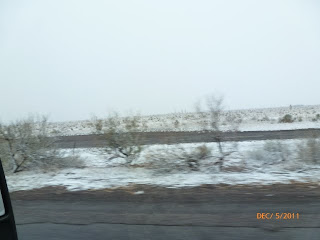 We kept on going, through Deming, and through Las Cruces and finally to Fort Bliss (El Paso).  It's a good thing we had cheese and crackers and some dates in the truck.  I continued to check www.wunderground on the phone and was watching the storm on the radar.  We were moving faster than the storm so we were able to drive out of it right as we got to Las Cruces but then I-10 turns south to El Paso.  By the time we got to Fort Bliss AFB FamCamp the storm had caught up to us.  Shortly after we got settled in I saw on the news that they closed I-10 from Lordsburg to Las Cruces.  So glad we decided to keep driving and not stop or we would have been caught somewhere along I-10.

We went to bed early and woke up to a beautiful layer of snow and 18 degrees.  I didn't go out to take the picture until about 0900 and a good amount of snow had already slid off the truck and trailer.  Nice and warm inside though, we had to run the Olympian Wave 6 Catalytic heater and the little electric cube heater all night.  Of course we always have cross ventilation when using the catalytic heater.  It finally warmed up to about 33 degrees during the day but as soon as the sun went behind the mountains the temperature started dropping fast.

The rest of the day was uneventful except for touring the area looking for the main gate so we could go to the commissary.  We eventually got there.  The commissary and PX is the largest we have ever been in they are both only about one year old.  It was like we were at the mall.  Not sure how many men and women are stationed here but probably several thousand.  They definitely deserve a new complex like this one.

The FamCamp which is off base is also new with 133 spaces, a beautiful large pet area and a large playground, a large family room with several chairs and sofas and a wide screen TV and DVD player book exchange, and a kitchen.  Across the street diesel is $3.68 gal.  This is a beautiful place and we will probably stay here for a week.  The weather is going to warm up towards the end of the week.

Safe Travels to All