The Long Long Road to Wells, and Las Vegas Nevada

After leaving Craters of the Moon we headed back to Carey on Hwy 20 and then south on Hwy 93 toward Idaho Falls.

This is a mound of silage for winter feed for cattle.  All along the road silage corn was being harvested, loaded and taken somewhere.  I'm not sure what they are going to do with this big mound.  We saw large mounds of something that was covered with white plastic and many tires to hold down the plastic.  The pictures I took were just a blur as there was no place to slow down or stop.

The corn fields this late in the year are still green, some are green but turning brown and some are all brown.  It seems to me that they better hurry before it starts raining and snowing.

Bridge crossing the Snake River just arriving in Idaho Falls
This is one of the few places that it is legal to Base Jump from a bridge
(jumping off the bridge with a parachute)
We did not stop in Idaho Falls because we spent a week there several years ago.  At that time we took a boat ride on the river. 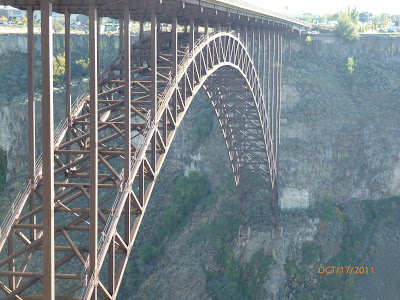 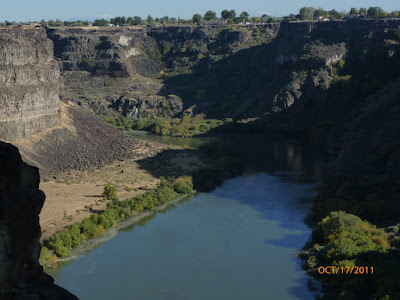 Looking down river from bridge.  You can see this is quite a canyon 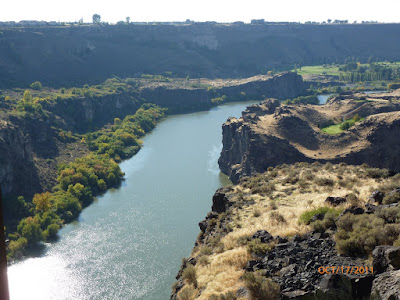 We finally made it to Wells, Nevada about 6 pm.  We stayed at a Casino/Truck Stop.  All I can say for that is we had a level spot and it was fairly quiet.  This was a long day so after a glass of wine we slept all night.
After a bowl of cereal and banana and coffee we headed down the road again about 8:30 am, tonight we will be in Las Vegas.  We are still heading down Hwy 93 and a lot of desert.  At Ely we continued south on 93 which took us up a beautiful canyon and eventually climbed to Connors Pass at 7,722 ft.  This was the scenic route and it was better that the dry barren desert.  We eventually stopped for lunch in a cute little town, Caliente.  I told Joe it was going to be BPJ or find a small local cafe.  I had a hamburger which was hand made (not from a frozen patty) that was very good, I would have it again.  In case you can't read it the first words are Knotty Pine 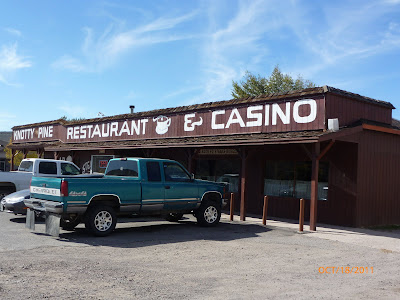 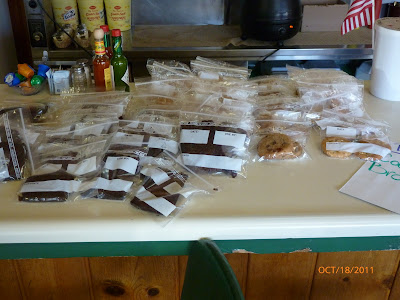 The entire place, walls and ceilings were made of knotty pine.  The T-shirt on the wall says "Knotty Girls"  That's Joe and the couple at the counter were from Tacoma, heading to Las Vegas 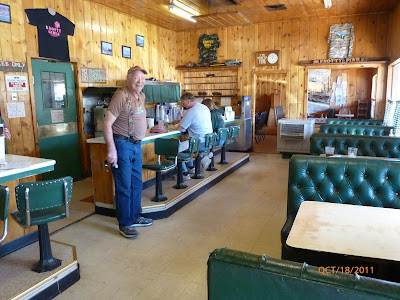 Across the street from the cafe was an old Amtrack station not in use at this time. 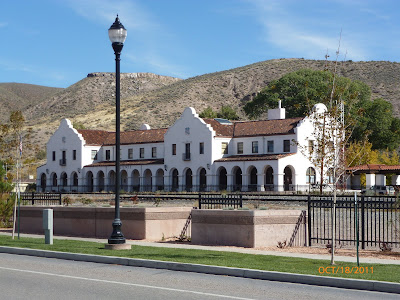 Going through some beautiful canyons. 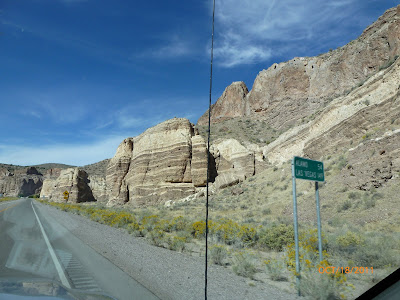 We finally arrive in North Las Vegas and pulled into the FamCamp at Nellis AFB.  Very nice place, clean and the people were very friendly.  No pictures of the fighter jets that were taking off and going right over us, eventually they stopped and it was very quiet, and after a glass of wine slept soundly all night.  Below is a tree/bush that was next to our parking spot with beautiful flowers. 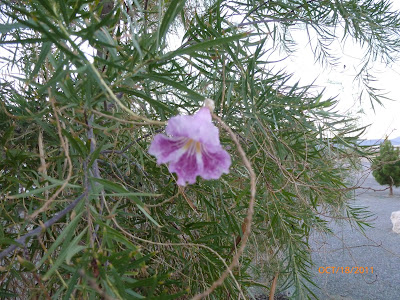 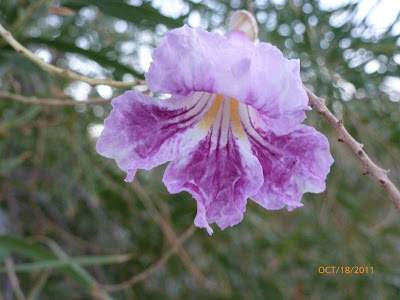 Left early the next morning for Yuma