Below is a picture of our "campground" showing a portion of the 109 rigs in Sun Valley, ours is the one to the left of the blue truck.  There are other full service campgrounds around a few south of Ketchum in the town of Hailey but not nearly enough to handle the entire crowd.  The hosts at the parking lot have been hosting for 12 years.  Thats dedication because they come in about a week before the parking lot is open and they do the striping and numbering the aisles.

Leaving Sun Valley south on Hwy 75 we decided to go over to Craters of the Moon National Monument and Preserve.  We turned east on Hwy 20 and pass two small towns; Picabo and Carey.  This is Carey, the larger of the two.  All the trucks on the right are empty livestock trailers, they might be waiting for all the sheep that need to be transported to Southern California.  No wonder lamb is so expensive.

Craters of the Moon are lava flows, just no mountain, only several places that the lava flowed or spit out cinder.  It covers about 750,000 miles
As soon as we got into some lava I had to stop and have a closer look.  What looks like a long tree branch and then bent in the middle is actually a type of lava that cools quickly and then was pushed by other lava. 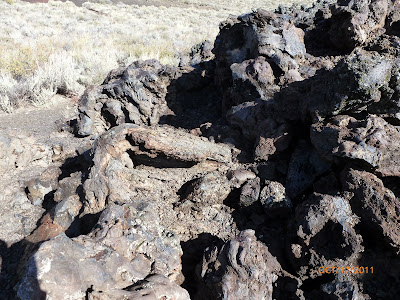 This is a cinder cone, which can spew just cinders or sort of spatter.  All the little white spots are little white plants.  During the summer the ground temperatures can reach 150 degrees.  The plants here have to adapt or die.  There is very little water. 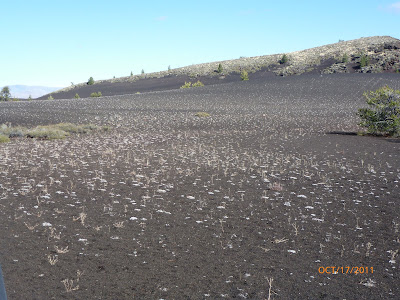 A close up of the white plants.  These plants have "hair" on the branches and leaves.  When there is moisture in the air the hairs open up and absorb the moisture for the plant. 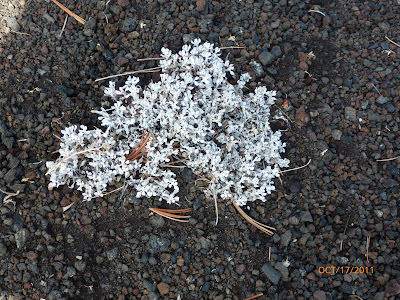 Buddy waiting for us.  He is a very good traveler but he can sure get into trouble easily if I have left anything in the truck or even my purse that he thinks might have food. 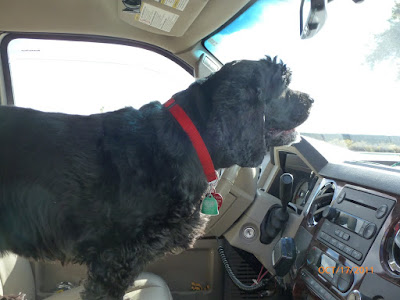 We were lucky to meet up with a Ranger that led a group to one of the lava tubes.  Along the way we came across this gopher snake.  The snake put his head into the little crevice and peered out the other side and was very still, I guess he thought we couldn't see his long body. 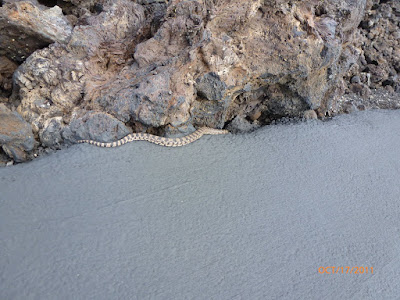 These are two circles of rocks put there from long ago Indians that traveled through the area.  There is only speculation as to what this is.  Some geologist say that the rocks were used to help hold down tepees in the wind.  This is at the top of a knoll and usually windy.  the lava tubes are close and are known as the Indian Caves because there was evidence of Indians using the caves, probably the Shoshone.  The temperatures in the caves (tubes) is much cooler than on top and could store food in there. 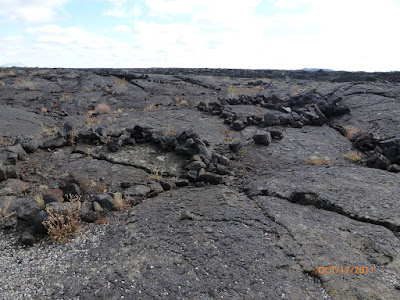 A small tube that has collapsed 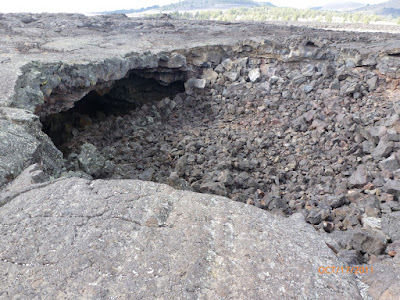 Our group climbing down into the cave 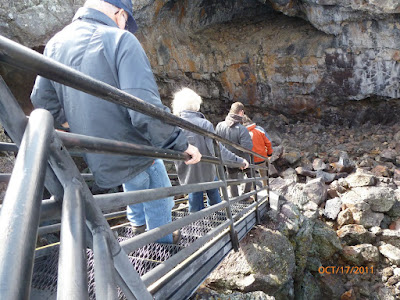 The cave was about 500 ft long at this area.  This is the other end of the cave.  If you climb over the lava ruble and then turn left and go another 300 ft you come out on top again. 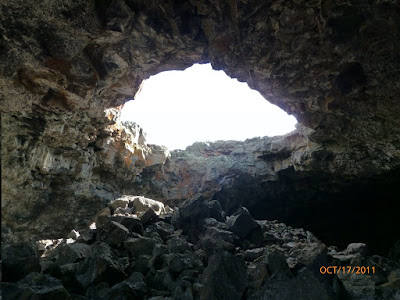 This side trip was well worth the effort.  If you go be sure to have sturdy shoes and be able to spend at least 2 hrs there.  Better yet stay at their campground and then you can enjoy  some of the many trails every where.

Craters of the Moon is where NASA's Apollo Astronauts Alan Shepard, Edgar Mitchell, Eugene Cernan and Joe Engle learned basic volcanic geology in 1969 as they prepared for their moon missions.

The early pioneers on the Oregon Trail went along the Snake River to the south of Craters of the Moon, however there was a group of them that took a short cut called Goodale's Cutoff that went on the north side of the Craters of the Moon.

Posted by Joe and Nancy Conrad at 9:18 PM