Our favorite cheese place, Loletta Cheese Factory was closed, can you imagine that, closed on 4th of July, Ha Ha, just kidding.  They deserve a break too.  Just a little north of Ferndale, CA on Hwy 101 is the town of Loletta and the Loletta Cheese Factory.  We usually stop there and stock up on their delicious cheeses.  We have watched this mom and pop place grow from a small store front to beautiful gardens out back, a gift shop and last time we were here (at least 7 or 8 years ago) we heard that they had even acquired their own dairy farm.  I just love to see these small town entrepreneurs make good.  We could order by mail but it's more fun to stop at their shop.  If you are in the area it's worth a stop.  Plenty of room to turn around.

Onward to our next favorite place is lunch at Crescent City.  I'm not sure of the name of the place but it is a big tall two story white building in the parking lot of The Citizen's Pier, sort of to the south.  Their fish is fresh, fresh, fresh, right off the boat.  We have had dinner and lunch there over the last 30 plus years and it has always been good.  The white two story building is the new place.  The old place was blue I think.  It was really old, it always scared me when we climbed the rickety old steps to get to the restaurant.  Fond memories.

So after a great lunch of ling cod and coleslaw we headed up the coast to Gold Beach, Oregon and the Motel 6 again.  This is where the famous Jerry's Jet Boats go up the Rouge River.  They have various lengths of the trips, but since we decided two days ago to go it was going to be all the way or nothing.  We signed up for the 104 mile round trip experience.  This was a first for both of us.  The trip left at 0800 sharp boarding at 0745 and Buddy to the day care place at 0730.  AM.

Our trip was a BLAST! You have to put this on your "Bucket List".  We got back at 3:20.  Half way up was a potty break and then on the way back was a lunch stop.  The pictures are still only from my phone and it was very sunny out and Capt Jeff likes to spin us around a lot.  I am having to use the phone for pictures a lot because SOMEBODY left the camera's power cord at home.


It was a bit chilly when we took off but clear blue skies just a little ways up the river. 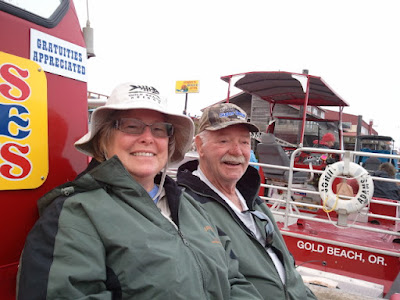 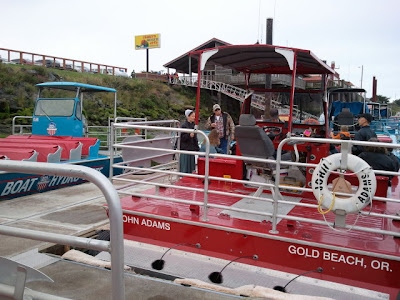 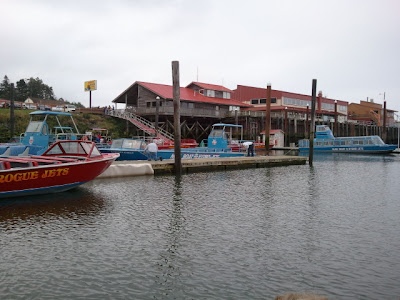 This is one of those old beautiful bridges, started building it in 1961 and completed it in late 1962.  In December 1964 the year of the 100 year flood the water almost went over the top of the bridge.  The great flood of 1964 was disastrous for the entire coast.  The Eel River down in the Redwoods of California flooded and there are still high water marks above the new Hwy.


From Wikipedia, the free encyclopedia
In 1964, a severe Pineapple Express event, known as the Christmas flood of 1964, brought heavy rains to coastal northern California. The Eel River drainage area was particularly hard hit. As it lies close to the coast and mostly without dams, the storm produced a flow of more than 750,000 cu ft/s (21,000 m3/s), including 200,000 cu ft/s (5,700 m3/s) from the South Fork alone. Almost every river town was submerged, bridges were destroyed, and some were never rebuilt. The deepest floodwaters were nearly 70 feet (21 m) above the normal river level. The Eel River estuary and its bordering towns—Rio Dell and Ferndale—were particularly hard hit. Several thousand people were left homeless by the floods and hundreds of head of livestock were lost.

I only mention the flood because as a child we often camped in the Redwoods and every where we went camping was no longer there and the river had actually changed course in the area of Big Basin State Park and probably many other places.  I was in high school at the time of this flood, living in Sacramento. 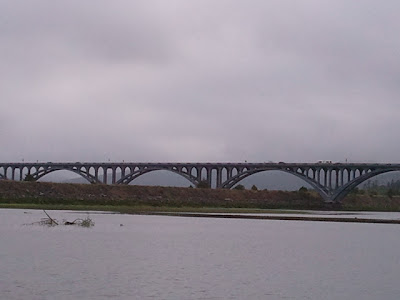 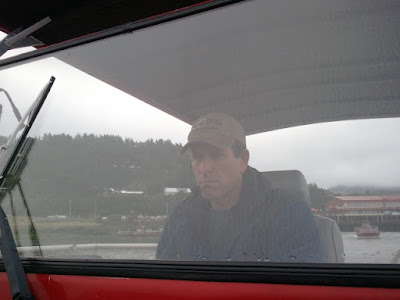 Same bridge, after we went under the bridge Jeff turned the boat around to get another look at it 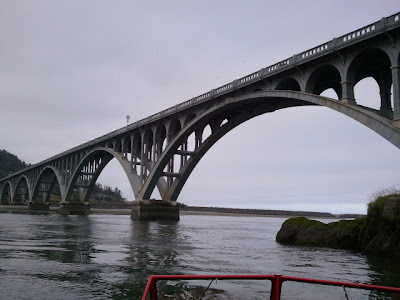 We saw MANY eagles, osprey and fledglings of both. 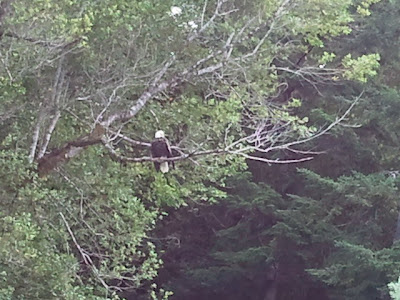 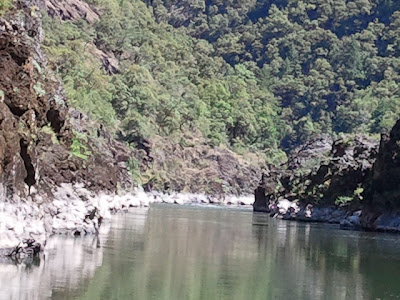 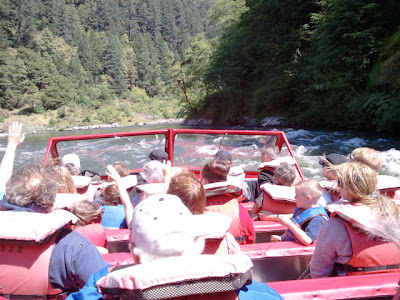 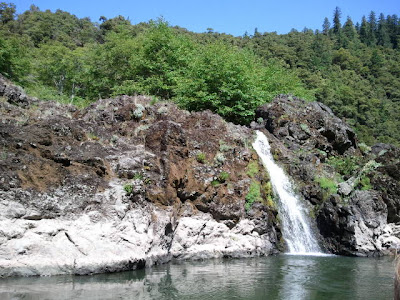 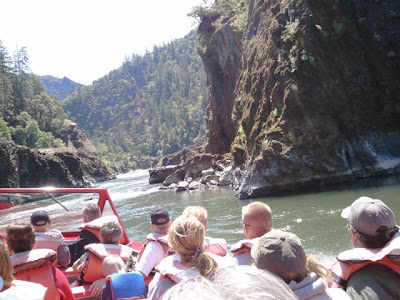 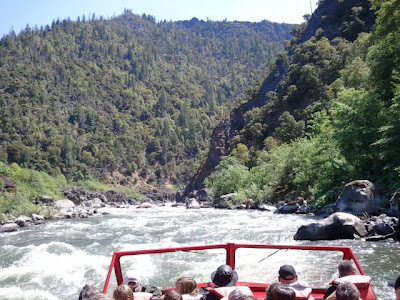 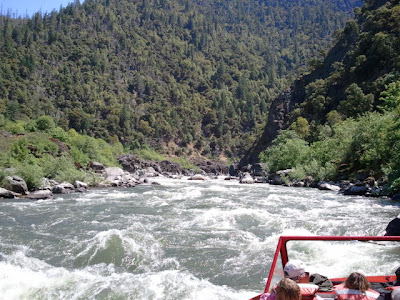 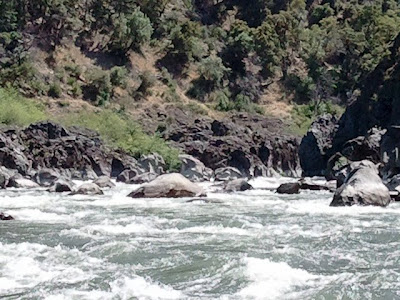 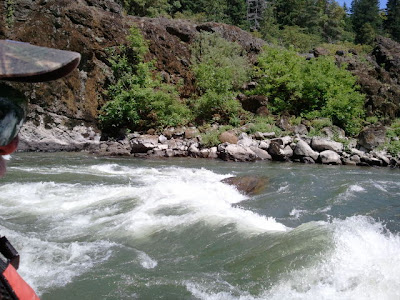 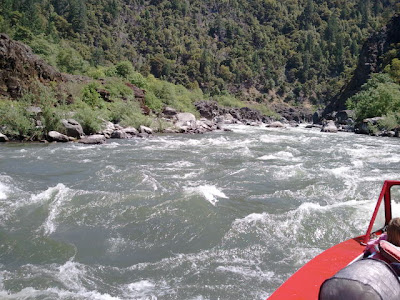 They have many years when the river gets real high but not called a flood.  Can you see the long tree trunk sitting on top of the rock? 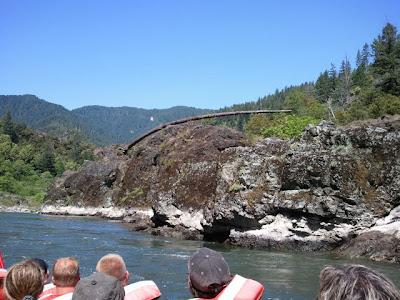 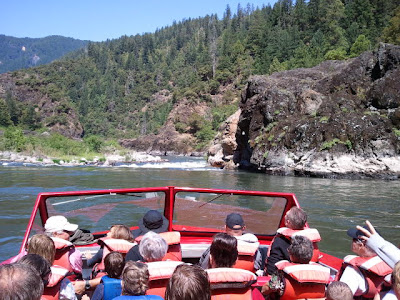 I don't remember Jeff's dog's name, she goes on every trip 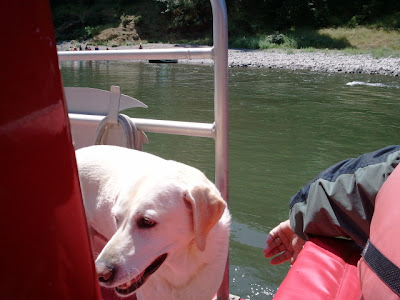 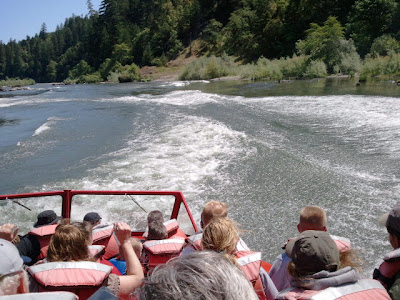 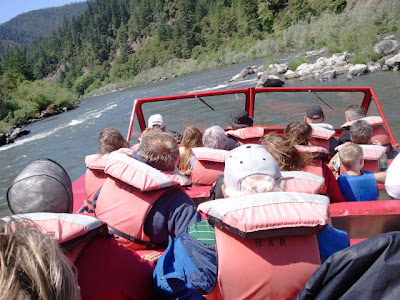 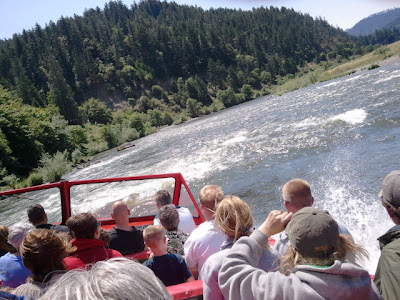 A view from the deck where we had lunch. 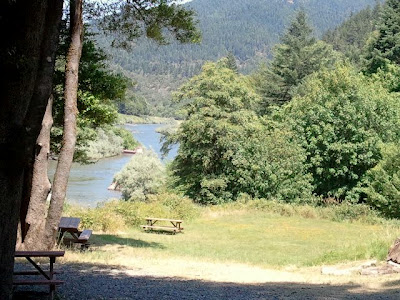 Taking a short little rest in a cove out of the wind.  The boat had three very large engines and Capt Jeff is a real professional getting us around every rock and then some fun spins in the calm waters. 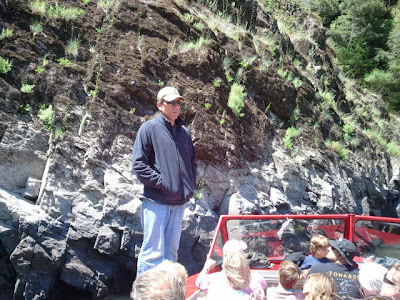 We saw lots of deer and several river otters along the way.
This little guy was sharing the cove with us. 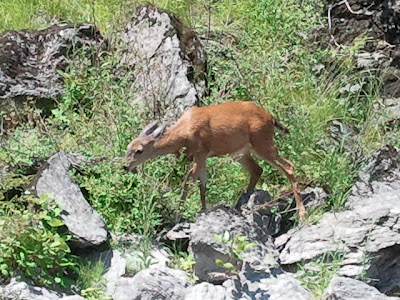 Wow! what a great day we had.  When we made the reservations they had names of Doggie Day Care Places.  The one we had, the lady met us at the boat to pick up Buddy and then brought him back at the proper time.  She had two dogs and she just lets them play in the house.  She even took pictures of Buddy and emailed them to me.   Her name was Sandy but I don't remember the name of the day care. We would definitely use her again.

The next day we drove home, but along the way we ran across another herd of elk.  There were at least 11 of these bull elks.  No cows.  We were told, by an 8year old that this time of year all the Mommy elks are off taking care of the babies and the Daddy elks are over here for us to see.  The grasses are so tall you have to look really hard to see them.  Can you spot them? 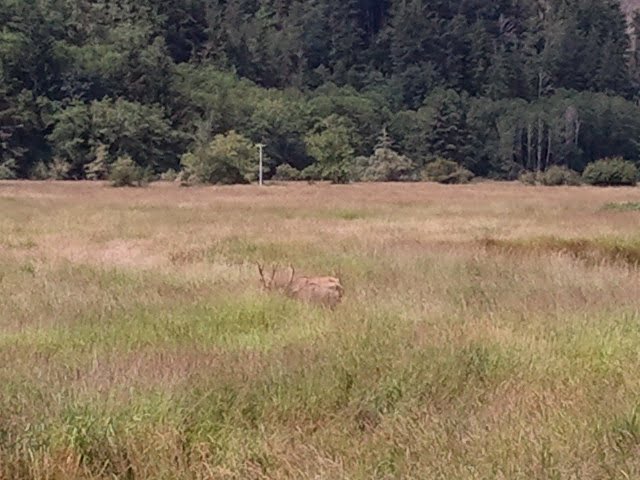 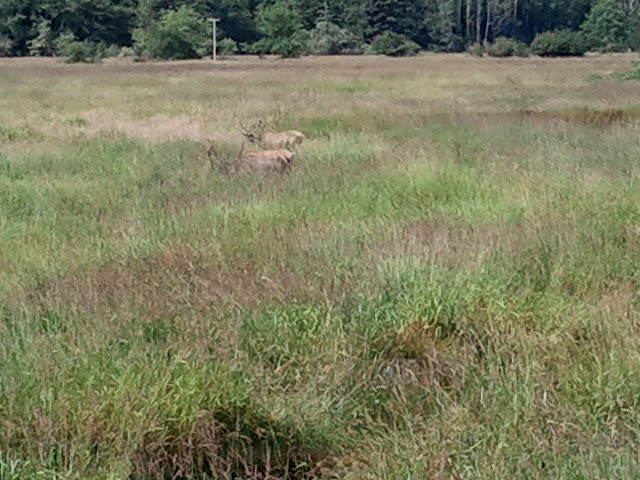 Well home again, I sure missed our trailer.  We don't very often go on a week long trip in just the car.  Our Ford diesel avg 12 mpg when pulling the trailer and the VW Jetta diesel avg 42 mpg.  With all the expense of hotels and eating out all the time it is probably the same cost.  Of course if we were to go 2 - 3 weeks by car I don't think we could afford it.  Not only that but our beds in the trailer are pretty darn comfortable and of course we have all our stuff to make it comfortable.

Well that's it,  safe travels to all and thanks for stopping by.

Posted by Joe and Nancy Conrad at 8:56 PM